Before studying this section in detail, you should review conjugate addition to α,β‑unsaturated carbonyl compounds (Section 19.13).

Notice the wide variety of compounds that can take part in a Michael reaction. As usual, you should not feel overwhelmed by the number of different compounds that can be used, just keep in mind that in all cases the mechanism is essentially the same.

Certain nucleophiles undergo conjugate addition with the alkene of an α, β-unsaturated carbonyl compounds rather than undergo direct nucleophilic addition with the carbonyl. During conjugate addition, a nucleophile adds to the electrophilic β-alkene carbon to from a C-Nuc bond. If the starting materials contains an ester the corresponding alkoxide is used as the base in the reaction. Otherwise a hydroxide base, such as sodium or potassium hydroxide, is commonly used.

When enolate nucleophiles undergo conjugate addition with an α, β-unsaturated carbonyl the process is called a Michael Reaction. The Michael reaction works best with particularly acidic enolate donors such as malonic esters, β-keto esters, ect. Enolates which are weaker acids tend to undergo nucleophilic addition to the carbonyl rather than conjugate addition. For example, malonic ester’s acidic alpha-hydrogens can be easily deprotonated by sodium ethoxide to form an enolate. The enolate adds to propenal to form the conjugate addition product.

Predicting the Product of a Michael Reaction

a. In the first step, remove the double bond and add two single bonds

b. Add a hydrogen to the bond adjacent to the carbonyl

What would be the product of the following conjugate addition?

Notice that the Michael Reaction does not require the deprotonation of the product to push the reaction towards completion. The reaction is thermodynamically favorable because the C-C bond formed in the product is stronger than the C=C bond in the starting material. This means that, unlike the Claisen condensation, this reaction only requires a catalytic amount of reaction base.

The alkoxide base removes an alpha-hydrogen to from an enolate nucleophile.

2) Nucleophilic attack on the carbon β to the carbonyl

The enolate nucleophile then adds to the electrophilic β-carbon of the α, β-unsaturated carbonyl. Conjugation pushes the C=C pi bond electrons onto the carbonyl oxygen, forming a new enolate enolate.

The alkoxide is protonated, forming an enol.

Tautomerization converts the enol back into a carbonyl forming the neutral conjugate addition product.

The Michael reaction can be performed with a wide variety of α, β-unsaturated carbonyl electrophilic acceptors and enolate donors. Michael acceptors such as α, β-unsaturated ketones, aldehydes, esters, amides, and nitro compounds can all participate in this reaction. Michael donors with particularly acidic α-hydrogens, such as β-diketones, β-keto esters, β-keto nitriles, α-nitro ketones, malonic esters, and nitro compounds can be used. 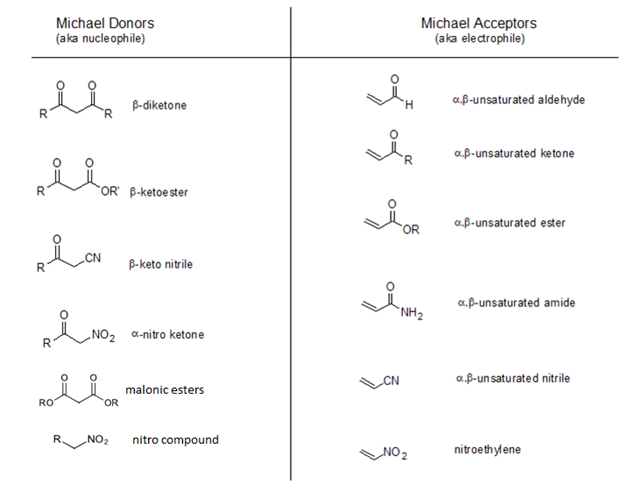 Table \(\PageIndex{1}\): Possible Donors and Acceptors Which can be used in a Michael Reaction

The true utility of the Michael reaction is seen when considering it use in a synthesis. The reaction can be used to prepare aldehydes, ketones, esters, amides, nitriles, and nitro compounds. A target molecule can possibly be made using a Michael reaction if it contains one of these functional groups and an alkyl chain at least three carbons long. The key bond cleavage is a C-C bond between β and gamma carbons from a carbonyl-like group. The fragment with the Y group loses an α-hydrogen and then forms a C=C bond between the α and beta carbon. The carbon of the other fragment gains a hydrogen. This fragment should possess an acidic α-hydrogen and should be made up of Michael donor fragments such as those listed in Table \(\PageIndex{1}\). In some cases, there may be more than one fragmentation variation. Each variation should be investigated and the possible starting materials compared for viability.

How could the following molecule be synthesized using a Michael Reaction?

In combination with alkylations and condensations, the Michael reaction may be used to construct a wide variety of complex molecules from relatively simple starting materials. The carbon nucleophiles used in the following examples include cyanide ion, sodium diethylmalonate and the conjugate base of cyclohexane-1,3-dione. These anions are sufficiently stable that their addition reactions may be presumed reversible. If this is so, the thermodynamic argument used for hetero-nucleophile additions would apply here as well, and would indicate preferential formation of 1,4-addition products. Cyanide addition does not always follow this rule, and aldehydes often give 1,2-products (cyanohydrins). In each case the initial reaction is a Michael addition, and the new carbon-carbon bond is colored magenta. Any subsequent bonds that are formed by other reactions are colored orange.

1) Provide the products of the following Michael additions: 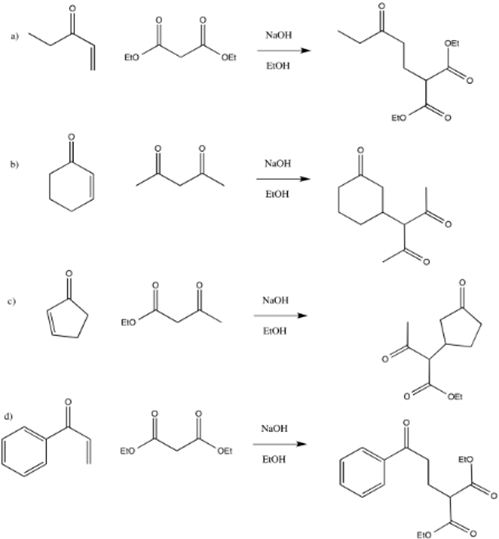