You should be careful to remember that iodine and fluorine cannot be introduced into an aromatic ring by the method used for bromine and chlorine. On its own, iodine is unreactive with aromatic rings, but one method for aromatic iodination is treatment in the presence of a copper salt such as copper(II)chloride where I2 is oxidized to the more electrophilic species I+.

In contrast, fluorine is too reactive, so it cannot be used directly for aromatic flourination. However, fluorinating agents like 1-(chloromethyl)-4-fluoro-1,4-diazoniabicyclo[2.2.2]octane ditetrafluoroborate (also known as F-TEDA-BF4) sold commercially as Sectfluor® offer convenient sources of “F+” for this type of reaction.

The ability of compounds such as nitronium tetrafluoroborate to bring about the nitration of aromatic compounds is good evidence in support of the proposed mechanism.

The nitration of an aromatic ring is an important synthetic pathway to generating arylamines. The reaction below shows one common method of reducing the nitro group. (Amines are examined in more detail in Chapter 24.) 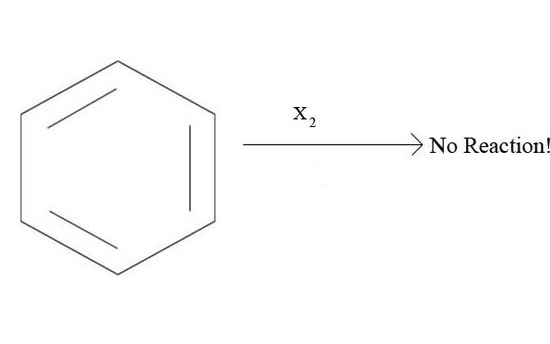 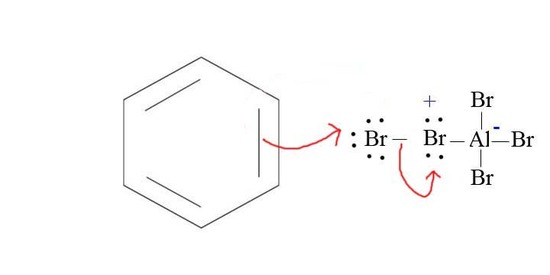 The electrophillic bromination of benzenes is an exothermic reaction. Considering the exothermic rates of aromatic halogenation decreasing down the periodic table in the Halogen family. Flourination is the most exothermic and Iodination would be the least. Being so exothermic, a reaction of flourine with benzene is explosive! For iodine, electrophillic iodination is generally endothermic, hence a reaction is often not possible. Similar to bromide, chlorination would require the aid of an activating presence such as Alumnium Chloride or Ferric Chloride. The mechanism of this reaction is the same as with Bromination of benzene.

What is the product of the following reaction:

Why is it important that the nitration of benzene by nitric acid occurs in sulfuric acid?

Write a detailed mechanism for the sulfonation of benzene, including all resonance forms.

Draw an energy diagram for the nitration of benzene. Draw the intermediates, starting materials, and products. Label the transition states.

In each case, how many products would be possible for the bromination of p-xylene, o-xylene, and m-xylene?

If toluene is treated with D2SO4 all the hydrogen’s are replaced with deuterium. Explain.