Make sure that you understand that the s-cis and s-trans forms of a diene such as 1,3-butadiene are conformers, not isomers. Note that some textbooks can confuse the issue further by referring to a compound such as (2Z, 4Z)-hexadiene as cis, cis-2,4-hexadiene, and saying that the most stable form of this compound is its s-trans conformer!

In fulfilling Objective 2, above, you must recognize that the Diels-Alder reaction is stereospecific.

In general, Diels-Alder reactions proceed fastest with electron-withdrawing groups on the dienophile (diene lover). Ethylene reacts slowly while propenal, ethyl propenoate, and other molecules shown below are highly reactive in a Diels-Alder reaction. The Diels-Alder reaction is enormously useful for synthetic organic chemists, not only because ring-forming reactions are useful in general but also because in many cases multiple new stereocenters are formed, and the reaction is inherently stereospecific. During a Diels-Alder reaction the stereochemistry of the dienophile is retained in the product. A cis dienophile will generate a cyclohexene ring with cis (syn) substitution on the two carbons from the dienophile. Likewise a trans dienophile will generate a cyclohexene ring with trans (anti) substitution on these two carbon. 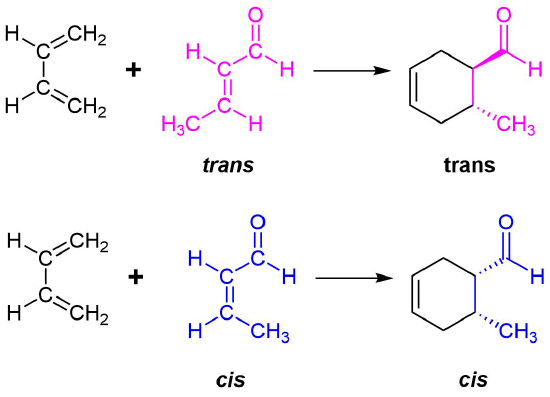 The retention of stereochemistry is due to the planar nature of both reactants and that the forming process is suprafacial (i.e. to or from the same face of each plane). This stereospecificity also confirms the concerted nature of the Diels-Alder mechanism. The drawing below illustrates this fact for the reaction of 1,3-butadiene with (E)-dicyanoethene. The trans relationship of the cyano groups in the dienophile is preserved in the six-membered ring of the adduct.

Another facet of the stereochemical retention of the dienophile is that only the endo product, rather than the alternative exo product, is formed. The words endo and exo are used to indicate relative stereochemistry when referring to bicyclic structures like substituted norbornanes. The endo position on a bicyclic structure refers to the position that is inside the concave shape of the larger (six-membered) ring. As you might predict, the exo position refers to the outside position. Diels-Alder reactions with cyclic dienes favor the formation of bicyclic structures in which substituents are in the endo position. Preference of the endo position is also a facet of the suprafacial nature of the Diels-Alder reaction. The orbital overlap required for the reaction is greater when the dienophile lies directly underneath the diene.

For some dienes, extreme steric hindrance causes the s-cis conformation to be highly strained, and for this reason such dienes do not readily undergo Diels-Alder reactions. The Essential Characteristics of the Diels-Alder Cycloaddition Reaction:

Predicting the Product of a Diels-Alder Reaction

Determine if any substituents attached to either the double bond of the dieneophile or carbons 1 and 4 of the diene have a cis/trans conformation. If so make sure the substituents have the same configuration in the cycloalkene product.

The diene is locked into an s-cis configuration which will promote the reaction. The ring portion of the diene will act as electron donating groups which will also promote the reaction.  Because the diene already contained a ring the product will be bicyclic. The dienophile has two nitriles attached to it both of which are electron withdrawing. Since the two nitriles in the dieneophile are cis to each other the the two nitriles will be cis to each other in the product.

A particularly rapid Diels-Alder reaction takes place between cyclopentadiene and maleic anhydride. Cyclopentadiene is held in the required s-cis configuration so it will make a good diene for a Diels-Alder reaction. Maleic anhydride is also a very good dienophile, because the electron-withdrawing effect of the carbonyl groups causes the two alkene carbons to be electron-poor, and thus a good target for attack by the pi electrons in the diene. Since it is part of a ring, the double bond of maleic anhydride is in a cis configuration so the cyclohexene ring will also have a cis configuration. Lastly, the product will prefer the endo position.

7) Of the following dienes, which are S-trans and which are s-cis? Of those that are s-trans, are they able to rotate to become s-cis? 8) Predict the product of the following reaction.