Conjugated dienes undergo the usual reactions of alkenes, such as catalytic hydrogenation, radical additions, and electrophilic additions more readily than most alkenes or dienes that have isolated double bonds. During the electrophilic addition of one equivalent of HX to a conjugated diene, the expected Markovnikov addition product is formed during a process called 1,2-addition. In addition, an unexpected product is formed from 1,4-addition, i.e. the halogen bonds at the terminal carbon atoms of a conjugated diene and the remaining double bond shifts to the 2,3-location. Note, the numbers (1 and 4) refer to which of the four carbons making up the conjugated diene the H and Br are bonded to in the products and are not used for the compounds IUPAC nomenclature. Although there are various methods for effecting the relative ratio of 1,2 and 1,4 addition products during the electrophilic addition to a conjugated diene, a mixture of these products is almost always produced. When one equivalent HBr undergoes electrophilic addition to 1,3-butadiene, 1,2 addition provides the expected Markovnikov product 3-bromo-1-butene in a 70% yield. This process is called a 1,2 addition because the hydrogen from HBr (labeled blue) bonds to the first carbon of the diene and the bromine from HBr bonds to the second carbon of the diene. The compound 1-bromo-2-butene is also produced in a 30% yield during the reaction as product of 1,4 addition. Here the hydrogen of HBr bonds to the first carbon of the diene and the Br bonds to the fourth carbon of the diene. 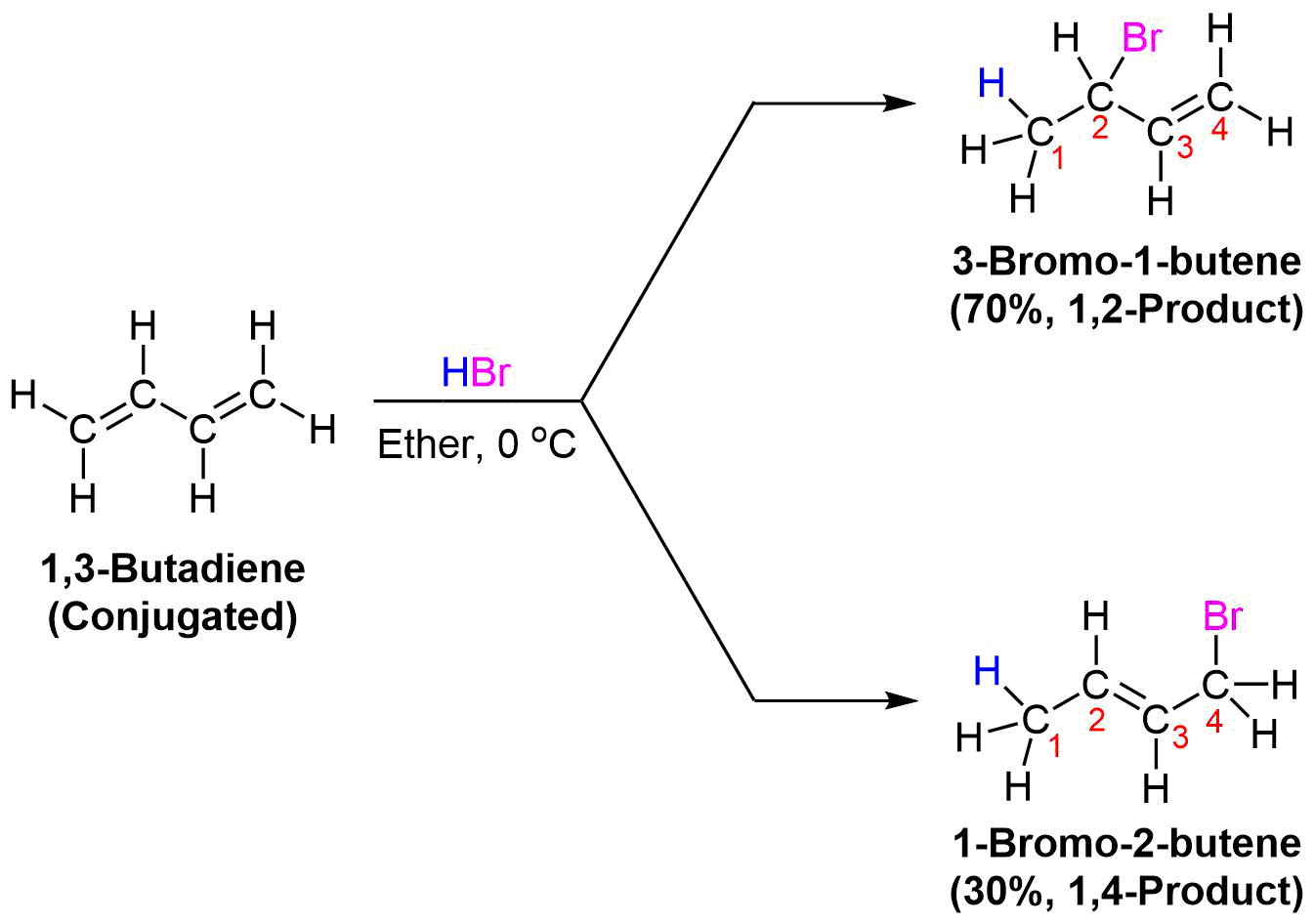 The Mechanism for Electrophilic Addition of HBr to a Conjugated Diene

Regardless if the 1,2 or 1,4 addition product is formed, the first step of the mechanism is the protonation of one of the double bonds. In the same manner as the electrophilic addition of HX to an alkene, the protonation occurs regioselectively to give the more stable carbocation. In the case of a conjugated diene, the more stable cation is not only secondary, but also allylic, and therefore enjoys the stabilization created from the positive charge being distributed over two carbons by resonance. The resonance hybrid of the allylic carbocation intermediate can be depicted by two resonance forms (shown below) both of which have a full positive charge. 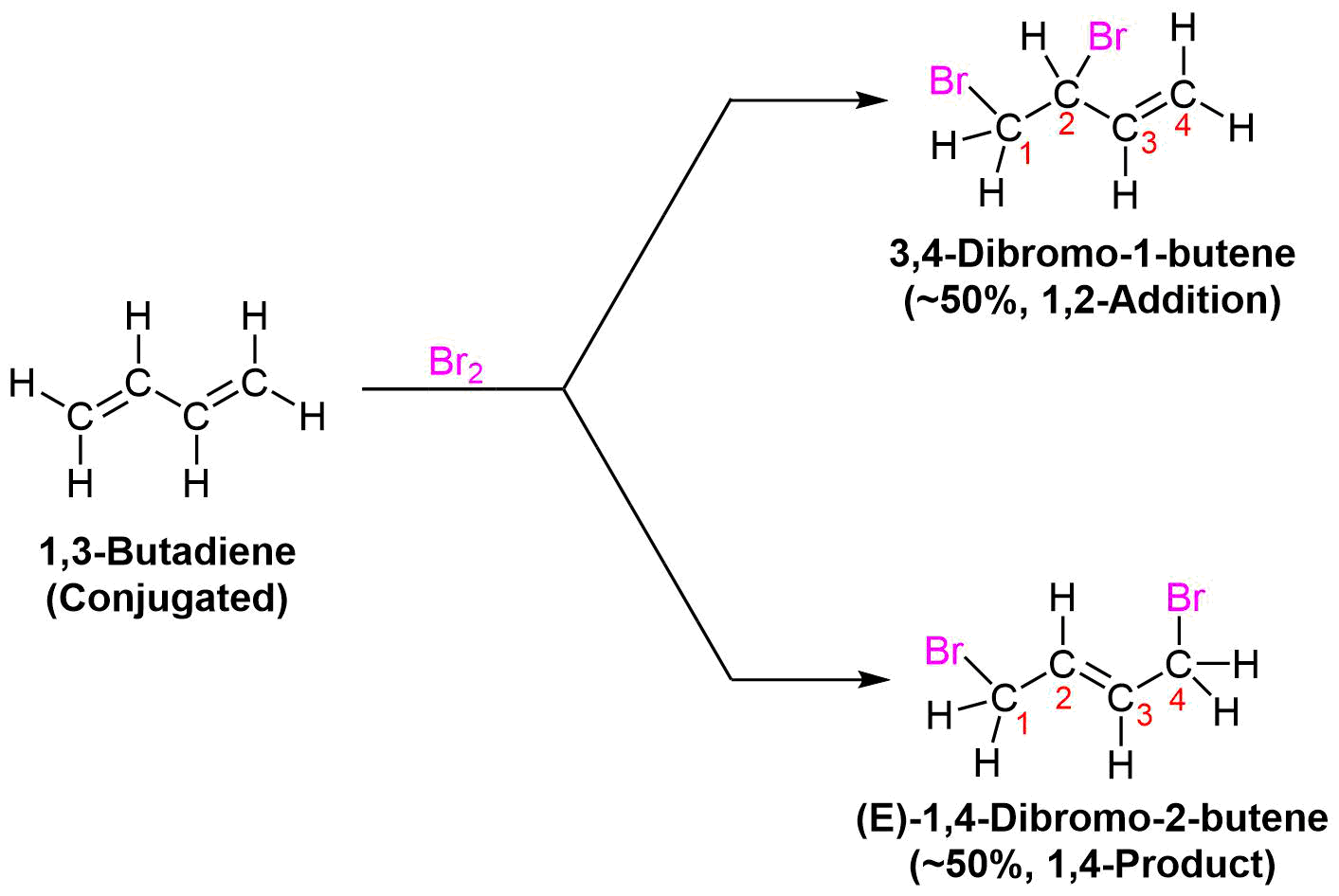 Give the expected products from the following reaction. Show both 1,2 and 1,4 addition products.

For this example the two double bonds in the diene are not equivalent and must be considered separately.  Each double bond of the reactant has the possibility of forming a 1,2 and a 1,4 addition product so the reaction has the possibility of forming four product.  Protonate each double bond separately and draw out the resonance forms of the allylic carbocation intermediate created.  Then react each resonance form with Br- to create the two possible products.  Repeat this process with the second double bond to create the four possible product.  Lastly, look for symmetry in the products to see if any are same molecule.  Also, consider the stability of each carbocation created during this process.  The most stable carbocation will generally product the favored product of the reaction. Addition to the second double bond creates a symmetrical compound so only one product is formed. Over the reaction proposed would be expected to form three products.

2) Look at the previous addition reaction of HBr with a diene. Consider the transition states, predict which of them would be the major products and which will be the minor. 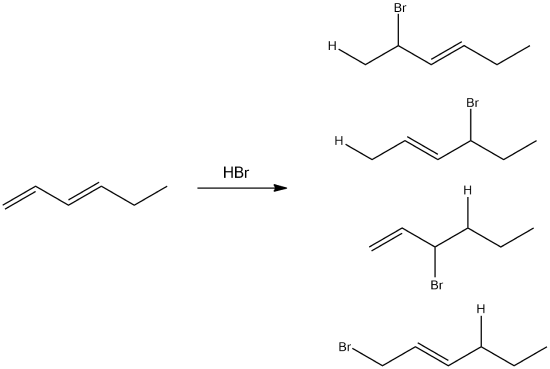 2) The products i-iii all show a secondary cation intermediate which is more stable than primary. Therefore those would be major products and the iv product would be the minor product. 4) Addition of the HX to unsubstituted cycloalka-1,3-dienes in either 1,2- or 1,4- manner gives the same product because of symmetry.