Note that in radical chlorination reactions, the reactivity of methine, methylene and methyl hydrogens decreases in the ratio of approximately 5 : 3.5 : 1. This will aid in the prediction of expected products from the monochlorination of a given alkane.

Alkanes (the simplest of all organic compounds) undergo very few reactions. One of these reactions is halogenation, or the substitution of a single hydrogen on the alkane for a single halogen (Cl2 or Br2) to form a haloalkane. This reaction is very important in organic chemistry because it functionalizes alkanes which opens a gateway to further chemical reactions.

The reaction proceeds through the radical chain mechanism which is characterized by three steps: initiation, propagation, and termination. Initiation requires an input of energy but after that the reaction is self-sustaining.

During the initiation step free radicals are created when ultraviolet light or heat causes the X-X halogen bond to undergo homolytic to create two halogen free radicals. It is important to note that this step is not energetically favorable and cannot occur without some external energy input. After this step, the reaction can occur continuously (as long as reactants provide) without input of more energy. In the three termination steps of this mechanism, radicals produced in the mechanism an undergo radical coupling to form a sigma bond. These are called termination steps because a free radical is not produced as a product, which prevents the reaction from continuing. Combining the two types of radicals produced can be combined to from three possible products. Two chlorine radicals and couple to form more halogen reactant (Cl2). A chlorine radical and a methyl radical can couple to form more product (CH3Cl). An finally, two methyl radicals can couple to form a side product of ethane (CH3CH3). Why do these reactions occur? Is the reaction favorable? A way to answer these questions is to look at the change in enthalpy ΔH that occurs when the reaction takes place.

ΔH = (Energy put into reaction) – (Energy given off from reaction) Let’s look at our specific example of the chlorination of methane to determine if it is endothermic or exothermic: 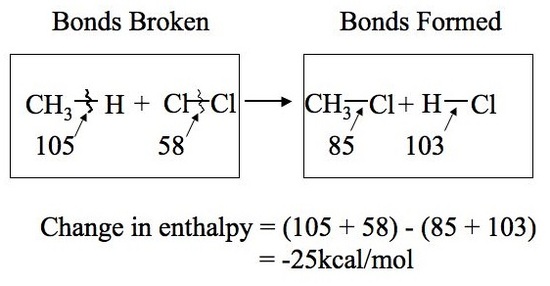 Chlorination of Other Alkanes

When alkanes larger than ethane are halogenated, isomeric products are formed. Thus chlorination of propane gives both 1-chloropropane and 2-chloropropane as mono-chlorinated products. The halogenation of propane discloses an interesting feature of these reactions. All the hydrogens in a complex alkane do not exhibit equal reactivity. For example, propane has eight hydrogens, six of them being structurally equivalent primary, and the other two being secondary. If all these hydrogen atoms were equally reactive, halogenation should give a 3:1 ratio of 1-halopropane to 2-halopropane mono-halogenated products, reflecting the primary/secondary numbers. This is not what we observe. Light-induced gas phase chlorination at 25 ºC gives 45% 1-chloropropane and 55% 2-chloropropane.

The Relative Reactivity of Hydrogens to

This difference in reactivity can only be attributed to differences in C-H bond dissociation energies. In our previous discussion of bond energy we assumed average values for all bonds of a given kind, but now we see that this is not strictly true. In the case of carbon-hydrogen bonds, there are significant differences, and the specific dissociation energies (energy required to break a bond homolytically) for various kinds of C-H bonds have been measured. These values are given in the following table.

Write out the complete mechanism for the chlorination of methane.

The answer to this problem is actually above in the initiation, propagation and termination descriptions.

Explain, in your own words, how the first propagation step can occur without input of energy if it is energetically unfavorable.

Since the second step in propagation is energetically favorable and fast, it drives the equilibrium toward products, even though the first step is not favorable.

Which step of the radical chain mechanism requires outside energy? What can be used as this energy?

Initiation step requires energy which can be in the form of light or het.

Bonds broken are C-H and Br-Br.

-10 kcal/mol = change in enthalpy for bromination of ethane.

2) Predict the relative amount of each mono-brominated product when 3-methylpentane is reacted with Br2. Consider 1°, 2°, 3° hydrogen.

3) For the following compounds, give all possible monochlorinated derivatives.