Finally, hydrogens that can be designated neither enantiotopic nor diastereotopic are called homotopic. If a homotopic hydrogen is replaced by deuterium, a chiral center is not created. The three hydrogen atoms on the methyl (CH3) group of ethanol (and on any methyl group) are homotopic. An enzyme cannot distinguish among homotopic hydrogens. When the two groups adjacent to a carbonyl (C=O) are not the same, we can distinguish between the re and si 'faces' of the planar structure. The concept of a trigonal planar group having two distinct faces comes into play when we consider the stereochemical outcome of a nucleophilic addition reaction. Nucleophilic additions to carbonyls will be covered in greater detail in Chapter 19. Notice that in the course of a carbonyl addition reaction, the hybridization of the carbonyl carbon changes from sp2 to sp3, meaning that the bond geometry changes from trigonal planar to tetrahedral. If the two R groups are not equivalent, then a chiral center is created upon addition of the nucleophile. The configuration of the new chiral center depends upon which side of the carbonyl plane the nucleophile attacks from. Reactions of this type often result in a 50:50 racemic mixture of stereoisomers, but it is also possible that one stereoisomer may be more abundant, depending on the structure of the reactants and the conditions under which the reaction takes place.

Below, for example, we are looking down on the re face of the ketone group in pyruvate. If we flipped the molecule over, we would be looking at the si face of the ketone group. Note that the carboxylate group does not have re and si faces, because two of the three substituents on that carbon are identical (when the two resonance forms of carboxylate are taken into account). 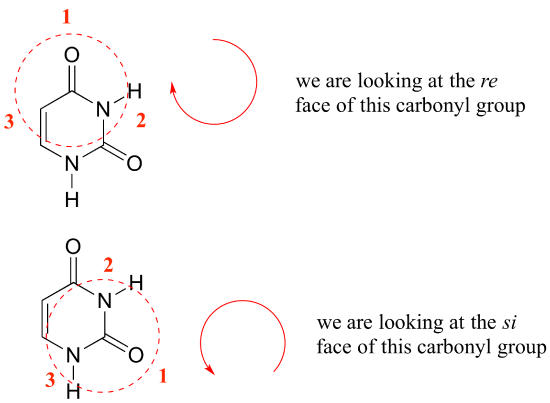 a) State which of the following hydrogen atoms are pro-R or pro-S.

b) Identify which side is Re or Si.

State whether the H's indicated below are pro-R or pro-S for the following structures.

In the structures below, determine if the H's are homotopic, enantiotopic, or diastereotopic.

State whether you are looking down at the molecule from the re face or si face.

a) You are looking at the si face. The re face would be if you were facing the molecule from the back.

b) You are looking at the re face. The si face would be if you were facing the molecule from the back.