Similarly to carboxylic acids, inorganic acids such as nitric acid (HNO3), sulfuric acid (H2SO4), and phosphoric acid (H3PO4) also can form esters. The esters of phosphoric acid are especially important in biochemistry. A phosphoric acid molecule can form a monoalkyl, a dialkyl, or a trialkyl ester by reaction with one, two, or three molecules of an alcohol. Phosphatidic acid is converted into a glycerophospholipid by esterifying various groups, such as ethanolamine, serine, choline, inositol, and others to the phosphate of phosphatidic acid. These compounds have a chiral center at C2 and have an R configuration when found in nature. 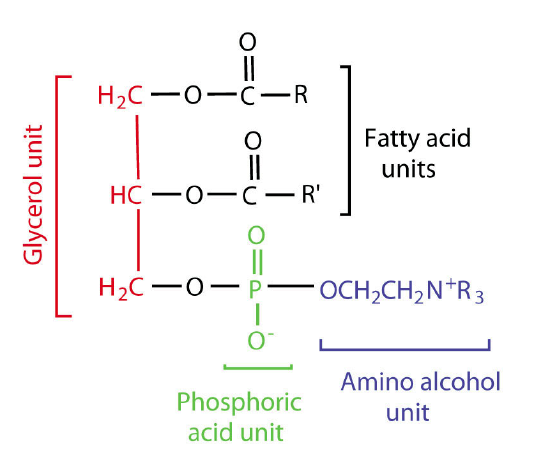 The phosphatidylethanolamines are found in all living cells and are one of the most common phosphatides. They are common constituents of brain tissue and in the spinal cord, making up as much as 45% of the total phospholipids. Phosphatidylethanolamines are asymmetrically distributed across membranes, being preferentially located on the inner leaflet (closest to the cytoplasm) of the plasma membrane. Phosphatidylserine, a polar phospholipid. A serine head group has been added on to a phosphate group on a glycerol functional group, all shown in orange.

The fatty acid chains are in blue.

Sphingomyelins, the simplest sphingolipids, each contain a fatty acid, a phosphoric acid, sphingosine, and choline. Because they contain phosphoric acid, they are also classified as phospholipids. Sphingomyelins are important constituents of the myelin sheath surrounding the axon of a nerve cell. Multiple sclerosis is one of several diseases resulting from damage to the myelin sheath. 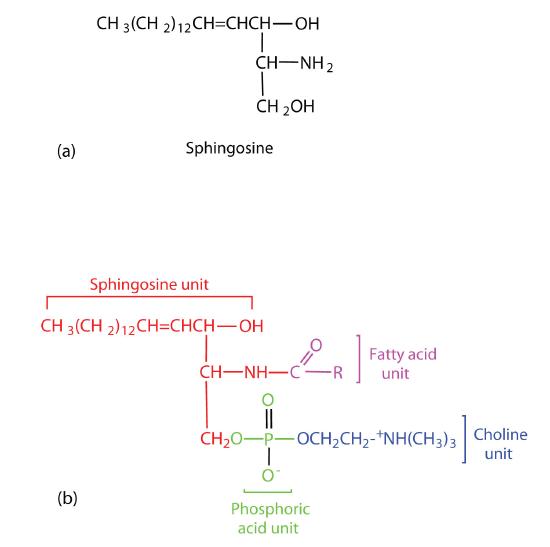 In one sense the polar lipids are like the anions of fatty acids, only more so. They contain two hydrophobic hydrocarbon tails and a head which may have several electrically charged sites. As in the case of soap and detergent molecules, the tails of polar lipids tend to avoid water and other polar substances, but the heads are quite compatible with such environments.

As ionic amphiphiles, phospholipids aggregate or self-assemble when mixed with water, but in a different manner than the soaps and detergents. Because of the two pendant alkyl chains present in phospholipids and the unusual mixed charges in their head groups, micelle formation is unfavorable relative to a bilayer structure. If a phospholipid is smeared over a small hole in a thin piece of plastic immersed in water, a stable planar bilayer of phospholipid molecules is created at the hole. As shown in the following diagram, the polar head groups on the faces of the bilayer contact water, and the hydrophobic alkyl chains form a nonpolar interior.

Organization of the lipid bilayer Image by Aleia Ki

The polar lipids are most commonly found as components of cell walls and other membranes. Nearly all hypotheses regarding membrane structure take as a fundamental component a lipid bilayer. Bilayers made in the laboratory have many properties in common with membranes. Ions such as Na+, K+, and Cl– cannot pass through them, but water molecules can. Certain carrier molecules can transport K+ and other ions across a bilayer, apparently by wrapping a hydrophobic cloak around them to disguise their charges. Membrane proteins in a bilayer also allow for transport of ions and other molecules across the bilayer which could not cross otherwise.