The members of this group of structurally related natural hormones have an extraordinary range of biological effects. They can lower gastric secretions, stimulate uterine contractions, lower blood pressure, influence blood clotting and induce asthma-like allergic responses. Because their genesis in body tissues is tied to the metabolism of the essential fatty acid arachadonic acid (5,8,11,14-eicosatetraenoic acid) they are classified as eicosanoids. Many properties of the common drug aspirin result from its effect on the cascade of reactions associated with these hormones.  Eicosanoids include prostaglandins, leukotrienes, and thromboxanes.

Structures for prostaglandins PGG, PGH and PGI and thromboxanes TXA and TXB

Thus the molecule PGH2 means that it has the prostaglandin ring system with a type H Substitution pattern. The subscript 2 indicated that the molecule contains two double bonds.

Prostaglandins were first discovered and isolated from human semen in the 1930s by Ulf von Euler of Sweden. Thinking they had come from the prostate gland, he named them prostaglandins. It has since been determined that they exist and are synthesized in virtually every cell of the body. Prostaglandins, are like hormones in that they act as chemical messengers, but do not move to other sites, but work right within the cells where they are synthesized.

Prostaglandins are found in low concentrations distributed in a large number of organs, tissues, and body fluids of mammals. They exhibit a broad spectrum of physiological activity and are remarkably potent. Their precise biological role is not entirely clear, but they are known to induce strong contractions of smooth muscle tissue (lungs, uterus) and to lower blood pressure and sodium levels. Prostaglandins also have been implicated in the control of pituitary hormones released from the hypothalamus, and in the incidence of "pain" as a response to fever and inflammation. In fact, the analgesic property of aspirin possibly may result from the inhibition of prostaglandin biosynthesis

Prostaglandins are unsaturated carboxylic acids, consisting of of a 20 carbon skeleton that also contains a five member ring and are based upon prostanoic acid, which is a C20 fatty acid in which there is a cyclopentane ring formed by connecting the C8 and C12 positions.

They are biochemically synthesized from the fatty acid, arachidonic acid.  The unique shape of the arachidonic acid caused by a series of cis double bonds helps to put it into position to make the five member ring of the prostaglandin.

There are a variety of functional groups present in prostaglandin structures.  The can have one, two, or three double bonds. On the five member ring there may also be double bonds, a ketone, or alcohol groups. Some typical structures are shown below.

Thromboxanes play roles in clot formation and named for their role in thrombosis. They are potent vasoconstrictors and facilitate platelet aggregation. They are synthesized in platelets, as well. The anti-clotting effects of aspirin have their roots in the inhibition of synthesis of PGH2, which is the precursor of the thromboxanes. The most common thromboxanes are A2 (Figure 2.217) and B2. 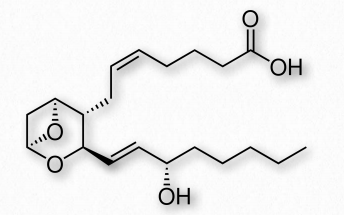 Another group of eicosanoid compounds are the leukotrienes (Figure 2.219). Like prostaglandins, leukotrienes are made from arachidonic acid. The enzyme catalyzing their formation is a dioxygenase known as arachidonate 5-lipoxygenase. Leukotrienes are involved in regulating immune responses. They are found in leukocytes and other immunocompetent cells, such as neutrophils, monocytes, mast cells, eosinophils, and basophils. Leukotrienes are associated with production of histamines and prostaglandins, which act as mediators of inflammation. Leukotrienes also trigger contractions in the smooth muscles of the bronchioles. When overproduced, they may pay a role in asthma and allergic reactions. Some treatments for asthma aim at inhibiting production or action of leukotrienes.

The biosynthesis of eicosanoids begins with the reaction of arachidonic acid with O2 which can be catalyzed by two different cyclooxygenase enzymes (COX-1 & COX-2).

In nature, prostaglandins arise by an oxidative cyclization of poly-unsaturated twenty-carbon fatty acids, which begins with enantiospecific removal of the L-hydrogen atom of the prochiral methylene group at C-13 coupled with enantiospecific introduction of oxygen at the allylic C-15 position. Subsequent cyclization and termination by addition of a second molecule of oxygen leads to a 15-hydroperoxy bicyclic peroxide (PGG), that is reduced to a 15-hydroxy bicyclic peroxide (PGH). These intermediates, known as prostaglandin endoperoxides, have been isolated and shown to yield prostaglandins. Reduction of the peroxy bridge gives PGF, while disproportionation gives β-hydroxy ketones PGE and PGD. The carbons in prostaglandins are numbered one to twenty starting at the carboxyl carbon and following the numbering system of the biosynthetic precursor fatty acids.