One of the most common occurrences of nitriles is nitrile rubber. Nitrile rubber is a synthetic copolymer of acrylonitrile and butadiene. This form of rubber is highly resistant to chemicals and is used to make protective gloves, hoses and seals. Nitriles can be synthesized from the reaction of nucleophilic cyanide with electrophilic groups, such as the carbonyls (aldehydes and ketones) and alkyl halides that are suitable for SN2 reactions. Amides can react with thionyl chloride to produce nitriles.

Addition of cyanide (-:C≡N) to an aldehyde or ketone forms a cyanohydrin.

Primary (1o) amides can be converted to nitriles by dehydration with thionyl chloride (or other dehydrating agents like P2O5, or POCl3).

For the reaction of primary amides with thionyl chloride, the mechanism begins with the lone pair of the nitrogen atom formimg a protonated imine and pushing the pi electrons of the carbonyl to form a sigma bond with the sulfur of thionyl chloride. The sulfonyl bond reforms in concert with the loss of the leaving group (Cl-). The protonated imine is neutralized by any base. The nitrile is produced by one last deprotonation reaction with a loss of sulfur dioxide and chloride as the leaving groups.

The complete mechanism is shown below. 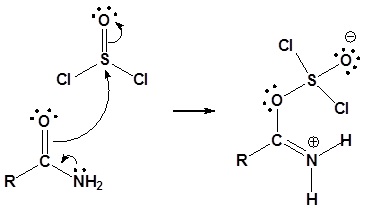 The carbon in a nitrile is electrophilic because a resonance structure can be drawn which places a positive charge on it. Because of this the triple bond of a nitrile accepts a nucleophile in a manner similar to a carbonyl.

Nitriles can be converted to carboxylic acid with heating in sulfuric acid. During the reaction an amide intermediate is formed.

The hydrolysis of cyclopentanecarbonitrile is shown below as an example.

Note that the presence of water is understood.

The mechanism begins with the protonation of the nitrile to make it more electrophilic to nucleophilic water. Once the water has reacted with the nitrile carbon, proton transfers occur to produce a resonance stabilized intermediate. Water acts as a weak base to deprotonate the carbonyl to form the amide which is hydrolyzed to the carboxylic acid.

6) Further hydrolysis of the amide shown in amide section of this chapter.

Nitriles can be reduced to primary amines with lithium aluminum hydride followed by an aqueous work-up. During this reaction the hydride nucleophile reacts with the electrophilic carbon in the nitrile to form an imine anion. Once stabilized by a Lewis acid-base complexation, the imine salt can accept a second hydride to form a dianion. The dianion can then be converted to an amine by addition of water to neutralize the reaction environment. The general reaction is shown below.

The reduction of cyclopentanecarbonitrile is shown below as an example.

The mechanism begins with the nucleophilic hydride reacting with the electrophilc carbon of the nitrile to form an anionic aluminum complex. A second hydride nucleophile reacts with the same electrophilic carbon to form a tetrahedral complex. Protonation by addition of water produces the primary amine in its neutral form.

1) Nucleophilic reaction by the Hydride

2) Second nucleophilic reaction by the hydride.

3) Protonation by addition of water to give an amine

Grignard reagents can react with nitriles to form an imine salt that can be hydrolyzed to form a ketone as shown in the reaction below.

The reaction of benzonitrile with the methyl-Grignard reagent to form acetophenone is shown below as an example.

The mechanism begins with the nucleophilic Grignard Reagent reacting with the electrophilic carbon of the nitrile to form an imine salt. The imine salt is hydrolyzed to produce a ketone through a series of nucleophilic and proton transfer reactions. The complete mechanism is shown below for those who are curious.

1) Nucleophilic reaction by the Grignard Reagent