Cyanohydrins have the structural formula of R2C(OH)CN. The “R” on the formula represents an alkyl, aryl, or hydrogen. To form a cyanohydrin, a hydrogen cyanide adds reversibly to the carbonyl group of an organic compound thus forming a hydroxyalkanenitrile adducts (commonly known and called as cyanohydrins).

The reaction of aldehydes and ketones with hydrogen cyanide

Hydrogen cyanide adds across the carbon-oxygen double bond in aldehydes and ketones to produce compounds known as hydroxynitriles. For example, with ethanal (an aldehyde) you get 2-hydroxypropanenitrile:

The reaction isn't normally done using hydrogen cyanide itself, because this is an extremely poisonous gas. Instead, the aldehyde or ketone is mixed with a solution of sodium or potassium cyanide in water to which a little sulphuric acid has been added. The pH of the solution is adjusted to about 4 - 5, because this gives the fastest reaction. The solution will contain hydrogen cyanide (from the reaction between the sodium or potassium cyanide and the sulphuric acid), but still contains some free cyanide ions. This is important for the mechanism.

Acetone cyanohydrins (ACH) have the structural formula of (CH3)2C(OH)CN. It is an organic compound serves in the production of methyl methacrylate (also known as acrylic).

It is classified as an extremely hazardous substance, since it rapidly decomposes when it's in contact with water. In ACH, sulfuric acid is treated to give the sulfate ester of the methacrylamid. Preparations of other cyanohydrins are also used from ACH: for HACN to Michael acceptors and for the formylation of arenas. The treatment with lithium hydride affords anhydrous lithium cyanide.

The reactivity of acetylide ions with aldehydes and ketones follows the mechanism for cyanide. For example, 2-butanone reacts with acetylide as shown in the reaction below.

8. Mandelonitrile occurs in pits of some fruits. Glycolonitrile is the simplest cyanohydrin. Their structures are shown below.

Propose the reactants for mandelonitrile and glycolonitrile. 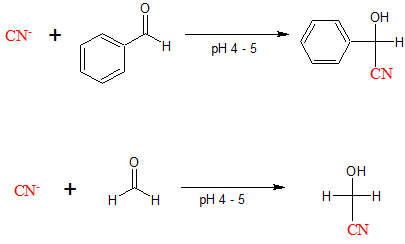