Both alkyl group side chain reactions require at least one hydrogen atom bonded to the benzyl carbon. For the oxidation reaction, the number of carbon atoms on the side chain does not matter. The alkyl group is oxidized to a carboxylic acid as long as the benzyl carbon is bonded to one hydrogen atom. The bromination reaction is the N-bromosuccinamide (NBS) radical, substitution reaction previously studied. As with the oxidation reaction, one benzylic hydrogen is needed so that it can be substituted with bromine. Examples of both reactions are shown below.

Bromination of the Benzylic Carbon

The benzylic C-H bonds weaker than most sp3 hybridized C-H. This is because the radical formed from homolysis is resonance stabilized.

Resonance stabilization of the benzylic radical

Because of the weak C-H bonds, benzylic hydrogens can form benzylic halides under radical conditions.

NBS as a Bromine Source

Since there are several limitations to the Friedel-Crafts alkylation that are not observed with the Friedel-Crafts acylation, reduction of the acyl side chain to an alkyl side chain is a useful reaction for multiple step synthesis. The Wolff-Kishner reaction reduces the carbon groups (aldehydes and ketones) to alkanes and is not limited to acyl groups bonded to benzene rings. This acyl reduction reaction is also useful because acyl groups are deactivating, meta-directors, and alkyl groups are activating, ortho-, para-directors which adds flexibility to multiple step synthesis strategies.

21. Draw the bond-line structures for the product(s) of the following reactions. 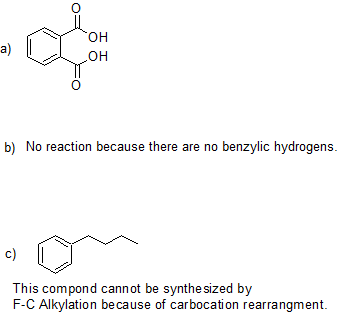