Electrophilic hydration of alkenes has practical applications in making alcohols for fuels and reagents for other reactions. The basic reaction under certain temperatures (given below) is the following:

In later sections, we will learn that mercury (II) sulfate and borane are also electrophiles that can react with alkenes to form hydration products. Each reaction pathway has its own regio- and stereochemical considerations. In the example below, we see that the same alkene produces different hydration products depending on the hydration pathway.

Mechanism for Acid-catalyzed Hydration of Alkenes

In the mechanism for a 3º alcohol shown above, the red H is added to the least-substituted carbon connected to the nucleophilic double bonds (it has less carbons attached to it). This means that the carbocation forms on the 3º carbon, causing it to be highly stabilized by hyperconjugation—electrons in nearby sigma (single) bonds help fill the empty p-orbital of the carbocation, which lessens the positive charge. More substitution on a carbon means more sigma bonds are available to "help out" (by using overlap) with the positive charge, which creates greater carbocation stability. In other words, carbocations form on the most substituted carbon connected to the double bond. Carbocations are also stabilized by resonance, but resonance is not a large factor in this case because any carbon-carbon double bonds are used to initiate the reaction, and other double bonded molecules can cause a completely different reaction. If the carbocation does originally form on the less substituted part of the alkene, carbocation rearrangements occur to form more substituted products. There is no stereochemical control in acid-catalyzed hydration reactions. The carbocation intermediate has the trigonal planar geometry of sp2 hybridization which allows the subsequent reaction with water from either orientation. 1. Draw the bond-line structure for the major product of each reaction. 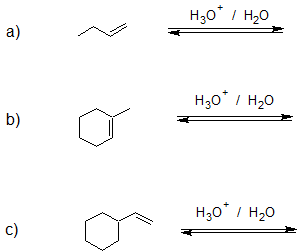