Amine bases are classified according to the number of alkyl or aryl groups attached to nitrogen. Amines are classified differently from alkyl halides and alcohols because nitrogen has a neutral bonding pattern of three bonds with a single lone pair. To classify amines, we look at the nitrogen atom of the amine and count the number of alkyl groups bonded to it. This number is the classification of the amine.

The nomenclature of amines is further complicated by the fact that several different nomenclature systems exist, and there is no clear preference for one over the others. The four compounds shown in the top row of the following diagram are all C4H11N isomers. The first two are classified as 1º-amines, since only one alkyl group is bonded to the nitrogen; however, the alkyl group is primary in the first example and tertiary in the second. The third and fourth compounds in the row are 2º and 3º-amines respectively. The bottom row shows the structures for some common amines that need to be memorized.

To be consistent and logical in naming amines as substituted ammonias, they strictly should be called alkanamines and arenamines, according to the nature of the hydrocarbon grouping. Unfortunately, the term alkylamine is used very commonly in place of alkanamine, while a host of trivial names are used for arenamines. We shall try to indicate both the trivial and the systematic names where possible. Some typical amines, their names, and their physical properties are listed in he Table below. The completely systematic names give in the Table illustrate the difficulty one gets into by using completely systematic names, and why simpler but less systematic names continue to be used for common compounds. A good example is \(\ce{N}\),\(\ce{N}\)-dibutylbutamine versus tributylamine. The special ways of naming heterocyclic amines can be referenced in the appendix of this chapter.

Common Amines and Their Properties 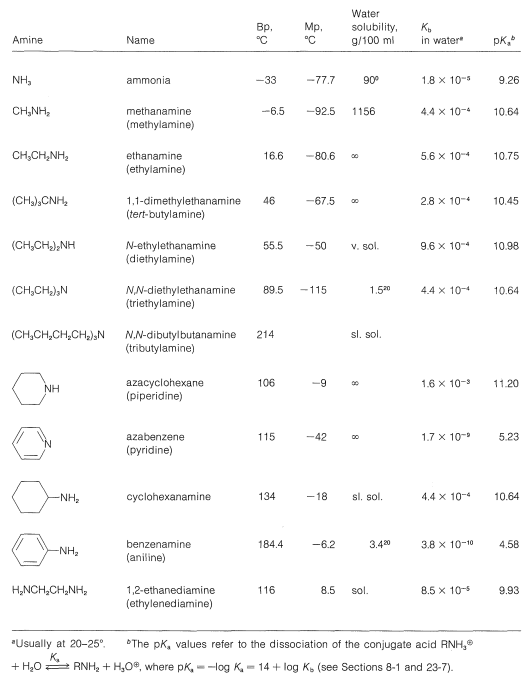 Many biologically important compounds are amines. Alkaloids are amines synthesized by plants to protect them from being eaten. Humans primarily use alkaloids medicinally as pain killers. All alkaloids are toxic and addictive. The Greeks killed Socrates with (S)-coniine. Mild cases of alkaloid poisoning produce psychological effects resembling peacefulness, euphoria or hallucinations.

A nitrogen bonded to four alkyl groups will necessarily be positively charged, and is called a 4º-ammonium cation. For example, (CH3)4N(+) Br(–) is tetramethylammonium bromide. Salts of amines with inorganic or organic acids are named as substituted ammonium salts, except when the nitrogen is part of a ring system. Examples are

\(^1\)Note the use of azonia to denote the cationic nitrogen in the ring, whereas aza is used for neutral nitrogen.

Perhaps the most noteworthy aspect of ammonium salts is that they have low odor and are water soluble. These qualities are explored more fully in the amine chapter

Heterocyclic amines are amines in which the nitrogen is part of a ring that contains at least one double bond. Many aromatic and heterocyclic amines are known by unique common names, the origins of which are often unknown to the chemists that use them frequently. Since these names are not based on a rational system, it is necessary to memorize them. There is a systematic nomenclature of heterocyclic compounds, but it will not be discussed here. For further details, refer to the appendix of this chapter for the full IUPAC rules of organic compound nomenclature.

1. Draw the bond-line structure for each compound and write the condensed structural formula for parts (a) & (d) - (g).