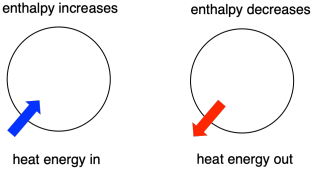 Observations of natural processes led a surprising number of chemists of the late 19th century (including Berthelot and Thomsen) to conclude that all spontaneous reactions must be exothermic since:

If this were true all we would need to predict whether a reaction is spontaneous is the change of enthalpy. If \(ΔH\) were negative, the process should be able to occur by itself. If ΔH were positive, the reaction could not occur by itself.

Indeed, almost all exothermic reactions are spontaneous at standard thermodynamic conditions (1 atmosphere pressure) and \(25^oC\). However a number of common processes which are both endothermic and spontaneous are known. The most obvious are simple phase changes, like ice melting at room temperature. Also, many solids dissolve in water and simultaneously absorb heat.

So the energy is now dispersed among the molecules of liquid water which have access to all kinds of molecular motion states that were not available in the solid. At the same time, the ordered structure of the solid ice has given way to a much less organized flowing liquid:

But the actual change has occurred in the energy dispersal. This subtle property that matter possesses in terms of the way energy is dispersed in it is known as entropy. Entropy is sometimes erroneously referred to as "randomness" or even "disorder" but these descriptions do not fit the state of energy as well as they seem to describe some of the often obvious results.

Just as reactions which form stronger bonds tend to occur spontaneously, energy is constantly being dispersed or "spread out" in any process which either happens on its own or which we make happen.

It is the Second Law of Thermodynamics which gives us the criterion we are seeking to decide whether a reaction will be spontaneous or not (well, almost...):

In a spontaneous process the entropy of the universe increases.

The "universe" is a pretty big place. Recall the definitions we used when we introduced chemical thermodynamics. The system is that part of the universe on which we focus our attention--generally chemicals. The surroundings are everything else. Taken together they constitute the universe.

So the Second Law could be written this way for a spontaneous process:

3. Entropy increases when solids or liquids dissolve in water

4. Entropy decreases when a gas is dissolved in water

5. Entropy is lower in hard, brittle substances than in malleable solids like metals

Of course, the main issue here is how entropy changes during a process. This can be determined by calculation from standard entropy values (\(S^o\)) in the same way that enthalpy changes are calculated: