Hydrogen-atom abstraction is an elementary reaction that permeates the free-radical chemistry of carbohydrates. Because it is the final propagation step in many chain reactions, hydrogen-atom abstrac­tion often converts a carbon-centered radical into a stable product. The hydrogen-atom donor in such reac­tions usually is a tin or silicon hydride, but sometimes a thiol or selenol serves in this role (eq 5). The final step in the simple reduction shown in eq 6 is a typical, hydrogen-atom-abstrac­tion reac­tion.3 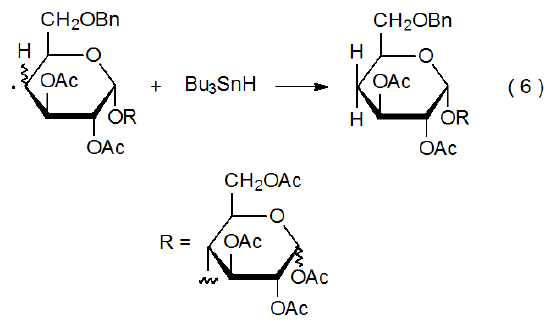 Carbohydrates also can serve as hydrogen atom donors (eq 7). A radical centered on a bro­mine, chlorine, or oxygen atom (and, sometimes, on a sul­fur or carbon atom) is able to abstract a hydrogen atom from a carbo­hy­drate in an elementary reaction that can be highly regio­se­lective. For inter­mo­lec­ular reactions this selectivity is due to radicals prefer­entially abstracting the hydro­gen atoms that produce the most stable carbon-centered radicals. In the reaction shown in eq 8, for example, the bromine atom abstracts only the hydrogen atom that produces the highly resonance-stabilized radical 1.4

If a radical is centered on an oxygen or carbon atom in a carbohydrate, internal abstraction becomes a possibility. Such abstraction is regioselective not only because a more stable radical is being produced but also because the radical center is able easily to come within bonding distance of a limited number of hydro­gen atoms (sometimes only one). In the reaction shown in eq 9, the only hydrogen atom abstracted is the one that is 1,6-related to the radical center.5 Although an oxygen-centered radical (e.g., 2 in eq 9) is reac­tive enough to abstract a hydrogen atom from any carbon-hydrogen bond in a carbohydrate,6 only the most reactive carbon-centered radicals (e.g., primary and vinylic ones) are capable of such reac­tion (eq 10).7