Atom transfer radical polymerization (ATRP) is another common method of carrying out living polymerization. This method, like RAFT and other methods, sets up an equilibrium between a dormant phase of polymer chains and a growing phase. In the dormant phase, radicals have been trapped and are protected from termination, but are also unable to participate in polymerization. In the growing phase, radical chains have been released and can continue to grow by adding monomers in a radical mechanism. The idea is to release just a few radical chains at a time, recapturing them before they have a chance to undergo chain termination events.

ATRP is initiated in a very different way from other radical polymerizations. It does not depend on a typical initiator such as AIBN or benzoyl peroxide. Instead, the initiator is an alkyl halide. On its own, the alkyl halide seems more suited for polar reactions such as nucleophilic substitutions than radical reactions. The second component of the chain control agent, usually a copper(I) halide, is required in order to activate the initiator, turning it into a radical. Polymerization ensues.

In the initiation step, a halogen atom is transferred from the alkyl halide to the copper(I) ion, leaving behind a radical. In formal terms, the copper has become copper(II), so mechanistically this step appears to involve an electron transfer.

There is always an additional component to the chain control system. The copper salts themselves are pretty insoluble. A chelating ligand is added to bind the copper ion and help get it into solution, where it can much more readily participate in the polymerization reaction. A few examples of these ligands are shown below. 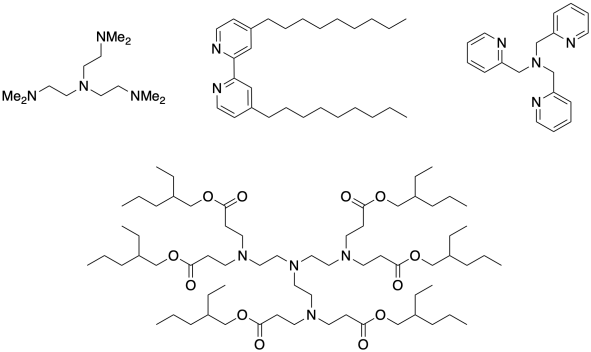 Show CuBr binding with each of the ligands shown above.

Show a mechanism of initiator activation via

Once the initiator has been activated, it can add to the first styrene molecule. The radical continues to propagate, building up a long polymer chain. In the final polymer, both end groups come from the initiator.

One problem that can arise in living polymerizations is that at some point a termination may still occur. Of course, that results in a dead chain that will no longer grow. An additional consequence is that the chain can no longer go back into the dormant phase, and if the chain cannot go back, then neither can the copper(II).

Thus there is a buildup of copper(II) in the system.

There are a couple of clever solutions to this problem. Perhaps the simplest method uses copper metal to reduce the copper(II) to copper(I). This method has been coined "supplemental activation reducing agent" or SARA.

In addition to SARA, there are other methods of converting deactivated copper back into its active form in order to shift chains back into the growing phase. Initiators for continuous activator regeneration (ICAR) uses organic reducing agents to convert CuII back into CuI. Provide a mechanism for this reaction using phenylhydrazine (PhNHNH2) as the reducing agent.

Activators regenerated by electron transfer (ARGET) is a similar method to SARA and ICAR, but relies on the addition of the thermal initiator, AIBN, to the polymerization.

a) Provide a mechanism for how AIBN regenerates CuI ion.

b) Explain the disadvantageous side reaction that can result under these conditions.