The termination of radical polymerizations can lead to broadening molecular weight distributions and divergent morphology, with branched structures eventually adding in to the mixture of linear chains that were already growing. There are several methods commonly used to prevent these random terminations. All of them work by keeping the concentration of growing chains low. That strategy limits the chance that radical chain ends encounter other chains and undergo termination reactions.

There is a trade-off. Limiting the concentration of growing chains results in slower polymer growth. At the same time, it results in dramatically slower rates of chain termination.

Reversible addition-fragmentation chain transfer (RAFT) polymerization is a common strategy used to limit the concentration of polymer chains at any given time, while ensuring a steady supply of these growing chains in the long run. The strategy has been described as putting growing chains in suspended animation, waking them up periodically to continue polymerization. The key component of this strategy is the chain transfer agent, sometimes called a chain control agent. Usually, these chain transfer agents are thiocarbonylthio compounds like the one shown below.

Note that the conditions are otherwise very similar to a regular radical polymerization. The process starts with initiation of radicals, in this case through decomposition of the AIBN.

The isobutyronitrile radical then propagates the radical to the first styrene molecule. So far, nothing different has happened compared to a regular radical polymerization. The resulting benzylic radical propagates with additional styrene monomers, one at a time, enchaining them into the polymer.

After a few of those propagation events, the growing chain encounters a molecule of the chain transfer agent. Insetad of adding to the pi bond of the styrene, the radical adds to the pi bond of the thiocarbonyl. The new radical is centered on the carbon between the sulfur atoms. If you have encountered sulfur and phosphorus chemistry before, you will know that these large main group atoms have a knack for stabilizing species next to them that would otherwise be very reactive. That's true with radicals, too. The result is that the radical has found a stable resting state. While it sits there, no polymerization can occur, but no terminations will happen, either.

The structure of these particular chain transfer agents leads to a second possible equilibrium. Rather than releasing the original growing chain from the dormant phase, a radical could be released by cleaving the other sulfur-carbon bond, forming a new thiocarbonyl. The radical that is released is then free to propagate, forming a new polymer chain.

As a result, we can think of this chain control agent as participating in multiple equilibria, with two chains that can each be either dormant or growing. The quilibrium constants are typically chosen so that the chains spend more of their time in a dromant state, but at any given time one of them may be released and start growing again.

Effective chain control by RAFT requires selective matching between monomer and chain control agent so that there is an appreciable equilibrium between growing phase and dormant phase. Explain the choice of reagents here. 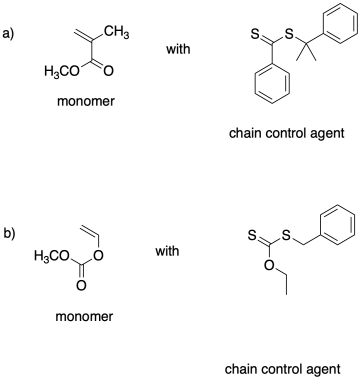