Radical polymerization is a very common approach to making polymers. There are a number of very reliable methods of carrying out radical polymerization, leading to high molecular weight materials. A typical example is the formation of polystyrene under the influence of the radical initiator, azoisobutyronitrile (AIBN).

Other initiators can also be used in radical polymerizations. Benzoyl peroxide (BPO) is one common example. In this case, the initiation reaction is sparked by the weak O-O single bond. The benzoate radical that forms from that homolysis further decomposes via decarboxylation, rapidly giving rise to a phenyl radical.

Phenyl radicals and isobutyronitrile radicals are both able to initiate the polymerization of styrene. Not just any radical will peform that task. Simple peroxides are not very good at initiating radical polymerization, despite the fact that they also contain O-O bonds that are readily cleaved.

Oxygen-centered radicals do not typically add to double bonds. It's much more common to see them abstract hydrogen atoms. Accordingly, tert-butyl peroxides and other such peroxides would not be used to initiate the polymerization of styrene.

The radical formed via initiation induces cleavage of the pi bond in styrene, resulting in a benzylic radical. This is an example of a propagation step, because old radicals have disappeared and new radicals have appeared.

Note that this step takes place with regioselectivity. There are two possible radicals that could result, but only one actually forms. That's the more stable one. It is stabilized by delocalization because of the benzene ring.

Eventually, radical reactions undergo termination, in which two radicals combine in some way so that neither one is a radical anymore. The most obvious way for that to happen is if two growing chains meet head-to-head, with two benzylic radicals connecting to make a bond.

Other termination events are also prevalent in radical polymerizations. Hydrogen atom abstraction is pretty common, with one growing radical stealing a hydrogen atom alpha to the radilca at the head of another chain. The reason that may happen is that it results in the formation of two new bonds: a C-H bond and a C-C pi bond. In that case, both chains stop growing. The one that contains the new pi bond could eventually be re-initiated, of course, but in the meantime it will lag behind most of the other chains that will continue to grow without it. That lag will lead to a broadening molecular weight disctribution. 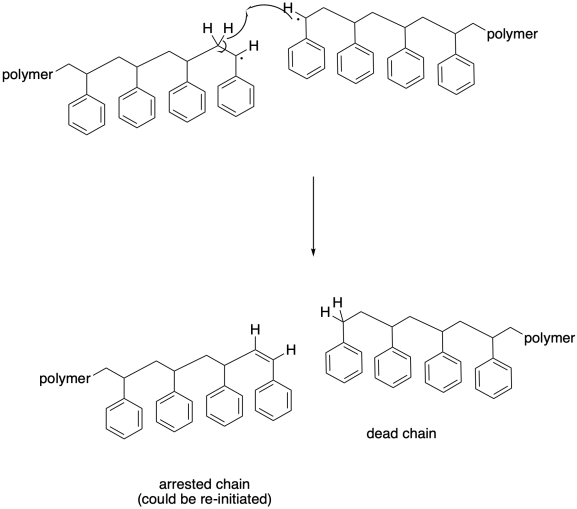 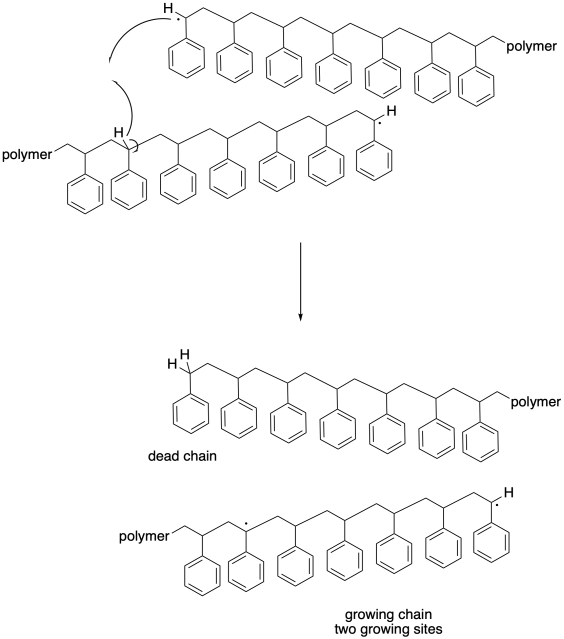 In this case, one chain becomes dead; it stops growing altogether, just like one of the chains in the previous case. However, the other chain continues to grow. In fact, with two radical sites, it will begin to grow twice as quickly as the rest of thegrowing chains. Once again, this development leads to a dramatic broadening of the molecular weight distribution. What's more, this "back-biting" event leads to a change in morphology of the growing chain. Because it is now growing from two different sites, this chain becomes branched, unlike all of the other chains that are growing in a linear fashion. Not only do we now have chains of vastly different lengths, but we also have chains of vastly different shapes, and their properties are becoming less well-defined. 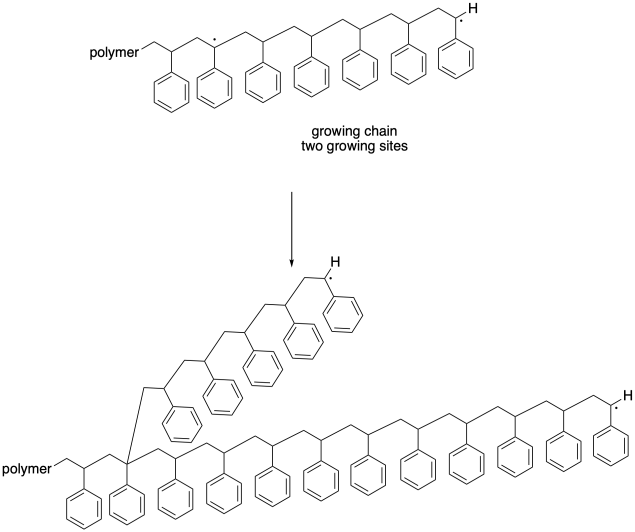 These termination steps are important because they result in the death of growing chains and therefore have an impact on the polymers that result. In later sections, we will see some strategies that limit these termination steps, leading to more uniform molecular weight distribution and more reliable polymer properties.

So far, we have focused on polystyrene as an example of radical polymerization, because of the obvious stability of the benzylic radical. Other monomers can also be polymerized under similar conditions. Like styrene, they may give rise to resonance-delocalized radicals. In other cases, the radical stability may be less obvious, such as in the case of vinyl chloride. Vinyl chloride (CH2=CHCl) is a pretty candidate for radical polymerization because radicals are stabilized by adjacent halogen atoms.

That may come as a surprise. This stability results from a hyperconjugation effect, in which overlap between the radical electron and a nonbonding pair on the halogen results in a net stabilization. This idea is similar to the one behind the stability of highly substituted radicals, such as radicals on tertiary carbons. 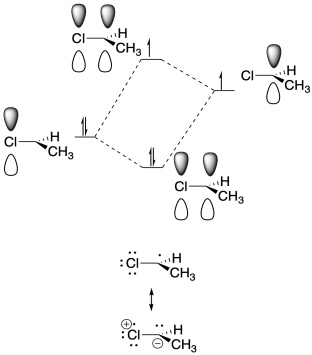 Show the polymers that would result from radical polymerization of the following monomers.

Show why radicals formed from the following monomers are relatively stable:

Apart from resonance delocalization, degree of substitution is also a modest stabilizing factor for radicals. Indicate the order of stability of the following radicals: