Alkenes are a common polymer feedstock, used to make a range of very familiar plastics in everyday use. Because their properties depend strongly on their molecular weights and molecular weight distributions, it is very important to be able to control the growth of these long-chain polymers from their alkene monomers. Termination events, such as combination of the cation with a nucleophile, elimination, or chain transfer, all contribute to a widening disperity between chains that have undergone these events and those that continue to grow. 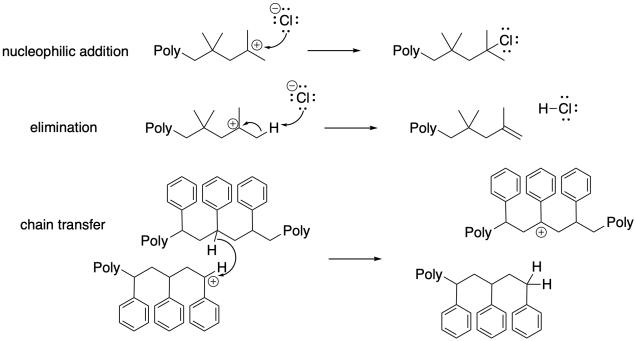 In any polymerization, as in any other reaction, we are dealing with thousands of reactions involving thousands of different molecules all happening at the same time. Several reactive chains growing in tandem would be expected to grow at similar rates, and ultimately they would reach similar degrees of polymerization. That means they would all have the same number of monomers incorporated into the final polymer chain and so they would all have similar molecular weight.

What happens when one of these growing chains undergoes some kind of termination event? Chain death, as this problem is commonly called, has a couple of direct consequences. Obviously, the chain that stopped growing does not keep up with the others, so its molecular weight is lower than the rest. That fact alone might lead us to believe the average molecular weight would be lower than we had expected in this polymerization. If we added more and more polymer to the polymerization over time, we wouldn't expect the molecular weight to keep increasing, because the reactive sites keep getting quenched. 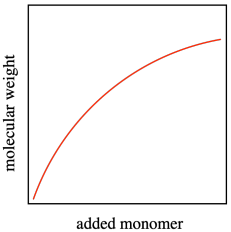 More subtly, that growing chain had been slated to enchain a certain number of monomers, some of which are still left in the system when it dies. What happens to them? Of course, the other growing chains will each get some extra monomers. That means the dispersity problem gets even worse; one chain stops growing and is shorter than anticipated, but others gobble up the extra monomers and become longer than anticipated. Dispersity, the distribution of molecular weights, gets wider.

The problem can be even worse when a termination occurs through elimination, resulting in the formation of a new alkene. Because that new alkene is already found at the end of a polymer chain, when it combines with a cationic chain end the polymer molecular weight effectively doubles.

In other words, although we would reasonably expect molecular weight to stop increasing as chains die, resulting in lower molecular weight than expected, the opposite can also happen. We can observe an increase in molecular weight, because the chains that are left are consuming all of the monomer, becoming much bigger, and occasionally two chains are combining to dramatically increase molecular weight. Molecular weight increase is proceeding in an uncontrolled and somewhat unpredictable way. 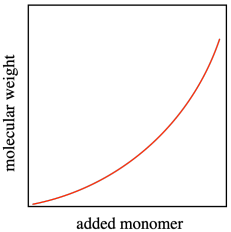 Furthermore, the reaction of a cationic growing chain with a macroalkene results in a sudden shift in polymer morphology. Instead of a straight chain, we now have a dramatically branched polymer. That change in morphology has a severe impact of polymer properties.

All of these factors mean that the distribution of molecular weights gets broader when chain reactions undergo unexpected termination. The term for the width of molecular weight distribution is dispersity (D), sometimes called polydispersity index (PDI). In the graph below, the red line describes a sample from a polymerization that was not as well controlled as the one described by the blue line. There are a lot more polymer chains that are both longer and shorter than the average. 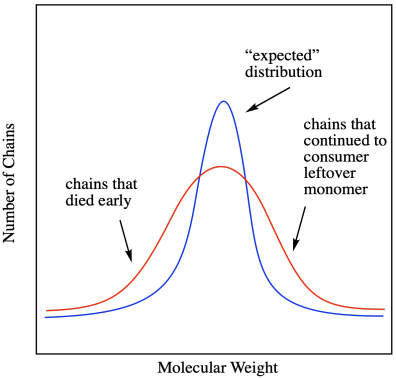 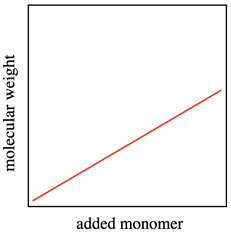 A second feature of living polymerization is that dispersity (or PDI) stays relatively constant throughout the course of a reaction. Because there are no chain terminations, the reactive chains all continue to grow at the same pace, and the polymers that result are of uniform molecular weight.

In order to achieve a living cationic polymerization, we would have to prevent unwanted terminations steps. There are a variety of systems that accomplish this goal, but they share some common features. Essentially, these methods intentionally allow a nucleophile to combine with the cationic chain end, but use a Lewis acid to reactivate the resulting compound and regenerate the growing chain end.

Like other cationic polymerizations, these processes could be initiated by addition of a protic acid to an alkene to generate a cation. That initial cation would then begin reacting with the nucleophilic alkenes around it, generating subsequent cations that sustain a chain reaction. In practice, it's instead very common to add an ionizable compound, such as a tertiary alkyl halide, along with a Lewis acid co-initiator. The Lewis acid promotes ionization of the initiator, forming a cation.

Once that cation has formed, regardless of how it got there, it can begin to react with the monomers around it. The chain reaction will continue, consuming more and more monomers, resulting in a longer growing chain with higher molecular weight.

Lewis acid-base adducts always form reversibly, however. At some point, the adduct can give back to the cationic chain end the same anionic group that it once extracted from the initiator. The chain stops growing, because it no longer contains a reactive site. However, just as the Lewis acid once extracted an anionic group from the initiator, it can extract it from this polymer chain. When it does, the cationic chain end will start reacting with more monomers, and the chain will grow again.

Living cationic polymerization depends on an equilibrium between a reactive, growing phase and an unreactive, dormant phase. There is an inherent trade-off here. The concentration of reactive cationic chain ends is lowered because a large fraction of the chains are always dormant. That low concentration of cations means there is less opportunity for chain termination events; that's helpful in keeping dispersity low. On the other hand, that low concentration of cations also means the polymer grows much more slowly than it would otherwise.

This trade-off works to our advantage because of kinetic conditions that hold true throughout most of the duration of the polymerization. Termination steps depend on the collision between two species that are both held at relatively low concentration, whether it is a cationic chain end and an anionic base or two different growing chains. Propagation depends on the concentration of reactive chain ends and the concentration of monomer. Although one of those concentrations is very low, the other one is very high all the way up until nearly the end of the polymerization. That means propagation remains fast relative to termination.

Choose the best Lewis acid from each of the following pairs.

Provide a mechanism for this polymerization. Show chain control using equilibriu between a growing phase and a dormant phase.

Living cationic polymerizations are sometimes promoted when a weakly basic molecule is added to the reaction mixture. Although different reasons have been proposed for the role of the Lewis base, it is well-established that adding a neutral Lewis base to a Lewis acid can result in a more active, cationic Lewis acid. Show how this stronger Lewis acid forms using triethylamine and gallium chloride.