There are alkenes that do not give rise to cations stable enough for cationic polymerization, and don't form stable enough anions for anionic polymerization, either. The two most prominent examples are ethene and propene. Nevertheless, ethene and propene are the most common feedstocks for polymers, with about 100 millions tons of global polyethylene production annually, and around 50 million of polypropylene. So, how do we make such huge quantities of polyethylene and polypropylene?

These monomers are instead polymerized via an organometallic cycle of alkene associations and 1,2-insertions, so that the last alkene becomes part of a metal alkyl group ready to undergo insertion with the next alkene that binds the metal. This process was developed in 1952 by Karl Ziegler at the Max Planck Institute for Coal Research in Mulheim, Germany. The method was later improved by Giulio Natta at Milan Polytechnic.

Commonly used industrial conditions for Ziegler-Natta polymerization employ a multi-component system. There is always an early transition metal catalyst, from the left-hand side of the d-block of the periodic table. Typically this catalyst is TiCl4 or TiCl3; under the reaction conditions, TiCl4 is probably reduced to TiCl3 anyway. This catalyst is supported on other metal halides such as MgCl2. In heterogeneous catalysis, a support is a layer which strongly interacts with the catalyst, tuning its properties; exactly how that works is somewhat complicated. The catalyst and support are deposited on a solid carrier, such as silica, SiO2, which distributes the catalyst, increasing the usable surface area. In addition, the carrier may modify the three-dimensional space around the catalyst, providing a binding pocket for the catalyst and the substrate, for example. Finally, the system needs an activator, which is a p-block metal alkyl such as triethylaluminum. This compound transfers a starting alkyl group to the catalyst and may also reduce the transition metal species.

A Ti(III) rather than Ti(IV) catalyst has the advantage of being better able to bind the alkene substrate. Ti(IV) is a d0 species, and d0 metals are typically incapable of binding alkenes. The relatively weak π-bond donation to a metal is normally augmented by back donation from an occupied metal d orbital into the alkene π* orbital.

Let's take a look at some alternative Ziegler-Natta reagents. Identify each component as a possible catalyst, support, carrier or activator.

As indicated previously, once an alkene binds at the transition metal, an initial alkyl that was previously transfered from the aluminum is able to participate in a 1,2-insertion reaction. As a result, the alkene is incorporated into the alkyl chain. Subsequent alkene association and 1,2-insertion steps serve to extend the chain, eventually into oligomers and then polymers.

Homogeneous catalysts have also been used commercially for these polymerizations. These systems have been developed more recently by Walter Kaminsky at University of Hamburg, Germany and Hans-Herbert Brintzinger at University of Konstanz, Germany. These soluble catalysts have expanded the scope of stereochemical control over the polymerization of propene and other terminal alkenes or 1-olefins.

Tacticity in polymers is frequently determined by NMR spectroscopy. Because diastereomers have different physical properties, they display slightly different shifts in the 1H or 13C NMR spectrum. In a polymer chain, we think about chiral centers in pairs, which we call "diads", because every pair of chiral centers has two possible diastereochemical relationships and therefore two possible chemical shifts. If the methyl groups are on the same side, the chiral centers have a "meso" relationship, whereas if they are on opposite sides, they have a "racemo" relationship.

In principle, these are two different stereochemical relationships that could give rise to two different NMR signals. If the polymer is truly isotactic, we might only see the signal that comes from the meso diad, because all of the stereocenters would have that same relationship along the chain. If the polymer is truly syndiotactic, we might see only the signal from the racemo diad, at a slightly different chemcial shift as the meso. On the other hand, we might see two signals, and the relative integration of the two signals might indicate that the polymer is mostly syndiotactic, mostly isotactic, or completely atactic.

Given a big enough magnetic field strength an an NMR spectrometer, we may even be able to detect the difference between diads and tetrads, allowing us to see more detail along different segments of the polymer backbone.

Label the following triads and tetrads.

Control over polymer stereochemistry typically occurs in one of two ways. The first way is called chain end control. Given an existing stereocenter at the end of the chain, the approach of the next monomer will be influenced by how that existing chiral center projects in space. As a result, the last chiral center influences how the next one is formed. Conceptually, this idea is the same as saying that in a simple organic reaction, an existing chiral center may force an incoming group to one face of a molecule rather than another, leading to preferential formation of a particular stereochemistry where the new bond is made. In the case of polymers, it means the very first insertion reaction, when the first chiral center forms, determines all of the subsequent stereochemistries along the chain. Of course, there isn't a simple way to predict what that stereochemistry will be: syndiotactic or isotactic. However, the drawing below shows how such an interaction could lead to a syndiotactic polymer.

The second mechanism is called site control. In site control, the specific shape of the reagent or catalyst that facilitates the reaction also determines the stereochemictry. This idea is also seen in organic reactions. Chiral reagents or catalysts, whether for hydrogenations, hydroborations, or other reactions, will fit with the substrate in one way more easily than another, leading to preferential formation of one stereochemistry and not the other.

Site control is a topic of interest in homegeneous catalysis, so let's look at how it would work in a titanocene. The first basic lesson in titanocene chemistry is that the two cyclopentadienyls form an angle with each other, so that the molecule takes on a little bit of a wedge shape. One end of the titanocenes are closed together more, and the other end is more open. It's kind of like a clam shell.

If another molecule, such as a propene, approaches to bind to the titanium, it will have to negotiate the wedge shape to minimize steric interactions. For example, keeping the methyl group away from the titanium, toward the opening on the wedge, would cause less crowding than if the methyl spun around to project deeper inside the wedge.

When discussing the formation of a new chiral center, the key idea is whether a new group will bind to one face of a molecule or the other face. We are going to show one face of the propene in blue and the other in red to emphasize this difference. So far, the methyl of the propene will remain further away from the titanium, but there is nothing to prevent the propene from flipping over; the methyl group could be either up or down in the picture.

Much of the focus in these homogeneous catalysts has been on developing some kind of asymmetry in the catalyst. The catalyst shown below has Cs symmetry. The top is now different from the bottom. Specifically, the bottom is much more crowed, so that it is no longer very likely that the propene would approach with its methyl group down. It would be much easier to come in with its methyl group pointed up in this picture.

To add one more wrinkle, the propene isn't going to bind in the middle of the wedge, but will be off to one side or the other. That's because there should already be an alkyl group on the metal, which we have shown in this case as a simple methyl group. The propene could approach from the near side, in front of the methyl (shown on the left), or from the far side, behind the methyl (shown on the right).

Which one really happens? Both. During the insertion, the alkyl chain shifts over to the coordinated olefin, opening up a coordination site. Notice in the top picture above, the propene is on a wedge and the alkyl is on a dash. After the insertion, the alkyl chain is on a wedge and a new coordination site opens up behind it. A new propene moves into that site. As a result, the new propene approaches first from one side, then the other, alternative every time. This windshield washer mechanism results in a syndiotactive stereochemistry.

What is we change the shape of the catalyst? In the picture below, we have a catalyst with C2 symmetry. With this symmetry, the propene can approach with its methyl up only if it comes from the front. With its methyl down, it can only approach from the rear. 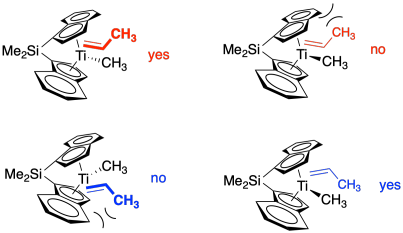