Enolate ions, as well as enols and enamines (section 7.6) are the key reactive intermediates in many biochemical isomerization reactions. Isomerizations can involve either the interconversion of constitutional isomers, in which bond connectivity is altered, or of stereoisomers, where the stereochemical configuration is changed. Enzymes that interconvert constitutional isomers are usually called isomerases, while those that interconvert the configuration of a chiral carbon are usually referred to as racemases or epimerases.

One very important family of isomerase enzymes catalyzes the shifting of a carbonyl group in sugar molecules, often converting between a ketose and an aldose (recall that the terms ketose and aldolse refer to sugar molecules containing ketone and aldehyde groups, respectively).

The ketose species is first converted to its enol tautomer in step 1 (actually, this particular intermediate is known as an 'ene-diol' rather than an enol, because there are hydroxyl groups on both sides of the carbon-carbon double bond). Step 2 leads to the aldose, and is simply another tautomerization step. However, because there is a hydroxyl group on the adjacent (blue) carbon, a carbonyl can form there as well as at the red carbon.

Notice that DHAP is achiral while GAP is chiral, and that a new chiral center is introduced at the middle (red) carbon of GAP. As you should expect, the enzyme is stereoselective: in step 2 a proton is delivered to the red carbon, from behind the plane of the page, to yield the R enantiomer.

Also in the glycolysis pathway, glucose-6-phosphate (an aldose) and fructose-6-phosphate (a ketose) are interconverted through an ene-diol intermediate (EC 5.3.1.9) by an enzyme that is closely related to triose-phosphate isomerase.

Enolates are a common intermediate in reactions where the stereochemical configuration of a chiral \(\alpha\)-carbon is interconverted. These are commonly referred to as racemization or epimerization reactions, depending on whether the interconverted isomers are enantiomers or epimers (recall that the term 'epimer' refers to a pair of diastereomers that differ by a single chiral center).

These reactions proceed though a deprotonation-reprotonation mechanism, illustrated above. In step 1, the chiral a-carbon is deprotonated, leading to a planar, achiral enolate. In step 2, a proton is delivered back to the a-carbon, but from the opposite side from which the proton was taken in step 1, resulting in the opposite stereochemistry at this carbon. Two acid-base groups, positioned at opposing sides of the enzyme's active site, work in tandem to accomplish this feat.

The proteins and peptides in all known living things are constructed almost exclusively of L-amino acids, but in rare cases scientists have identified peptides which incorporate D-amino acids, which have the opposite stereochemistry at the a-carbon. Amino acid racemase enzymes catalyze the interconversion of L and D amino acids. As you may recall from the introductory section to this chapter, the venom of the male platypus contains a neurotoxic peptide in which an L-leucine amino acid has been converted by a racemase enzyme to D-leucine. In another example, the cell walls of bacteria are constructed in part of peptides containing D-glutamate, converted from L-glutamate by the enzyme glutamate racemase. (EC 5.1.1.3) (Biochemistry 2001, 40, 6199).

A reaction (EC 5.1.3.1) in sugar metabolism involves the interconversion of the epimers ribulose-5-phosphate and xylulose-5-phosphate. The enzyme that catalyzes this reaction is called an 'epimerase'. (J. Mol. Biol. 2003, 326, 127).

Draw a reasonable mechanism for the ribulose-5-phosphate epimerization reaction above. Your mechanism should show an enolate intermediate and specify stereochemistry throughout.

Predict the products of epimerization reactions starting with each of the substrates shown.

Carbons next to imine groups can also be considered \(\alpha\)-carbons!

Recall from chapter 3 that a major issue with the drug thalidomide is the fact that the R enantiomer, which is an effective sedative, rapidly isomerizes in the body to the terotogenic (mutation-causing) S enantiomer. Note that the chiral center in thalidomide is an \(\alpha\)-carbon! 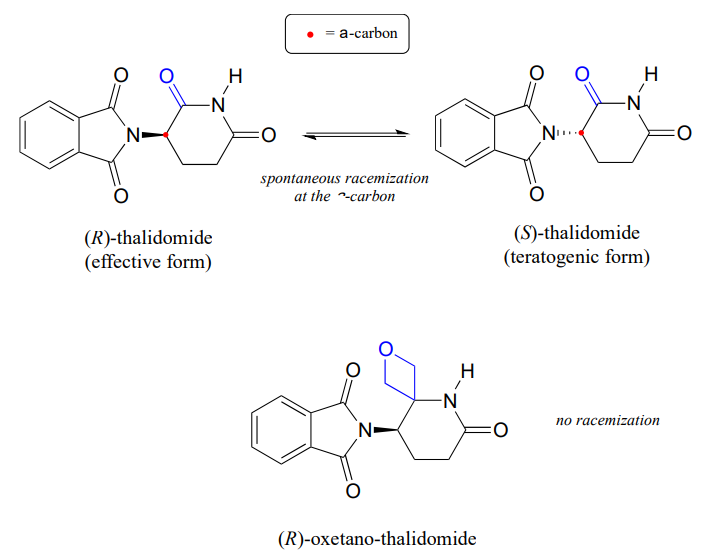 Recently chemists reported the synthesis of a thalidomide derivative in which the carbonyl group is replaced by an 'oxetane' ring, with the aim of making an isotopically stable form of the drug (because the carbonyl group has been removed, racemization is no longer possible - there is no a-carbon!) (Org. Lett. 2013, 15, 4312.)

The position of an alkene group can also be changed through a reaction in which the first step is abstraction of an \(\alpha\)-proton and formation of an enolate intermediate. degradation pathway for unsaturated fatty acids (fatty acids whose hydrocarbon chains contain one or more double bonds) involves the 'shuffling' of the position of a carbon-carbon double bond, from a cis bond between carbon #3 and carbon #4 to a trans bond between carbon #2 and carbon #3. This is accomplished by the enzyme enoyl \(CoA\) isomerase (EC 5.3.3.8). (J. Biol Chem 2001, 276, 13622).

Consider the structures of the substrate and product of the isomerization reaction above. What two factors contribute to the thermodynamic 'driving force' for the transformation?

The reaction below is part of the biosynthetic pathway for menthol. Suggest a mechanism that includes an enolate intermediate.