During the past two centuries, the art organic synthesis has seen enormous progress in several disciplines of organic chemistry. Soon after the strides made by stalwarts like Kekule, Fischer and Robison during late 19th century and early 20th century, chemistry witnessed the dawn of mechanistic organic chemistry. The era of spectroscopy and reagents soon followed to compliment and advance mechanistic organic chemistry and synthesis to new heights. During the middle of twentieth century, advances in Separation Science took over the classical art of purification. The last three decades of the century saw the birth of Logic in Synthesis. All these developments augured well for new developments in drug discovery leading to large-scale synthesis of several complex organic molecules. However, this hectic pace of developments in industrial chemistry has taken place at the cost of environment that is so vital for survival of life on earth. In chemical industry, this realization came about only after disasters like the one witnessed at Bhopal, India jolted the chemical world. The onus of development of new molecules rests on us (chemists) and therefore the onus of responsible development is once again on our shoulders. Clean Chemistry (meaning Green Chemistry) depends on several factors – clean starting materials, clean reagents, clean solvents, clean product, clean energy and (not the least) clean processes. While all these subtitles are discussed under Green Chemistry, we would restrict our present discussions to one aspect of the Green Process viz., protection free syntheses because this falls under our present discussions ‘Logic of Synthesis’.

The Logic of Synthesis opens up a systematic methodology for the development of Synthetic Trees. When properly devised, a synthetic tree contains all plausible routes for the synthesis of the Target compound. The route chosen depends on the need and constraints of the developer scientist. Hence, the choice of clean chemistry starts here. The routes should be analyzed from the windows for Green Chemistry. One such green window is the lookout for a Protection Free synthetic route. Why Protection Free Route? An industrially feasible route has to be very efficient to be economical. By imposing such a condition - Protection Free - to the choice of routes, it should possible to arrive at such routes. Each protection / deprotection sequence adds two steps to the scheme. Thus, more the protecting groups, less is the overall yield. In addition, each protection / deprotection step adds to the byproduct load released into the environment. Thus, protection based planning has a double-edged sword hidden at every such step. To minimize loss (of precious final product) protection / deprotection sequence should therefore be treated as an avoidable technique to be used only sparingly. Always remember that protection methodology provides such a sense of security, one tends to abuse and over use such a facility. Once a chemist settles in such a comfort zone, one tends to spend less time / effort to look for alternate approaches.

Is it possible to avoid it? It should be possible to deliberately select such routes from the Synthetic Tree or device such a tree based on this additional criteria. One could select only those routes that do not call for protection or has a minimum of such techniques.

Once a conscious decision is taken that protection free syntheses are ‘elegant’ in addition to being economical, one is more likely to come up with suitable schemes. Since industrial scale syntheses are mainly guided by cost factors, it is not surprising to find several industrial processes that are protection free syntheses. Protection / deprotection should be treated as a case of mind set rather than limitations of chemistry. Having said this in such strong terms, let us also concede that it may not be feasible to completely avoid protection / deprotection strategies. In support of these statements, we would soon look at some successful protection free synthesis in this chapter. In 2007, Phil S. Baran et.al., reported the total synthesis of some marine natural products without using protecting groups. While discussing the synthesis, the authors suggest that the following guidelines would be helpful while planning retro-analysis under this philosophy.

In an effort to prove their point, they have reported an efficient route for the synthesis of (+)-Ambiguine H. This synthesis is shown below (Fig 14.1). The strategic bond disconnections envisaged by these workers were guided on the above guidelines.

Since a route chosen is a deliberate choice of the researcher, it may not be fair to compare research publications based on different motives. I would be like comparing apples and oranges.Nature 446, 404 (2007) and references cited therein.

The proposed strategic disconnections for ambiguine H are shown below (Fig 14.1). 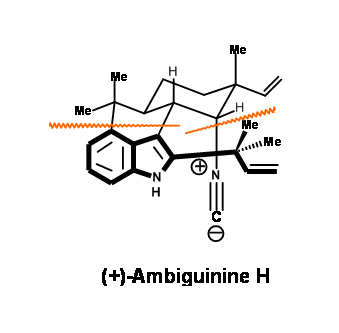 The first target was (-)-Hapalindole U for which the t-prenyl unit is not required. The top six membered ring unit came from the well-known terpene through four steps shown in (Fig 14.2) 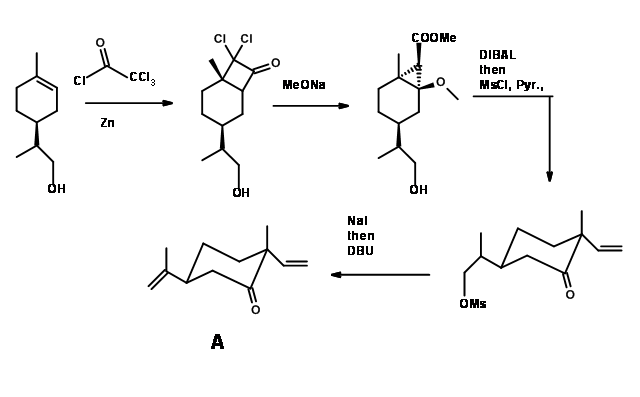 The α- position to the ketone in A was linked the C3 of indole without protection, using a reaction developed in their laboratory (J. Am. Chem. Soc., 127, 7459 (2004)) (Fig 14.3). The second coupling was attempted with several catalysts. The free radical Heck conditions failed. They led mainly to cyclisation at C2 of indole unit. Probing further, the reaction succeeded by using the technique of slow addition of Herrman’s catalyst. In the absence of NH group on indole, such reactions failed to give this coupling. Now conversion to the natural product (-)-Hapalindole U (A) needed stereoselective transformation of the carbonyl unit to isonitrile unit. This was achieved by stereocontroled, microwave assisted reductive amination followed by formylation and dehydration reactions to give (-)-Hapalindole U (A). All these reactions could be scaled up to the level of several grams. (-)-Hapalindole U was made in sufficient quantities and stored. The next target (+)-Ambiguine H was a very unstable compound, which was made as and when needed, using the following reactions.

(-)-Hapalindole U had several very reactive units in proximity. Introducing a prenyl unit into the crowded C2 region of the indole unit was very difficult (Fig 14.4). Treatment of t-BuOCl followed by prenyl-9-BBN led to a complex series of reaction, resulting in a crystalline product B. The formation of this product was rationalized by a cascade reaction mechanism shown in figure. Photolysis of B led to a Norrish-type cleavage, followed by rearrangement that got rid of all the extra groups on the skeleton to yield Ambiguine H. The reaction was not allowed to reach completion because the product was also sensitive to photolysis. The reported yield is based on recovered B. The insistence that no protection protocols would be permitted in the scheme gave not only a short route to the target compound, but also led to the use of Rearrangement Transforms, use of Cascade Reactions and led to new discoveries in chemical reactivities.

In old chemistry, you would come across several such complex targets (for that time), whose synthesis were achieved without (or with very few) protection / deprotection sequences. There are other syntheses reported in recent years that have followed a ‘no protection’ barrier in planning the syntheses . We could visit two more such synthesis in this chapter.

Kessane, a constituent of Japanese Valarian root is of interest due to its sedative and anxiolitic effect. In 2003, Booker-Milburn K. I. and co-workers reported an industrial synthesis of this compound in 8 steps following the theme ‘no protection / deprotection’. The outline of the synthesis is presented in (Fig 14.5) 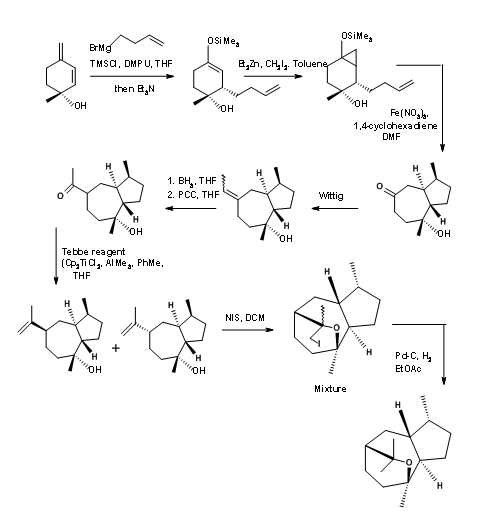 The use of transition metal reagents could aid in the construction of C – C bonds without the need for protective groups, as demonstrated by Baldwin’s group in 2006 (Fig 14.6). This synthesis of Bureothin was achieved in 7 steps with no protection protocol. Some rare molecular engineering marvels like R.B. Woodward’s synthesis of PGF (Fig 1.10.7) open up new concepts on ‘Protection’ in molecular synthesis. Note the way he incorporated a protecting group scaffold into the molecular mainframe. Unlike the usual way of thinking of protection / deprotection as an isolated operation, these workers subsequently incorporated this protecting unit into the molecular frame, thereby achieving ‘carbon economy’ well ahead to his time. These concepts of green chemistry came decades later. Also revisit some of the biogenetic type cyclisation reaction discussed earlier in the light of Green Chemistry.

Any doubt on feasibility of protection free synthesis could be laid to rest. However, at the present state of developments in common synthetic methodologies, the protection free methodology has its limitations too. At present, it appears inconceivable to bring about a medium sized peptide or nucleotide with such a protection free protocols. This could also be true to several other syntheses of complex molecules. The main thesis of this essay is that it is practical to conceive such protection free synthetic protocols. This falls within the call of Green Chemistry. Though this has been the watchword in industrial synthesis, Baran’s 2007 paper coined the idiom “Protection-free synthesis’ and drew attention to such a possibility. Since then several papers have appeared with this idiom. One can be assured that such a basic green concept cannot be a passing fade. It is more likely to mark a corner stone in the logic of organic synthesis.