Cedrene represents a very complex tricyclic sesquiterpene. Such complexity called for ingenious approaches for the total synthesis of the ring system. There are several syntheses reported for this ring system. We would discuss a few approaches. Some strategic bond cleavages are shown as broken lines in Figure 8.1. Disconnection at ‘a’: G. Stork et.al., (J. Am. Chem. Soc., 77, 1078 (1955); ibid, 83, 3114 (1961)) took advantage of the fact that fused five membered rings would be cis- fused. Such a system would have a crowded ‘concave phase’. These two features formed the basis for Stork’s synthesis of Cedrene. Their synthetic scheme is shown in Figure 8.2. The first alkylation set in motion the steric out come of the remaining steps. Disconnection at ‘b’ and ‘d’: Based on biogenetic cyclization concept, Corey achieved a one-step cyclization of the A and B rings (Figure 8.4) onto a preformed C ring (Tet. Lett., 2455 (1972)). The key for success in this scheme is the prior formation of bond ‘d’ followed by the formation of the ‘b’ bond. Note the role of a cyclopropyl ketone that orchestrated the development of a carbonium ion followed by an incipient carbanion to complete the A and B rings in this order. 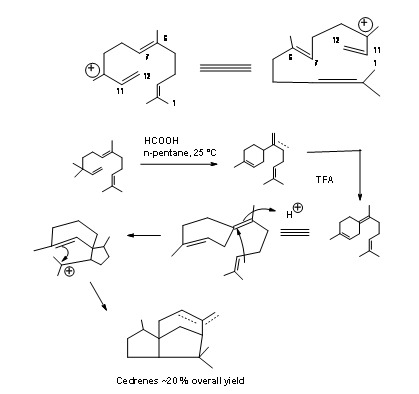 Disconnection at ‘b’ and ‘d’: An approach by Chen et.al., (Tet. Lett., 2961 (1993)) relied on the free radical cyclization reaction on a suitably fuctionalized C ring (Figure 8.7). The synthesis of C ring is achieved via., a DA reaction. Knoevenagal reaction placed the required chain for completing the A and B rings. Tin hydride reduction generated a free radical at the site of the nitro group, which underwent a tandem cyclization to complete the A and B rings in that order. A Diels-Alder approach to to tricyclic cedrene skeleton was reported by Breitholle et.al., (Can. J. Chem., 54, 1991 (1976) (Figure 8.8). Alkylation of cyclobutadiene to the requisite chain gave 8.8A after equilibration. The DA reaction proceeded in 36% yield to give a mixture of isomers. The ketone 8.8B did not undergo ring expantion with diazomethane. The ring expansion was finally achieved via the methylene amine 8.8C via diazotisation. The fact that two ring expansion products 8.8D and 8.8E were formed with 8.8D as the major product suggests that the amine 8.8F was the major isomer.