Benzene and many of its derivatives are manufactured on a large scale for use in high-octane gasolines and in the production of polymers, insecticides, detergents, dyes, and many miscellaneous chemicals. Prior to World War II, coal was the only important source of aromatic hydrocarbons, but during the war and thereafter, the demand for benzene, methylbenzene, and the dimethylbenzenes rose so sharply that other sources had to be found. Today, most of the benzene and almost all of the methylbenzene and the dimethylbenzenes produced in the United States are derived from petroleum.

Coal tar, which is a distillate obtained in the coking of coal (Section 4-2), is a source of an amazing number of aromatic compounds. Some of these are listed in Table 22-7, which includes nitrogen, oxygen, and sulfur compounds, as well as hydrocarbons. Although petroleum from some locations contains fairly substantial amounts of aromatic hydrocarbons, it is not a principal source for such compounds. Rather, aromatic compounds are synthesized from the \(\ce{C_6}\)-\(\ce{C_{10}}\) gasoline fraction from petroleum refining by a process referred to in the petroleum industry as catalytic re-forming or hydroforming. This involves heating a \(\ce{C_6}\)-\(\ce{C_{10}}\) fraction with hydrogen in the presence of a catalyst to modify the molecular structure of its components. Some amazing transformations take place, and the \(\ce{C_6}\)-\(\ce{C_7}\) alkanes can be converted to cycloalkanes, which, in turn, are converted to arenes. Benzene, methylbenzene (toluene), and the dimethylbenzenes (xylenes) are produced primarily in this way: 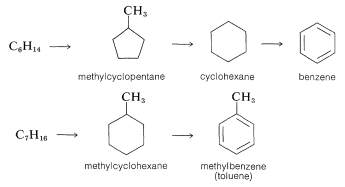