Compared to straight-chain conjugated polyenes, aromatic compounds have relatively complex absorption spectra with several bands in the ultraviolet region. Benzene and the alkylbenzenes show two bands in which we shall be primarily interested, one near \(200 \: \text{nm}\) and the other near \(260 \: \text{nm}\). The \(200\)-\(\text{nm}\) band is of fairly high intensity and corresponds to excitation of a \(\pi\) electron of the conjugated system to a \(\pi^*\) orbital (i.e., a \(\pi \rightarrow \pi^8*\) transition). The excited state has significant contributions from dipolar structures such as \(1\):

This is analogous to the absorption bands of conjugated dienes (Section 9-9B) except that the wavelength of absorption of benzenes is shorter. In fact, the \(200\)-\(\text{nm}\) absorptions of benzene and the alkylbenzenes are just beyond the range of most commercial quartz spectrometers. However, these absorptions (which we say arise from the benzene chromophore\(^2\)) are intensified and shifted to longer wavelengths when the conjugated system is extended by replacement of the ring hydrogens by unsaturated groups (e.g., \(\ce{-CH=CH_2}\), \(\ce{-C \equiv CH}\), \(\ce{-CH=O}\), and \(\ce{-C \equiv N}\); see Table 22-2). The delocalized \(\pi\)-electron system of the absorbing chromophore now includes the electrons of the unsaturated substituent as well as those of the ring. In the specific case of ethenylbenzene the excited state is a hybrid structure composite of \(2a\) and \(2b\) and other related dipolar structures:

Table 22-2: Effect of Conjugation on Electronic Absorption by the Benzene Chromophore

Similar effects are observed for benzene derivatives in which the substituent has unshared electron pairs that can be conjugated with the benzene ring (e.g., \(\ce{-NH_2}\), \(\ce{-OH}\), \(\ce{-Cl}\)). An unshared electron pair is to some extent delocalized to become a part of the aromatic \(\pi\)-electron system in both the ground and excited states, but more importantly in the excited state. This is illustrated for benzenamine (aniline) by the following structures, which contribute to the hybrid structure:

Table 22-3: Effect of Auxochromic Substituents on Electronic Absorption by the Benzene Chromophore

Table 22-4: Effects of Structure on Electronic Absorption Corresponding to the Benzenoid Band The benzenoid band corresponds to a low-energy \(\pi \rightarrow \pi^*\) transition of the benzene molecules. The absorption intensity is weak because the \(\pi^*\) state involved has the same electronic symmetry as the ground state of benzene, and transitions between symmetrical states usually are forbidden. The transitions are observed in this case only because the vibrations of the ring cause it to be slightly distorted at given instants. In the valence-bond treatment this excited state of benzene is an antibonding state of the \(\pi\) electrons.

The electronic spectra of polynuclear aromatic hydrocarbons such as naphthalene and anthracene, in which aromatic rings are fused together in a linear manner, resemble the spectrum of benzene except that the bands are shifted to longer wavelengths. In fact, with the four linearly connected rings of naphthacene, the benzenoid band is shifted far enough to longer wavelengths to be in the visible region of the spectrum (see Table 22-4). Accordingly, naphthacene is yellow. The next higher member, pentacene, is blue.

Compounds such as phenanthrene, chrysene, and pyrene, in which the aromatic rings are fused in an angular manner, have complex electronic spectra with considerable fine structure. The \(\lambda_\text{max}\) values normally are at shorter wavelengths than those of their linear isomers.

At least part of the chemical-shift difference between arene protons and alkene protons is the result of the special property of \(\pi\) electrons in aromatic systems of circulating freely above and below the plane of the carbon nuclei, as shown in Figure 22-4. When a molecule such as benzene is subjected to a magnetic field that has a component perpendicular to the plane of the ring, the electrons circulate around the ring in such a way as to produce a local magnetic dipole in the direction opposite to the applied field. This diamagnetic shielding effect acts to reduce the applied field in the center of the ring. Therefore, if a proton could be located in the center of the ring, the applied field would have to be higher than normal to counteract the local diamagnetic field and bring the proton into resonance. A proton outside the ring is affected in the opposite way (paramagnetic deshielding effect) because, as can be seen from the diagram, such protons are located in the return path of the lines of force associated with the local field and thus are in a field greater than that arising from the external magnet alone. When the plane of the molecule is oriented parallel to the field, the diamagnetic circulation is cut off. As a result, as the molecules tumble over and over in the liquid the component of magnetization perpendicular to the plane of the ring varies rapidly. Nonetheless, a substantial net paramagnetic effect is experienced by the ring hydrogens. The resonance line positions therefore are shifted to lower magnetic fields.

Strong evidence in confirmation of the above explanation of the chemical shifts of aromatic hydrogens is provided by a study of the cyclic conjugated polyene [18]annulene, which has hydrogens both "inside" and "outside" the ring: 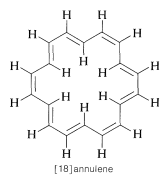 Such a spectrum is much too complex to be analyzed by any simple procedure. Nonetheless, nuclear magnetic resonance can be useful in assigning structures to aromatic derivatives, particularly in conjunction with integrated line intensities and approximate values of the coupling constants between the ring hydrogens, as shown below:

\(^2\)A chromophore is a grouping of atoms in an organic molecule that gives rise to color, or has the potential of doing so when other groups called auxochromes are present (also see Section 28-4).