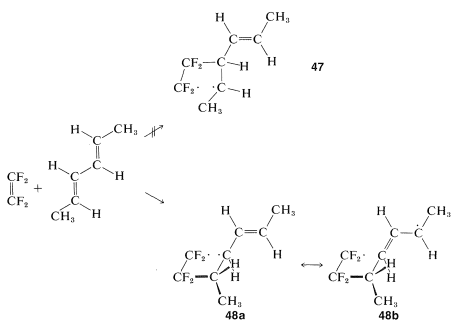 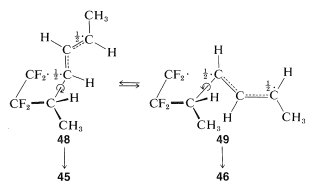 The profile of energy versus reaction coordinate in this kind of complex process is shown in two different ways in Figure 21-17. The relative energies of the several transition states determine the degree to which \(48\) and \(49\) are equilibrated before the ring closes and \(45\) and \(46\) are formed; for our purposes it is enough to known that \(49\) is present and is the precursor of \(46\). 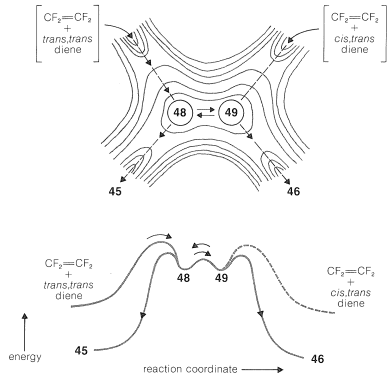 Figure 21-17: Schematic representation of the energy of the stepwise addition of \(\ce{CH_2=CF_2}\) to trans,trans-2,4-hexadiene. The lower diagram is a schematic "cross section" that shows everything in two dimensions. If \(48\) and \(49\) dissociate to \(\ce{CF_2=CF_2}\) and diene, \(48\) will return the trans,trans isomer, but \(49\) will go to the cis,trans diene through the transition state represented by the dashed line. In some [2 + 2] cycloadditions of this type, trans,trans to cis,cis isomerizations are observed in competition with cycloaddition, as expected for breaking apart the intermediate corresponding to \(49\). The upper diagram is an attempt to show the topographical relationship between the reactants and products on an energy-contour diagram. The pathways of minimum energy, which would correspond on a topographical map to trails through mountain passes, are shown by dashed arrows.