Glucose is an aldohexose, which means that it is a six-carbon sugar with a terminal aldehyde group, shown by \(1\): The carbons labeled with an asterisk in \(1\) are chiral; thus there are \(2^4\), or sixteen, possible configurational isomers. All are known - some occur naturally and the others have been synthesized (see Table 20-1). The problem of identifying glucose as a particular one of the sixteen possibilities was solved by Emil Fischer during the latter part of the nineteenth century, for which he was awarded the Nobel Prize in chemistry in 1902. The configurations he deduced for each of the chiral carbons, \(\ce{C_2}\)-\(\ce{C_5}\), are shown in the projection formula \(2\).\(^2\) Although Fischer was aware that natural glucose could be the enantiomer of Structure \(2\), his original guess at the absolute configuration proved to be correct and the configuration at \(\ce{C_5}\) is the same as the configuration of the simplest "sugar" \(D\)-\(\left( + \right)\)-glyceraldehyde, \(3\), (see Section 19-5). Therefore natural glucose is specifically \(D\)-glucose:

The complete logic of Fischer's procedures for determination of the configuration of glucose is too involved to be explained here in detail. What you will be unable to fully appreciate is the great difficulties of working with carbohydrates - that is, their considerable solubility in water, instability to strong oxidizing agents and acidic or basic reagents, reluctance to crystallize, and their tendency to decompose rather than give sharp melting points. Fortunately for Fischer, many different pentoses and hexoses already were available from the efforts of earlier investigators, and the principles of optical isomerism were well understood as the result of the work of van't Hoff.

Two of the key ideas used by Fischer can be illustrated best with aldotetroses because they have only two chiral carbons and far fewer possible structures to consider. Writing the four possibilities as the aldehyde rather than hemiacetal structures, we have \(4\)-\(7\). Of these, \(4\) and \(5\) constitute a pair of enantiomers, as do \(6\) and \(7\). These pairs can be identified by careful oxidation of the terminal groups to give the corresponding tartaric (2,3-dihydroxybutanedioic) acids. Oxidation of both \(4\) and \(5\) gives meso-tartaric acid, whereas oxidation of \(6\) and \(7\) gives, respectively, \(\left( + \right)\) and \(\left( - \right)\) tartaric acids: 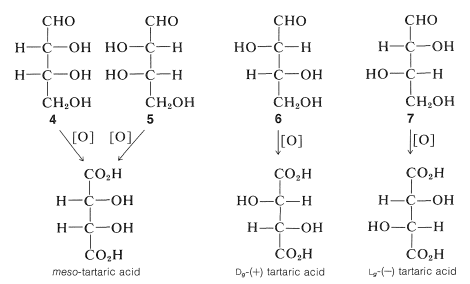 It should be clear from this that the configurations of \(6\) and \(7\) are established by being related to the respective chiral tartaric acids. However, we have no way of telling which of the tetroses represented by \(4\) and \(5\) is \(D\) and which is \(L\), because, on oxidation, they give the same achiral tartaric acid. What we need to do is relate one or the other of the chiral carbons of these tetroses to the corresponding carbon of either \(6\) or \(7\). One way that this can be done is by the Wohl degradation, whereby the chain length is reduced by one carbon by removing the aldehyde carbon:

Here we see that \(4\) and \(6\) give the same enantiomer, \(D\)-glyceraldehyde, and therefore have the same configuration of their highest-numbered asymmetric carbon. In contrast, \(5\) and \(7\) give \(L\)-glyceraldehyde and thus must be similarly related. By this kind of procedure, the configurations of \(4\) to \(7\) can be established unequivocally, although, as you might imagine, it is far easier to do on paper than in the laboratory.

Products \(8\) and \(9\) present a new configurational problem, but a less difficult one than before, because the configurations of two of the three chiral centers already are known. Controlled oxidation of \(8\) and \(9\) will give different diastereomeric 2,3,4-trihydroxypentanedioic acids, \(10\) and \(11\), respectively:

Of these, \(11\) is achiral (meso), whereas \(10\) is chiral. Therefore, by simply determining which oxidation product is optically active, and hence chiral, we can assign the configurations of \(8\) and \(9\). Direct comparison of these synthetic aldopentoses with the naturally occurring compounds then could be used as proof of the structure of natural aldopentoses. By this reasoning \(8\) turns out to be \(D\)-arabinose and \(9\) is \(D\)-ribose.

Some of the key reactions in carbohydrate chemistry involve oxidation of aldoses to carboxylic acids. There is a simple nomenclature system for these acids. In abbreviated notation, the products of oxidation at \(\ce{C_1}\), \(\ce{C_6}\), or both are called:

Although glucose has some of the properties expected of an aldehyde, it lacks others. For example, it forms certain carbonyl derivatives (e.g., oxime and cyanohydrin), and can be reduced to the hexahydroxyhexane (sorbitol), and oxidized with bromine to gluconic acid (a monocarboxylic acid). (With nitric acid, oxidation proceeds further to give the dicarboxylic acid, \(D\)-glucaric acid.)

Glucose also will reduce Fehling's solution \(\left[ \ce{Cu} (II) \rightarrow \ce{Cu} (I) \right]\) and Tollen's reagent \(\left[ \ce{Ag} (I) \rightarrow \ce{Ag} (0) \right]\) and, for this reason, is classified as a reducing sugar.\(^4\) However, it fails to give a hydrogen sulfite addition compound and, although it will react with amines \(\left( \ce{RNH_2} \right)\), the products are not the expected Schiff's bases of the type \(\ce{-C=NR}\). Furthermore, glucose forms two different monomethyl derivatives (called methyl \(\alpha\)-\(D\)-glucoside and methyl \(\beta\)-\(D\)-glucoside) under conditions that normally convert an aldehyde to a dimethyl acetal:

All of these reactions can be explained on the bases that the carbonyl group is not free in glucose but is combined with one of the hydroxyl groups, which turns out to be the one at \(\ce{C_5}\), to form a hemiacetal, \(12\) or \(13\). Why are two hemiacetals possible? Because a new asymmetric center is created at \(\ce{C_1}\) by hemiacetal formation, and this leads to diastereomeric forms of \(D\)-glucose called \(\alpha\)-\(D\)-glucose and \(\beta\)-\(D\)-glucose. In general, carbohydrate stereoisomers that differ only in configuration at the hemiacetal carbon are called anomers: 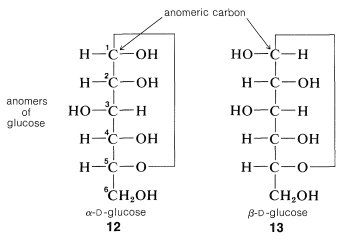 Although formulas \(12\) and \(13\) show the configurations at each of the chiral centers, they do not provide the crucial information for understanding the properties of glucose with respect to the arrangement of the atoms in space. Conversion of a projection formula such as \(12\) or \(13\) to a three-dimensional representation is not at all a trivial task. We have indicated the procedure for doing in before (Sections 5-3C and 5-5). The result of these procedures applied to \(12\) and \(13\) are the so-called Haworth projection formulas, \(14\) and \(15\), and the sawhorse conformations, \(16\) and \(17\): 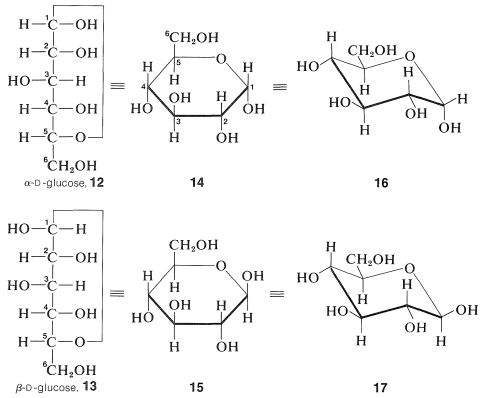 You should be able to satisfy yourself that the configuration at \(\ce{C_5}\) is the same in both Fischer and Haworth representations. This amounts to asking if \(18\) and \(19\) represent the same configurations:

X-ray studies of crystalline \(\alpha\)- and \(\beta\)-\(D\)-glucose show that these molecules have their atoms arranged in space as correspond to \(16\) and \(17\). This is what we would expect from our studies of cyclohexane conformations (Sections 12-3A to 12-3D), because for the \(\beta\) form, all of the substituents on the oxacyclohexane ring are in equatorial positions, and for the \(\alpha\) form, all except the hydroxyl at the anomeric carbon \(\left( \ce{C_1} \right)\) are equatorial.

Mutarotation of the Anomeric Forms of Glucose

Although the crystalline forms of \(\alpha\)- and \(\beta\)-\(D\)-glucose are quite stable, in solution each form slowly changes into an equilibrium mixture of both. The process can be observed as a decrease in the optical rotation of the \(\alpha\) anomer \(\left( +112^\text{o} \right)\) or an increase for the \(\beta\) anomer \(\left( +18.7^\text{o} \right)\) to the equilibrium value of \(52.5^\text{o}\). The phenomenon is known as mutarotation and commonly is observed for reducing sugars. Both acids and bases catalyze mutarotation; the mechanism, Equation 20-1, is virtually the same as described for acid- and base-catalyzed hemiacetal and hemiketal equilibria of aldehydes and ketones (see Section 15-4E): At equilibrium, about \(64\%\) of the \(\beta\) anomer and \(36\%\) of the \(\alpha\) anomer are present. The amount of the free aldehyde form at equilibrium is very small (about 0.024 mole percent in neutral solution). Preponderance of the \(\beta\) anomer is attributed to the fact that glucose exists in solution in the chair conformation with the large \(\ce{-CH_2OH}\) group equatorial. In this conformation, the hydroxyl substituent at \(\ce{C_1}\) is equatorial in the \(\beta\) anomer and axial in the \(\alpha\) anomer; hence the \(\beta\) anomer is slightly more stable. When glucose is in the aldehyde form, the hydroxyl at \(\ce{C_4}\) also could add to the aldehyde carbonyl to produce a hemiacetal with a five-membered ring. This does not occur to a significant degree with glucose because the hemiacetal with the six-membered ring and many equatorial groups is more stable. With other sugars, mixtures of five- and six-membered hemiacetal or ketal rings and their respective anomers are produced in water solution. The rearrangement is of interest because the corresponding enzymatic interconversion of aldoses and ketoses is an important part of the biosynthetic, photosynthetic, and metabolic pathways, as we shall see in Section 20-9. Although the biochemical rearrangement also may proceed by way of enediol intermediates, it is highly stereospecific and yields only one of two possible stereoisomeric aldoses. For example, glucose, but not mannose, can be enzymatically interconverted with fructose as the 6-phosphate ester derivative:

\(^3\)The steps of the Kiliani-Fischer synthesis are: