There is wide diversity in the nature of organohalogen compounds but, of necessity, we have restricted this chapter to alkyl, cycloalkyl, alkenyl, alkynyl, and aryl halides. Some of the chemistry of the carbon-halogen bonds already will be familiar to you because it involves the addition, substitution, and elimination reactions discussed in previous chapters. To some extent, we will amplify these reactions and consider nucleophilic substitution by what are called the addition-elimination and elimination-addition mechanisms. Subsequently, we will discuss the formation of carbon-metal bonds from carbon-halogen bonds. The latter type of reaction is of special value because compounds that have carbon-metal bonds are potent reagents for the formation of carbon-carbon bonds, as we will show later in this chapter.

Although large numbers of organohalogens are known, very few of them occur naturally. Thyroid hormones (e.g., thyroxine) that contain iodine are exceptions; other organohalogens are found as mold metabolites (such as griseofulvin) and in marine organisms: 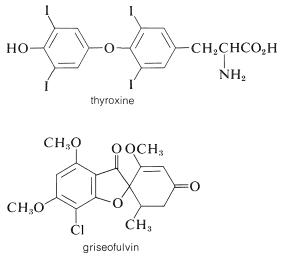 Almost all of the organohalogen compounds in use today are synthetic in origin. You may wonder why, if nature doesn’t choose to make them, man elects to do so. The main interest to us here is that they are very useful intermediates for the synthesis of a wide range of other compounds. However, vast quantities of synthetic halogen compounds, particularly polyhalogen compounds, are used as pesticides, cleaning solvents, anaesthetics, aerosol propellants, refrigerants, polymers, and so on. The wisdom of this massive use of materials that are foreign to our natural environment gradually is being reevaluated as the long-term detrimental effects of many of these chemicals become known. For example, many of the chlorinated hydrocarbons such as DDT, Chlordane, and Lindane, which have been used very widely as insecticides, now are at least partially banned because of concern for their long-term effects on nontarget species, including man. Sometimes the long-term effects are quite unexpected and difficult to predict. For example, millions of kilograms of \(\ce{CF_2Cl_2}\), which is used as a propellant, have been released into the atmosphere from aerosol cans. This compound appears to be wholly free of direct adverse physiological effects. However, as the substance diffuses into the upper atmosphere, it is slowly decomposed by sunlight to produce chlorine atoms. Serious danger then is possible because chlorine atoms are known to catalyze the decomposition of ozone, and it is the ozone layer in the upper atmosphere that absorbs most of the sun’s ultraviolet radiation that is strongly harmful to life.