The general character of alkene polymerization by radical and ionic mechanisms was discussed briefly in Section 10-8. The same principles apply to the polymerization of alkadienes, with the added feature that there are additional ways of linking the monomer units. The polymer chain may grow by either 1,2 or 1,4 addition to the monomer. With 1,3-butadiene, for example,

In 1,2 addition, a chiral carbon (marked with \(^*\)) is created as each molecule of the monomer adds to the growing chain radical. The physical properties of the polymer greatly depend on whether these carbons have the same or different configurations, as we will show in greater detail in Chapter 29. However, in polymer nomenclature, an isotactic polymer is one with essentially all chiral carbons having the same configuration, whereas an atactic polymer has a random ordering of the chiral carbons with different configurations.

For polymerization of 1,3-butadiene by 1,4 addition, there are no chiral carbons, but there is the possibility of cis-trans isomerism:

A polymer made of identical repeating units is called a homopolymer. If the units are nonidentical, as when different monomers are polymerized, the product is called a copolymer.

Many of the polymers formed from conjugated dienes are elastic and are used to manufacture synthetic rubbers. The raw polymers usually are tacky and of little direct use, except as adhesives and cements. They are transformed into materials with greater elasticity and strength by vulcanization, in which the polymer is heated with sulfur and various other substances called accelerators, with the result that the polymer chains become cross-linked to one another by carbon-sulfur and carbon-carbon bonds. Some of the cross-linking appears to occur by addition to the double bonds, but the amount of sulfur added generally is insufficient to saturate the polymer. With large proportions of sulfur, hard rubber is formed such as is used in storage-battery cases.

Because of the many double bonds present, diene rubbers are sensitive to air oxidation unless antioxidants are added to inhibit oxidation.

Several rubbers that have desirable properties of elasticity, flexibility, abrasive resistance, and resistance to chemicals are listed in Table 13-2. The homogeneity of these polymers depends greatly on the way in which they are prepared, particularly on the polymerization catalyst employed. A synthetic rubber that is virtually identical to natural Hevea rubber is made from 2-methyl-1,3-butadiene (isoprene) using finely divided lithium metal or transition-metal catalysts; the product is formed almost exclusively by cis 1,4 addition\(^3\): 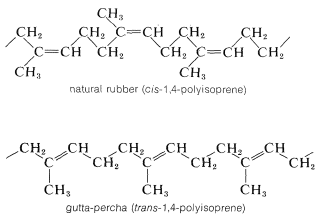 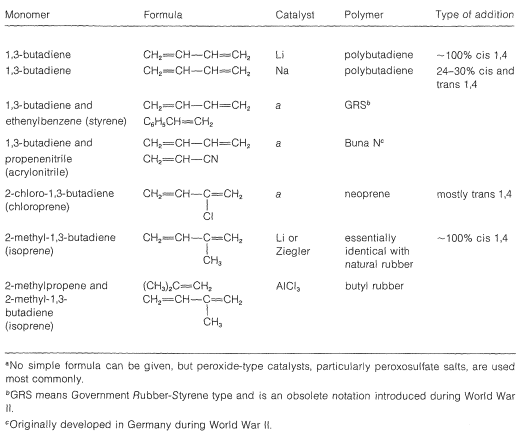 Gutta-percha, the trans 1,4-isomer of natural rubber, is hard and brittle at room temperature. The reason for the difference in properties between the cis and trans isomers readily can be seen by inspecting molecular models. The chains with trans double bonds are able to lie along side of each other, forming a semicrystalline array, as shown in Figure 13-2. This ordered arrangement cannot be deformed easily, hence the material is hard and brittle. However, when the double bonds are cis, steric hindrance prevents the chains from assuming a similar ordered structure and the bulk of the material exists in a noncrystalline (amorphous) state with randomly oriented chains. When the cis polymer is stretched, the chains straighten out and tend to become oriented; but because this is an unstable state, the material snaps back to the amorphous state when released. The overall process accounts for the elastic properties of rubber and other similar materials. Figure 13-2: Schematic representation of the configuration of chains in gutta-percha (trans-1,4-polyisoprene).

Polymerization of 2-methylpropene in the presence of small amounts of 2-methyl-1,3-butadiene (isoprene) gives a copolymer with enough double bonds to permit cross-linking of the polymer chains through vulcanization. The product is a hard-wearing, chemically resistant rubber called “butyl rubber.” It is highly impermeable to air and is used widely for inner tubes for tires.

\(^3\)Synthetic rubber has provided severe competition for natural rubber and, for many years, it seemed as though rubber plantations eventually would become extinct. However, rising petroleum prices and higher 2-methyl-1,3-butadiene costs coupled with methods developed for greatly increasing the output of rubber latex per tree, and the fact that natural rubber has superior properties in radial automobile tires, have reversed the trend and rubber plantations currently are being expanded.