Sodium is metallic element found in the first group of the periodic table. As the sixth most abundant element in the Earth's crust, sodium compounds are commonly found dissolved in the oceans, in minerals, and even in our bodies.

Sodium is an element that is a member of the alkali metal group with a symbol Na. It is physically silver colored and is a soft metal of low density. Pure sodium is not found naturally on earth because it is a highly reactive metal. The sodium ion is abundantly found within the Earth's oceans, bodies of water, and many minerals. It is used for chemical synthesis, analysis, and heat transfer applications. Sodium is also a crucial element for animal and plant life by creating charge gradients and assisting in the development of energy.

Sodium was discovered and isolated in 1807 by Sir Humphry Davy. In its pure form it is silvery white and soft enough to cut with a knife. It is the sixth most abundant element in the earth's crust, occurring in large amounts in both (sea)water and soil in various mineral compounds, the most common of which is sodium chloride.

The metal melts below the boiling point of water (97oC). In its elemental state it has been used as a molten coolant in nuclear reactors and is currently under research for sodium/sulfur batteries. Its most common compounds for industrial use include sodium chloride, sodium hydroxide (lye), sodium carbonate (washing soda) and sodium sulfate. 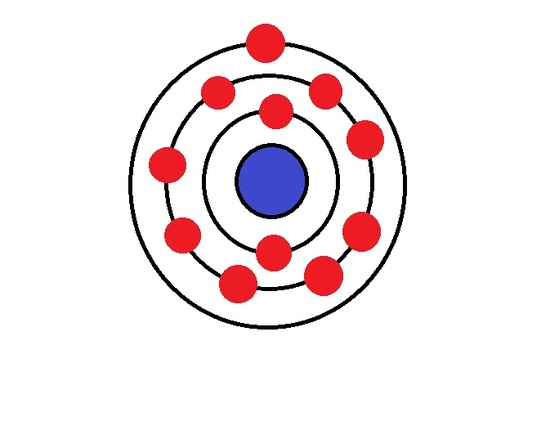 Sodium is perhaps the most characteristic alkali metal, reacting violently with water and rapidly with the oxygen in air. It symbol (Na) comes from its Latin name, Natria, whereas its English name is taken from soda which contains it.

As a part of the alkali metal group in the periodic table, sodium is highly reactive and is never found pure in nature. It tarnishes easily and has a low melting point and density. Therefore, sodium is usually stored in mineral oil or kerosene. Chemically, sodium is highly reactive with the halogen family to form ionic salts. For example, sodium is commonly found combined with chloride to form NaCl, known to us as table salt. It has one electron in the outermost electron shell and thus wants to give up one electron to a highly electronegative element.

Sodium reacts exothermically with water, releasing heat when in contact with water. The chemical equation:

Sodium tends to form water-soluble compounds, such as halides, sulfate, nitrate, carboxylates and carbonates. But examples of many insoluble sodium compounds such as sodium bismuthate (NaBiO3), sodium octamolybdate (Na2Mo8O25·4H2O), sodium thioplatinate (Na4Pt3S6), and sodium uranate (Na2UO4) is found in nature.

Sodium has thirteen isotopes. 23Na is the only stable isotope.

22Na has the longest half life. It is used to study ion transporters, create test-objects and point-sources for Positron emission tomography.

The word sodium derives from the Arabic word suda, meaning headache because sodium compounds were used in early periods for its headache relieving properties. Its headache-alleviating remedies were also utilized in medieval Europe, known by the Latin name sodanum. Its significance in history can be identified through the wafers of salt called salarium given to Roman soldiers during early classical civilizations.

Sodium's chemical abbreviation Na is a contraction of the element's Latin name natrium, derived from the Egyptian natron, a natural mineral salt. This abbreviation was first published by Jons Jakob Berzelius in his system of atomic symbols. By 1807, Sir Humphry Davy first used electrolysis of caustic soda to isolate pure sodium from its compound in London.

Sodium is found as a compound in nature due to its high reactivity. It is found in a variety of minerals, but the most common is table salt (NaCl), largely found in seawater and in solid deposits. Other compounds include amphibole, cryolite, soda niter and zeolite. Within the Earth’s crust, sodium is the sixth most abundant element overall and the most abundant alkali metal. It makes up about 2.6% of the Earth’s crust by weight.

Sodium is also abundant in stars, as the D spectral lines of this element are the most prominent in star light. Its presence in the atmosphere of planet Mercury was detected by ground telescopes and confirmed by spacecraft Mariner 10 and MESSENGER because of its high abundance and intense spectral lines.

In metallic form, sodium can be used to refine reactive metals such as zirconium and potassium, improve alloy structures, descale metal and purify molten metals. It is often used as a desiccant for drying solvents in chemistry and is also used as a reducing agent in organic synthesis. The sodium fusion test uses sodium's physical properties to qualitatively analyze other compounds.

Sodium vapor lamps is also used for street lighting in cities. The low-pressure sodium lamps display a yellow-orange light from the predominantly sodium D lines. High pressure sodium lamps give a peach-colored light from the array of spectrum lines. Its most common compounds for industrial use include sodium chloride, sodium hydroxide (lye), sodium carbonate (washing soda) and sodium sulfate.

The sodium ion is vital to animal life because it maintains body fluid volumes and maintains electric potential in animal tissue. In soap, sodium is used as sodium salts of fatty acids because it is harder and higher melting than other soaps. In medicine, the salt form of a medication with high sodium or potassium ingredient can improve bioavailability. A compound of sodium and chloride (NaCl) is an important material for heat transfer.

In its elemental state it has been used as a molten coolant in nuclear reactors and is currently under research for sodium/sulfur batteries. Sodium acts as a heat transfer fluid in some nuclear reactors and inside hollow valves of high-performance internal combustion engines. When the reactor is consistently running, a pure sodium coolant is used because sodium melts at about 98 °C. However, when the reactor is shut down, the sodium can melt the cooling pipes. Therefore, if the reactors need to be shut down often, the alloy of sodium and potassium is used because the compound melts at -11 °C so the cooling pipes will not freeze at room temperature.

The most common compound of sodium, sodium chloride, is used in food for seasoning and preservation. For example, common salt is used for pickling and making jerky. A healthy sodium intake for the human diet is about 1.5 grams per day. However, the intake of sodium for most people is typically ten times more than the necessary dietary amount. *highlight for the answers