Odd-numbered π systems—most notably, the allyl and cyclopentadienyl ligands—are formally LnX-type ligands bound covalently through one atom (the “odd man out”) and datively through the others. This formal description is incomplete, however, as resonance structures reveal that multiple atoms within three- and five-atom π systems can be considered as covalently bound to the metal. To illustrate the plurality of equally important resonance structures for this class of ligands, we often just draw a curved line from one end of the π system to the other. Yet, even this form is not perfect, as it obscures the possibility that the datively bound atoms may dissociate from the metal center, forming σ-allyl or ring-slipped ligands. What do the odd-numbered π systems really look like, and how do they really behave? 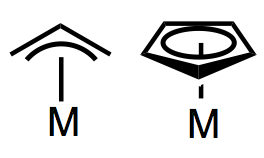 Allyls are often actor ligands, most famously in allylic substitution reactions. The allyl ligand is an interesting beast because it may bind to metals in two ways. When its double bond does not become involved in binding to the metal, allyl is a simple X-type ligand bound covalently through one carbon—basically, a monodentate alkyl! Alternatively, allyl can act as a bidentate LX-type ligand, bound to the metal through all three conjugated atoms. The LX or “trihapto” form can be represented using one of two resonance forms, or (more common) the “toilet-bowl” form seen in the general figure above. I don’t like the toilet-bowl form despite its ubiquity, as it tends to obscure the important dynamic possibilities of the allyl ligand. Can we use FMO theory to explain the wonky geometry of the allyl ligand?

The lower half of the figure above illustrates the slightly weird character of the geometry of allyl ligands. In a previous post on even-numbered π systems, we investigated the orientation of the ligand with respect to the metal and came to some logical conclusions by invoking FMO theory and backbonding. A similar treatment of the allyl ligand leads us to similar conclusions: the plane of the allyl ligand should be parallel to the xy-plane of the metal center and normal to the z-axis. In reality, the allyl plane is slightly canted to optimize orbital overlap—but we can see at the right of the figure above that π2–dxy orbital overlap is key. Also note the rotation of the anti hydrogens (anti to the central C–H, that is) toward the metal center to improve orbital overlap. Upon deconstruction, the cyclopentadienyl (Cp) ligand yields the aromatic cyclopentadienyl anion, an L2X-type ligand. Cp is normally an η5-ligand, but η3 (LX) and η1 (X) forms are known in cases where the other ligands on the metal center are tightly bound. η1-Cyclopentadienyl ligands can sometimes be fluxional—the metal has the ability to “jump” from atom to atom. Variations on the Cp theme include Cp* (C5Me5) and the monomethyl version (C5H4Me). Cp may be found as a loner alongside other ligands (in “half-sandwich” or “piano-stool” complexes), or paired up with a second Cp ligand in metallocenes. The piano-stool and bent metallocene complexes are most interesting for us, since these have potential for open coordination sites—plain vanilla metallocenes tend to be relatively stable and boring. Binding modes of Cp and general classes of Cp complexes.

Research for this post has made me appreciate the remarkable electron-donating ability of the cyclopentadienyl (Cp) ligand, which renders its associated metal center electron rich. The LUMO of Cp is high in energy, so the ligand is a weak π-acid and is, first and foremost, a σ-donor. This effect is apparent in the strong backbonding displayed by Cp carbonyl complexes. Despite its strong donating ability, Cp is rarely an actor ligand unless another ligand shakes things up—check out the nucleophilic reactivity of doubly jazzed-up ferrocene for a nice example.

It’s critical to recognize that η5-Cp is a six-electron ligand (!). Because Cp piles on electrons, the numbers of ligands bound to the metal in Cp complexes tend to be lower than we might be used to, especially in bent metallocenes containing two Cp’s. Still, the number of ligands we’d expect on the metal center in these complexes is perfectly predictable. We just need to keep in mind that the resulting complexes are likely to contain 16 or 18 total electrons.

By considering the MCp2 fragment, we can predict the nature of ancillary ligands in bent metallocenes.

Crabtree cleanly divides methods for the synthesis of Cp complexes into those employing Cp+ equivalents, Cp– equivalents, and the neutral diene. Naturally, the first class of reagents are appropriate for electron-rich, nucleophilic complexes, while the second class are best used in conjunction with electron-poor, electrophilic complexes. The figure below provides a few examples. Methods for the synthesis of Cp complexes. The possibilities are exhausted by anionic, cationic, and neutral Cp equivalents!

Methods for synthesizing allyl complexes can also be classified according to whether the allyl donor is a cationic, anionic, or neutral allyl equivalent. In metal-catalyzed allylic substitution reactions, the allyl donor is usually a good electrophile bearing a leaving group displaced by the metal (an allyl cation equivalent). However, similar complexes may be obtained through oxidative addition of an allylic C–H bond to the metal, as in the synthesis of methallyl palladium chloride dimer below. Transmetalation of nucleophilic allyls from one metal to another, which we can imagine as nucleophilic attacks of an anionic allyl group, are useful when the metal is electron-poor.

Complexes containing conjugated dienes are also viable precursors to allyl complexes. Migratory insertion of a diene into the M–H bond is a nice route to methyl-substituted allyl complexes, for example. Interestingly, analogous insertions of fulvenes do not appear to lead to Cp complexes, but some funky reductive couplings that yield ansa-metallocenes are known. External electrophilic attack (e.g., protonation) and nucleophilic attack on coordinated dienes also result in allyl complexes. In essence, one double bond of the diene becomes a part of the allyl ligand in the product; the other is used as a “handle” to establish the key covalent bond to the allyl ligand.

Dienes: brave crusaders in the quest for allyl complexes.

Since the Cp ligand is typically a spectator, we’ll focus in this section on the reactivity of allyl ligands. As usual, the behavior of the allyl ligand depends profoundly on the nature of its coordinated metal center, which depends in turn on the metal’s ancillary ligands. Avoid “tunnel vision” as you study the examples below—depending on the issue at hand, the ancillary ligands may be as important as (or more important than) the actor ligand.

In a conceptually related process, nucleophiles can attack allyl ligands bound to electrophilic metals. This process is key in allylic substitution reactions. In some cases, the nucleophile is known to bind to the metal first, then transfer to the allyl ligand through reductive elimination. Alternatively, direct attack on the allyl ligand may occur on the face opposite the metal. The figure below illustrates both possibilities.

External and internal attack of nucleophiles on coordinated allyl ligands.

Migratory insertion of allyl ligands is known, and is analogous to insertions involving alkyl ligands (see the figure below). Movement of the allyl ligand toward the coordination site of the dative ligand is assumed. Of course if oxidative addition to form allyl complexes is possible, reductive elimination of allyl ligands with other X-type ligands is also possible. We’ll hit on these process in more detail in their dedicated posts.

One final post on σ-complexes will bring this series to a temporary close. In the next post, we’ll look at ligands that, rather surprisingly, bind through their σ-electrons. These “non-classical” ligands behave like other dative ligands we’ve seen before, but are important for many reactions that involve main-group single bonds, such as oxidative addition. Before their discovery, the relevance of σ-ligands for reaction mechanisms went unappreciated by organometallic chemists.