This module was designed to give general information about Scandium, a transition metal element. Having some knowledge of the properties of Scandium provides for a better understanding of the production of items such as spacecraft and sports equipment, as well as providing for a better general understanding of Earth's elements.

Scandium was one of the elements predicted by Mendeleev in 1871 when he proposed his system for organizing the elements: the periodic table. At the time he called it ekaboron ("like boron") and suggested some of the physical and chemical properties it would have. The existence of scandium was confirmed only 8 years later by Lars Nilson. It is named for the Latin word for Scandinavia.

The metal is lightweight and fairly corrosion-resistant. It also has a high melting point and therefore finds applications in the aerospace industry. Scandium is widely distributed on the earth and has an abundance similar to cobalt and lithium. Most commercial scandium is obtained from the uranium refining process. 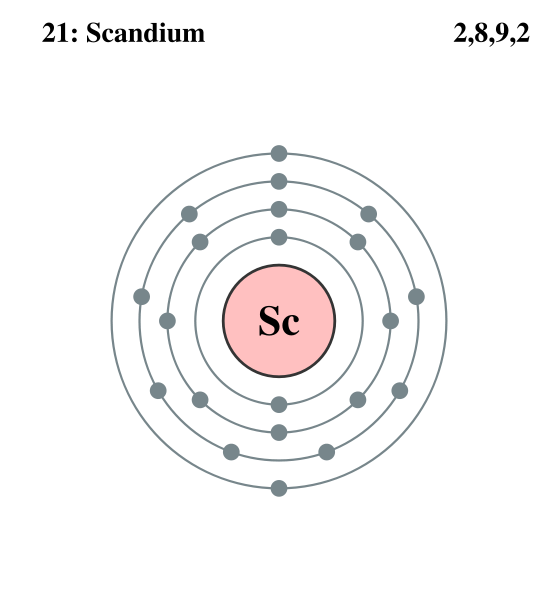 Scandium is a silver-white metal that develops a light yellow/pink cast when exposed to air. Scandium has a much higher melting point than aluminum, which is why it is of interest to spacecraft designers. Like other transition metals, it is susceptible to weathering and will slowly dissolve in dilute acids. As seen above, many of these examples substantiate the fact that Scandium's most common oxidation state is +3, with the +2 and +1 oxidation states being rarer but nonetheless possible.

Comparison with Other Transition Metals

Scandium works well with Aluminum, as can be seen when they're used together in sports equipment and aerospace components. Scandium has the lowest atomic mass out of the all of the transition metals, as well as the lowest density.