Whenever you put four (4) spheres together touching each other, you've got a tetrahedral arrangement of spheres. The space in the center is called a tetrahedral site. The octahedral site is formed by six spheres. These sites are also called holes in some literature, and they are shown in the diagrams above.

What is the radius of the largest sphere that can be placed in a tetrahedral hole without pushing the spheres apart?

Suggestion for Solution
To solve a problem of this type, we need to construct a model for the analysis. The following statement explicitly tells you how to construct such a model.

Use the diagram shown here as a starting point, and construct a tetrahedral arrangement by placing four spheres of radius R at alternate corners of a cube. Once complete, work out the following:

What is the radius of the largest sphere that can be placed in an octahedral hole without pushing the spheres apart?

When the cation radii are greater than or equal to 0.414 R, but less than 0.732 R, the cations occupy the octahedral sites. Sodium chloride is one such structure, and it serves as an important structure type.

The above discussion is summarized below:

Discussion
What is the radius of the largest sphere that can be placed in an octahedral hole without pushing the spheres apart?
(Answer: 0.731)

Is there a structure in which all the tetrahedral sites are occupied by a different type of atoms or ions?

Solution
The outline of a unit cell for \(\ce{PuO2}\) is shown here, and all the tetrahedral sites are occupied by small \(\ce{O^2-}\) ions. 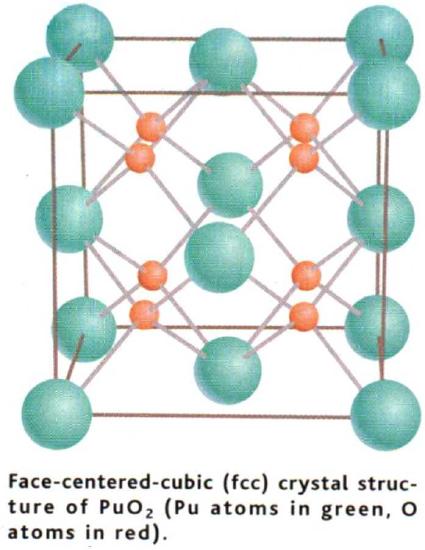