Stereoisomers are isomers that have the same molecular formula and ligands, but differ in the arrangement of those ligands in 3D space.

Isomers are molecules that have the same molecular formula but differ in the way the atoms are arranged around the central atom. For example, a molecule with the formula AB2C2, has two ways it can be drawn: The above two pictures are examples of isomers, specifically cis-trans isomers which we will discuss below. One thing to remember whenever talking about stereoisomers is that all other options that may come to mind are just rotations of the existing isomers. For example, a molecule that has both C's on the top right plane and both B's on the bottom left plane is not another isomer. Instead it is just a 180o rotation of isomer 2.

Stereoisomers are isomers that mainly differ in the way the ligands or atoms are placed relative to the central atom. There are two types of stereoisomers:

An example of linear geometry is provided below of the molecule Xenon Difluoride (XeF2). Recall that linear is the geometry where the molecule looks like a line.

Square planar is the geometry where the molecule looks like it is a square plane. An example of the molecule Xenon Tetrafluoride (XeF4) is provided below. Tetrahedral is the geometry where the molecule looks like a pyramid. An example of the molecule Methane (CH4) is provided below. Stereoisomers have a lot of applications in biology as well as our day to day lives. Surprisingly, our own tongue contains chiral molecules that help us discern the taste of some of the foods we eat. For example, we may eat two of the same leaves but one may taste bitter and the other may taste sweet because of chirality. As discussed above, optical isomers also have the ability to rotate light in certain directions. In biological terms, chirality is key to the proper functioning of an enzyme. This is because chirality allows the enzyme to function efficiently by being able to bind to only certain substrates. 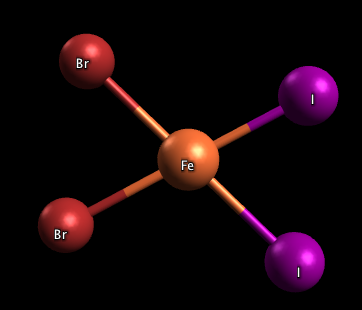 2) The molecule, FeBr2I2 pictured in problem 3 is a cis isomer, or cis-FeBr2I2, because both the Br and I ligands are on the same side. There is one more stereoisomer for this molecule: trans-FeBr2I2, pictured below: 5) In the molecule Fe(en)3, recall that the en ligand, ethylenediamine is a bidentate ligand. The 2D structure of this molecule is shown below: