Discovered in 1797 by the French chemist Louis Nicolas Vauquelin, it was named chromium (Greek chroma, "color") because of the many different colors characteristic of its compounds. Chromium is the earth's 21st most abundant element (about 122 ppm) and the 6th most abundant transition metal. The principal and commercially viable ore is chromite, \(\ce{FeCr2O4}\), which is found mainly in southern Africa (with 96% of the worlds reserves), the former U.S.S.R and the Philippines. Less common sources include crocoite, \(\ce{PbCrO4}\), and chrome ochre, \(\ce{Cr2O3}\), while the gemstones emerald and ruby owe their colors to traces of chromium.

Chromite (\(\ce{FeCr2O4}\)) is the most commercially useful ore, and is extensively used for extraction of chromium. Chromium is produced in two forms:

The main use of the chromium metal so produced is in the production of nonferrous alloys, the use of pure chromium being limited because of its low ductility at ordinary temperatures. Alternatively, the Cr2O3 can be dissolved in sulfuric acid to give the electrolyte used to produce the ubiquitous chromium-plating which is at once both protective and decorative. The sodium chromate produced in the isolation of chromium is itself the basis for the manufacture of all industrially important chromium chemicals. World production of chromite ores approached 12 million tonnes in 1995.

Most compounds of chromium are colored (why is Cr(CO)6 white?); the most important are the chromates and dichromates of sodium and potassium and the potassium and ammonium chrome alums. The dichromates are used as oxidizing agents in quantitative analysis, also in tanning leather. Other compounds are of industrial value; lead chromate is chrome yellow, a valued pigment. Chromium compounds are used in the textile industry as mordants, and by the aircraft and other industries for anodizing aluminium.

CrX3 are prepared from Cr with X2, dehydration of CrCl3.6H2O requires SOCl2 at 650C.

Hence the variation found for solutions of CrO3 are:

One of the most obvious characteristics of Cr(III) is that it is acidic i.e it has a tendency to hydrolyse and form polynuclear complexes containing OH- bridges in a process known as OLATION. This is thought to occur by the loss of a proton from coordinated water, followed by coordination of the OH- to a second cation:

The ease with which the proton is removed can be judged by the fact that the hexaaquo ion (pKa ~ 4) is almost as strong as acetic acid. Further deprotonation and polymerization can occur and, as the pH is raised, the final product is hydrated chromium(III) oxide or "chromic hydroxide".

The Chromium(III) ion forms many stable complexes and since they are inert are capable of exhibiting various types of isomerism. 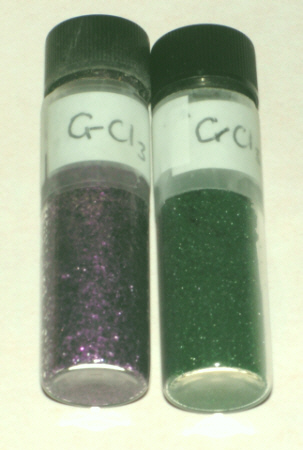 Anhydrous CrCl3 reacts with pyridine only in the presence of Zinc powder. This allows a small amount of the Cr(II) ion to be formed, which is very labile but unstable with respect to oxidation back to Cr(III).

See the laboratory manual for this course for a range of other Cr(III) complexes for which you should know the structure.

[Cr2(OAc)4].2H2O is an example of a Cr(II) complex which is reasonably stable in air once isolated. Each Cr(II) ion has 4 d electrons but the complex is found to be diamagnetic which is explained by the formation of a quadruple bond between the two metal ions. The Cr-Cr bond distance in a range of these quadruply bonded species has been found to vary between 195-255 pm. Cr(II) acetate complex.
In case you think that quadruple bonds are as far as it goes.... a recent report describes the structure of a Cr complex with a quintuple bond between two Cr(I) ions. More than half the production of chromium goes into metallic products, and about another third is used in refractories. It is an ingredient in several important catalysts. The chief use of chromium is to form alloys with iron, nickel, or cobalt. The addition of chromium imparts hardness, strength, and corrosion resistance to the alloy. In the stainless steels, chromium makes up 10 percent or more of the final composition. Because of its hardness, an alloy of chromium, cobalt, and tungsten is used for high-speed metal-cutting tools. When deposited electrolytically, chromium provides a hard, corrosion-resistant, lustrous finish. For this reason it is widely used as body trim on automobiles and other vehicles. The extensive use of chromite as a refractory is based on its high melting point, its moderate thermal expansion, and the stability of its crystalline structure.

In chromites and chromic salts, chromium has a valence of +3. Most of these compounds are green, but some are red or blue. Chromic oxide (Cr2O3) is a green solid. In chromates and dichromates, chromium has a valence of +6. Potassium dichromate (K2Cr2O7) is a red, water-soluble solid that, mixed with gelatin, gives a light-sensitive surface useful in photographic processes. The chromates are generally yellow, the best known being lead chromate (PbCrO4), an insoluble solid widely used as a pigment called chrome yellow. Chrome green is a mixture of chrome yellow and Prussian blue.

Chromium is used to harden steel, to manufacture stainless steel, and to form many useful alloys. Much is used in plating to produce a hard, beautiful surface and to prevent corrosion. Chromium gives glass an emerald green color and is widely used as a catalyst. The refractory industry has found chromite useful for forming bricks and shapes, as it has a high melting point, moderate thermal expansion, and stability of crystalline structure.

Chromium is an essential trace element in mammalian metabolism. In addition to insulin, it is responsible for reducing blood glucose levels, and is used to control certain cases of diabetes. It has also been found to reduce blood cholesterol levels by diminishing the concentration of (bad) low density lipoproteins "LDLs" in the blood. It is supplied in a variety of foods such as Brewer's yeast, liver, cheese, whole grain breads and cereals, and broccoli. It is claimed to aid in muscle development, and as such dietary supplements containing chromium picolinate (its most soluble form), is very popular with body builders.

mer- isomer of Cr(III) picolinate complex.
Ammonium Reineckate, NH4(Cr(NH3)2(SCN)4).H 2O, is used to test for the presence of dihydromorphinone and other substances generally found in persons involved in substance abuse.