Ozone is colourless or slightly bluish gas (blue when liquified), slightly soluble in water and much more soluble in inert non-polar solvents such as carbon tetrachloride or fluorocarbons, where it forms a blue solution. At 161 K (-112 °C), it condenses to form a dark blue liquid. It is dangerous to allow this liquid to warm to its boiling point, because both concentrated gaseous ozone and liquid ozone can detonate.

Most people can detect about 0.01 μmol/mol of ozone in air where it has a very specific sharp odour somewhat resembling chlorine bleach. Exposure of 0.1 to 1 μmol/mol produces headaches, burning eyes and irritation to the respiratory passages. Even low concentrations of ozone in air are very destructive to organic materials such as latex, plastics and animal lung tissue.

Seaside air was once considered to be healthy because of its "ozone" content. It is now recognised that the smell in reality is released from bacteria following the breakdown of species from rotting seaweed! (dimethyl sulfoxide, DMS). Birds appear to be attracted to the smell since for them it indicates a plankton bloom, and therefore the presence of fish feeding on the marine plants.

Ozone may be formed from O2 by electrical discharges and by action of high energy electromagnetic radiation. Unsuppressed arcing breaks down the chemical bonds of the atmospheric oxygen surrounding the contacts [O2 → 2O]. Free radicals of oxygen in and around the arc recombine to create ozone [O3]. Certain electrical equipment generate significant levels of ozone. This is especially true of devices using high voltages, such as ionic air purifiers, laser printers, photocopiers, tasers and arc welders. Electric motors using brushes can generate ozone from repeated sparking inside the unit. Large motors that use brushes, such as those used by elevators or hydraulic pumps, will generate more ozone than smaller motors. Ozone is similarly formed in the Catatumbo lightning storms phenomenon on the Catatumbo River in Venezuela, which helps to replenish ozone in the upper troposphere. It is the world's largest single natural generator of ozone. The lightning originates from a mass of storm clouds at a height of more than 5 km, and occurs during 140 to 160 nights a year, 10 hours per day and up to 280 times per hour. 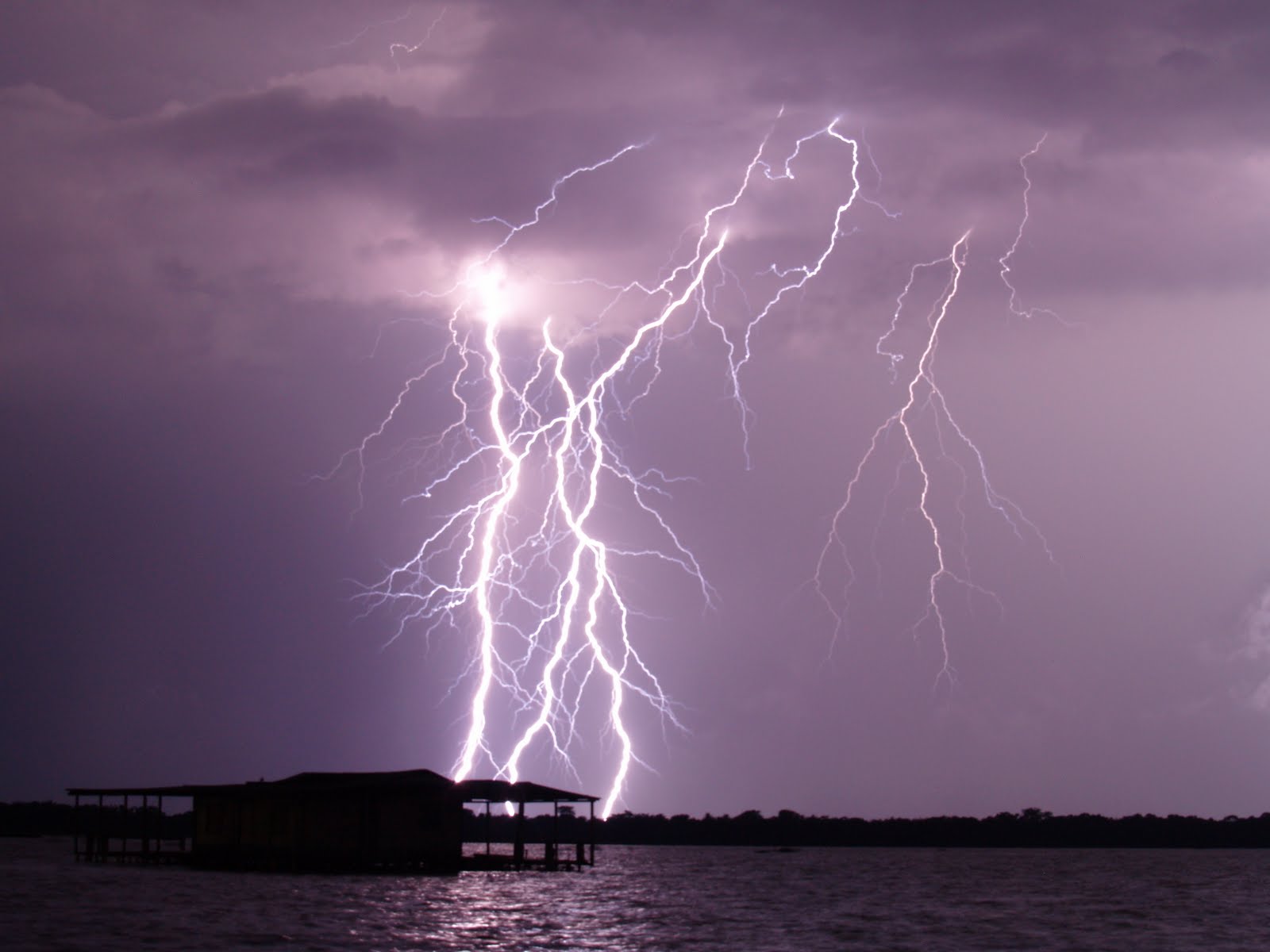 Ninety percent of the ozone in the atmosphere sits in the stratosphere, the layer of atmosphere between about 10 and 50 kilometers altitude. The ozone layer is mainly found in the lower portion of the stratosphere, from approximately 20 to 30 kilometres (12 to 19 mi) above Earth, though the thickness varies seasonally and geographically. Here the concentration of O3 varies from two to eight ppm which is much larger than the average ozone concentration in the Earth's atmosphere which is only about 0.3 parts per million.

The natural level of ozone in the stratosphere can be considered to be a result of a balance between sunlight that creates ozone and chemical reactions that destroy it.

Creation: photolysis of an oxygen molecule by high energy UV light splits it into two oxygen atoms. The wavelength in the UV needed to achieve this can be estimated from the O=O Bond Energy of 498 kJmol-1.
By dividing this by 6.022 * 1023 bonds/mol the Energy per bond is found to be 8.27 * 10-19 J/bond.
The wavelength required for photolysis can be evaluated from E= hc / λ

Each oxygen atom then rapidly combines with an oxygen molecule to form an ozone molecule:

The atomic oxygen produced quickly reacts with another oxygen molecule to reform ozone:

where "K.E." denotes the excess energy of the reaction which is manifested as extra kinetic energy. These two reactions form the ozone-oxygen cycle, in which the chemical energy released when O and O2 combine is converted into kinetic energy of molecular motion. The overall effect is to convert penetrating UV-B light into heat, without any net loss of ozone. This cycle keeps the ozone layer in a stable balance while absorbing 97-99% of the Sun's medium-frequency ultraviolet light (from about 200 nm to 315 nm wavelength) and preventing it from reaching the Earth's surface, to the benefit of both plants and animals. This reaction is one of two major sources of heat in the stratosphere (the other being the kinetic energy released when O2 is photolyzed into O atoms).

Removal: reaction of an oxygen atom with an ozone molecule leads to production of two oxygen molecules:

and if two oxygen atoms meet, they can react to form one oxygen molecule:

The overall amount of ozone in the stratosphere is determined by a balance between production by solar radiation and removal. The removal rate is slow, since the concentration of O atoms is very low. Certain free radicals, the most important being hydroxyl (OH), nitric oxide (NO) and atoms of chlorine (Cl) and bromine (Br), catalyze the recombination reaction, leading to an ozone layer that is thinner than it would be if the catalysts were not present.

Most of the OH and NO are naturally present in the stratosphere, but human activity, especially emissions of chlorofluorocarbons (CFCs) and halons, has greatly increased the Cl and Br concentrations, leading to ozone depletion. Each Cl or Br atom can catalyze tens of thousands of decomposition reactions before it is removed from the stratosphere.

Ozone depletion describes two distinct but related phenomena observed since the late 1970s: a steady decline of about 4% per decade in the total volume of ozone in the ozone layer, and a much larger springtime decrease in stratospheric ozone over Earth's polar regions. Note that the Antarctic would be in darkness (no sunshine) for the winter months, sunshine returning in springtime (September). The latter phenomenon is referred to as the ozone hole.

The most important process in depletion is catalytic destruction of ozone by atomic halogens. The main source of these halogen atoms in the stratosphere is photodissociation of man-made halocarbon refrigerants, solvents, propellants, and foam-blowing agents (CFCs, HCFCs, freons, halons), substances that are referred to as ozone-depleting substances (ODS).

In the simplest example of such a cycle, a chlorine atom reacts with an ozone molecule, taking an oxygen atom with it (forming ClO) and leaving a normal oxygen molecule. The chlorine monoxide (ClO) produced can react with a second molecule of ozone to yield another chlorine atom and two molecules of oxygen. These gas-phase reactions can be written such that in the first step a chlorine atom changes an ozone molecule to ordinary oxygen:

The ClO generated can then destroy a second ozone molecule and recreate the original chlorine atom, which can repeat the first reaction and continue a cycle to destroy ozone.

ClO + O3 → Cl. + 2 O2
In theory, a single chlorine atom could keep on destroying ozone (acting as a catalyst) for up to two years (the time scale for transport back down to the troposphere) were it not for reactions that remove Cl by forming reservoir species such as hydrogen chloride (HCl). In practise, the average chlorine atom reacts with 100,000 ozone molecules before it is removed from the catalytic cycle.

On a per atom basis, bromine is even more efficient than chlorine at destroying ozone, but at present there is much less bromine in the atmosphere. Both chlorine and bromine significantly contribute to the overall depletion of ozone.

The Montreal Protocol on Substances that Deplete the Ozone Layer (a protocol to the Vienna Convention for the Protection of the Ozone Layer) is an international treaty designed to protect the ozone layer by phasing out the production of numerous substances that are responsible for ozone depletion. It was agreed on in 1987, and entered into force on January 1, 1989, with numerous revisions since then.

The bans on the production of CFCs, halons, and other ozone-depleting chemicals such as carbon tetrachloride and trichloroethane have led to the expectation of a recovery of the ozone layer to 1980 values somewhere between 2050 and 2070. This was the estimate given in a summary document of the Scientific Assessment of the Ozone Depletion 2014 published by the UN Environment Programme (UNEP) and the UN World Meterological Organization (WMO).

Among the key findings of the report were that the authors noted that what happens after 2050 will then largely depend on concentrations of CO2, methane and nitrous oxide - the three main long-lived greenhouse gases in the atmosphere. 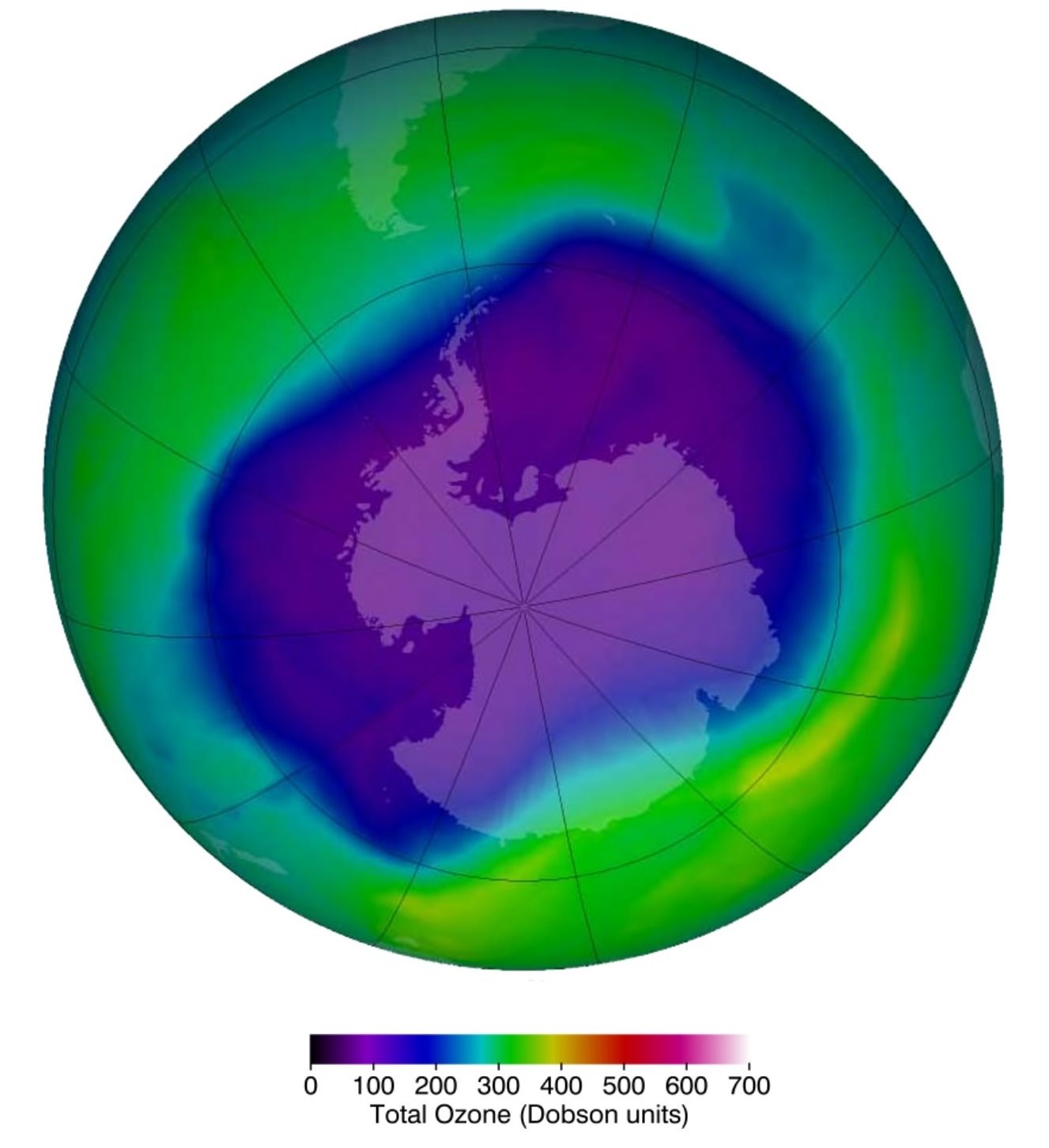 NASA view of the largest ozone hole observed above the Antarctic on 24 Sep 2006.
Ozone is much less stable than the diatomic allotrope O2, breaking down in the lower atmosphere to normal dioxygen. The O - O distances in O3 are 127.2 pm and the O - O - O angle is 116.78°. The bonding can be expressed as a resonance hybrid with a single bond on one side and double bond on the other producing an overall average bond order of 1.5 for each side.

Ozone is a powerful oxidant (far more so than dioxygen) and has many industrial and consumer applications related to oxidation. This same high oxidizing potential, however, causes ozone to damage mucous and respiratory tissues in animals, and also tissues in plants, above concentrations of about 100 ppb. This makes ozone a potent respiratory hazard and pollutant near ground level.

This reaction is accompanied by chemiluminescence. The NO2 can be further oxidized:

The NO3 formed can react with NO2 to form N2O5.

Ozone does not react with ammonium salts, but it oxidizes ammonia to ammonium nitrate:

On increasing the pressure of dioxygen at room temperature, the "solid oxygen β-phase" undergoes phase transitions to the δ-phase at 9 GPa and the ε-phase at 10 GPa. Its volume decreases significantly, and it changes colour from blue to deep red. The structure of this red ε-phase, determined in 2006, is based on an O8 cluster (see structure above). It was confirmed that this structure is formed up to 96 GPa. The box-like cluster is an unusual conformation first recognised for oxygen, and as yet has not been experimentally or theoretically reported for any other diatomic molecule.

Liquid oxygen is already used as an oxidant in rockets, and it has been speculated that red oxygen could make an even better oxidant, because of its higher energy density.