For example, instead of a hydrogen electrode, we might use a fluorine electrode, in which we have fluoride salts and fluorine gas in solution with a platinum electrode. (Maybe we just don't think working with hydrogen is dangerous enough.)

The "reduction potentials" we measure would all be relative to this reaction now. They would tell us: how much more motivated is this ion to gain an electron than fluorine?

The trouble is, there isn't much out there that would be more motivated than fluorine to gain an electron. All of the potentials in the table are negative because none of the species on the left could take an electron away from fluoride ion. However, if we turned each of these reactions around, the potentials would all become positive. That means gold, for instance, could give an electron to fluorine to become Au(I). This electron transfer would be spontaneous, and a voltmeter in the circuit between the gold electrode and the fluorine electrode would measure a voltage of 1.04 V.

That potential is generated by the reaction:

Notice that, because 2 electrons are needed to reduce the fluorine to fluoride, and because gold only supplies one electron, two atoms of gold would be needed to supply enough electrons.

The reduction potentials in the table are, indirectly, an index of differences in electronic energy levels. The electron on gold is at a higher energy level than if it were on fluoride. It is thus motivated to spontaneously transfer to the fluorine atom, generating a potential in the circuit of 1.04V.

Silver metal is even more motivated to donate an electron to fluorine. An electron from silver can "fall" even further than an electron from gold, to a lower energy level on fluoride. The potential in that case would be 2.074 V.

There are a couple of things to note here. The first is that, if potential is an index of the relative energy level of an electron, it doesn't matter whether one electron or two is transferred. They are transferred from the same, first energy level to the same, second energy level. The distance that the electron falls is the same regardless of the number of electrons that fall. A reduction potential reflects an inherent property of the material and does not depend on how many electrons are being transferred.

Frequently in biology, electron transfers are made more efficient through a series of smaller drops rather than one big jump. To think about this, consider the transfer of an electron from lithium to fluorine. (Neither of these species is likely to be found in an organism, but this transfer is a good illustration of a big energy difference.)

e) This scheme would result in the release of a small amount of energy at each stage. Each step could be harnessed to perform a task more efficiently, with less heat loss.

An "activity series" is a ranking of elements in terms of their "activity" or their ability to provide electrons. The series is normally written in a column, with the strongest reducing metals at the top. Beside these elements, we write the ion produced when the metal loses its electron(s). Looking at the table of reduction potentials relative to fluorine on this page, construct an activity series for the available elements.

In reality, the energy gap that leads to a reduction potential is sometimes more complicated than following an electron as it moves from one level to another. Use the activity series you have constructed for the alkali metals to compare and contrast the redox potential with your expectations of energy level / ease of electron donation based on standard periodic trends. 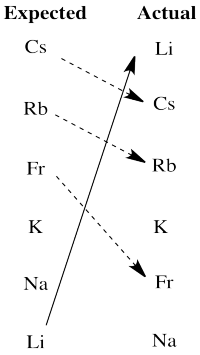 We will see that another factor the influences activity in redox is the stability of ions in aqueous solution. Lithium cation is a small ion; water molecules bind very strongly to the ion because the electrons get relatively close to lithium's nucleus. That strong binding stabilizes this ion especially, tipping the malance of the reaction more strongly towards oxidation of lithium. The larger alkali metal ions are not nearly as stabilized by water ligands in aqueous solution, so the balance of their reactions does not tilt as strongly towards aqueous ions.