An acid-base extraction is a type of liquid-liquid extraction. It typically involves different solubility levels in water and an organic solvent. The organic solvent may be any carbon-based liquid that does not dissolve very well in water; common ones are ether, ethyl acetate, or dichloromethane.

Suppose you have a mixture of two compounds. There is a neutral one which does not react with any acids or bases. There is also a basic one, which reacts with acids by picking up a proton.

In this case, a proton might be added via reaction with a strong mineral acid (represented by HX in the drawing). Suppose an aqueous solution of mineral acid, such as HCl, were shaken vigorously with an ethereal solution of an organic base and an organic neutral. The proton would be transferred to a basic compound, but not to a neutral one. The basic compound would become ionic, and more water-soluble.

Note that in the drawing, the ether is represented in yellow, whereas the water is shown in blue. The water is on the bottom in this case because water has a higher density than ether, so it will sink to the bottom (along with anything dissolved in it). Some organic solvents do have a higher density than water, so the aqueous solution would float to the top in those case.

However, as a practical matter, the ether would have to be dried first. What's the difference between evaporating and drying? Have you ever been to the beach or taken a shower? Drying refers to the removal of water. This step is necessary because ether tends to dissolve a lot of water in it. Once the ether has been evaporated, there would be some neutral compound, but it would be mixed with water.

Water removal is most easily done by adding a drying agent, such as magnesium sulfate or sodium sulfate. The water sticks to these solids, which are then filtered off.

However, the basic compound is stuck in the water, and it isn't the same compound anymore. It's an ion, now. If we want the original compound in a pure form, we need to take that proton away. That can be done by adding a mineral base, such as sodium hydroxide.

The mineral base will remove the proton, leaving the original organic compound. The organic compound is uncharged and not as soluble in water anymore. It will go back into the ether layer.

Conversely, we might have a mixture of an acidic organic compound and a neutral compound to start out with. In that case, we would add a mineral base in the first place, to take a proton away from the acidic compound. The mineral base might be something like sodium hydroxide or sodium bicarbonate. In the drawing, it is just represented as Na+ B-.

The acidic compound becomes ionic and water-soluble when it loses a proton. That leaves the neutral compound alone.

To get that acidic compound back, we would add a mineral acid such as hydrochloric acid in order to restore the missing proton.

Just as in the other case, the ether layer containing a pure compound could be separated, dried and evaporated in order to provide the pure compound.

But how do we know whether something is an organic acid or a base? Common structural features of organic acids and bases are displayed below.

Note that the terms, "strong acid" and "weak acid", are relative. Sometimes, the term, "strong acid", designates a compound that completely ionizes in solution, so that it automatically gives up a H+ ion and forms an ionic compound. Hydrochloric acid, HCl, in water is a good example. That isn't true here; none of these acids ionize very easily on their own, and they appear in solution just as they do above, with just a small minority of molecules forming H+ and an anion. In this case, the term just compares one group of acidic compounds (called carboxylic acids) to another group of acidic compounds (called phenols). Carboxylic acids are more likely to give up protons than are phenols, so carboxylic acids are referred to in this context as "strong" and phenols as "weak".

The carboxylic acid group contains a C=O (a carbonyl) with an additional OH group attached to the carbon. Examples are shown below.

When carboxylic acids are treated with mineral bases such as sodium hydroxide, the carboxylic OH group gives up a proton to the hydroxide, forming a water molecule. The electrons in the O-H bond stay behind, putting a negative charge on the resulting carboxylate anion. The salt that forms is much more water soluble.

This reaction is completely reversible. A mineral acid, such as HCl, could provide protons to the carboxylate anion. The carboxylate ion would use a pair of electrons to bind to a proton, and the compound would become a neutral (as in uncharged) carboxylic acid again.

Phenols also contain an OH group, but instead of being attached to a C=O group, the OH is attached to a benzene (a six-carbon ring with three double bonds). Examples are shown below.

Phenols react with bases in the same way as do carboxylic acids. They just don't do so as easily.

Because phenols do not react as easily as carboxylic acids, there are situations in which a carboxylic acid would react with a base but a phenol would not. For example, carboxylic acids react even with weak bases such as sodium bicarbonate (baking soda).

Phenols, on the other hand, do no such thing.

If the OH is attached to a carbon in an organic compound, but it is not attached to either a C=O or a benzene ring, it is not acidic enough to be removed to an appreciable extent. That is true even if there is a carbonyl or a benzene somewhere else in the molecule. As a result, acid-base extraction is not possible in these cases.

Organic bases are compounds that contain nitrogen atoms. In order to be basic, the nitrogen atom must have a lone pair. The lone pair is needed in order to make a bond with the proton.

Once the lone pair has donated to the proton to form a bond with it, the nitrogen compound becomes positively charged. It then becomes more water-soluble.

If the following mixtures were taken up in ether and 1 M sodium hydroxide, indicate which compound would be found in each solvent. 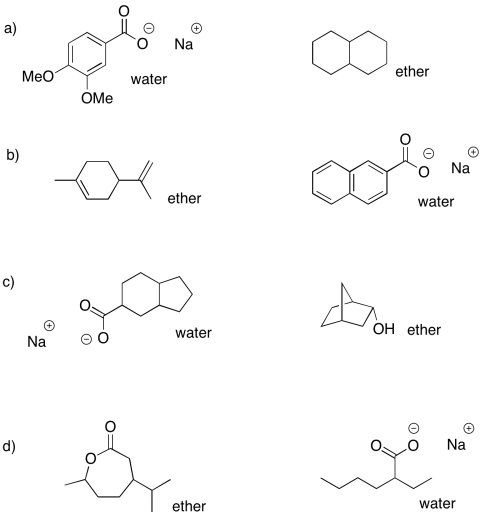 If the following mixtures were taken up in ether and 1 M hydrochloric acid, indicate which compound would be found in each solvent. If the following mixtures were taken up in ether and 1 M sodium bicarbonate, indicate which compound would be found in each solvent. Indicate what compounds would be found in each solvent in the following cases.

Indicate what compounds would be found in each layer (top or bottom) in the following cases.