One of the most complicated problems in lab is to deal with the analysis of a mixture. This situation is not uncommon when students run experiments in lab and analyse the data. For example, a student may have added a solvent as part of a purification procedure. Maybe the sample was recrystallized from methanol. Maybe the sample was purified by solvent extraction, and it still contains a little moisture from when it was exposed to the water. In these cases, the solvent will show up in the NMR spectrum.

As you go through a spectrum, you should think about any solvents the sample may have contacted. Look for evidence of those things in the spectrum, too.

Here are some examples of solvents that might be used in the lab. You can probably think of other ones, too. 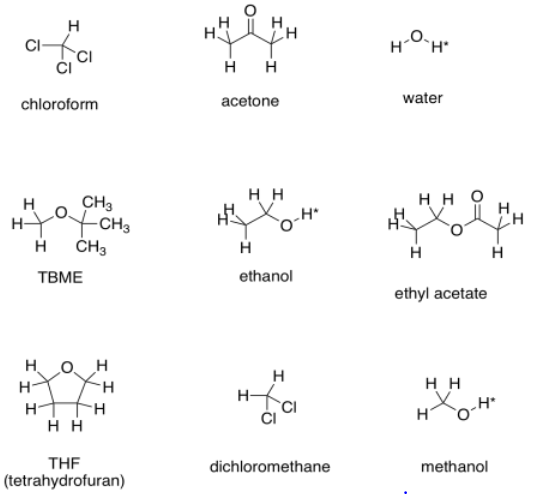 The asterisks by the OH protons in these solvents indicate that these are "exchangeable positions". In protic solvents, or solvents capable of hydrogen bonding (any compound containing O-H or N-H bonds), the proton attached to the oxygen or nitrogen has some unusual behavior in the NMR spectrum. We do not usually observe multiplicity in peaks corresponding to these protons. Often the peaks are very broad, and sometimes they are missing altogether (especially if there is moisture in the sample).

See if you can predict what the NMR spetra of these solvents would look like.

Let's look at an example. Maybe you worked with a sample of p-chlorobenzaldehyde in the lab. You think you know what that would look like in the NMR. All of the hydrogens are attached to sp2 or trigonal planar carbons. They should all be somewhere in the left half of the spectrum, maybe between 5 and 10 ppm. Some of the hydrogens are symmetrically equivalent. There is a pair of hydrogens on the benzene ring that look the same as each other; they are closer to the chlorine. Another pair is closer to the carbonyl, the C=O unit. We expect to see two peaks in the NMR spectrum for these hydrogens, even though there are a total of four of them, because they are only in two groups. Because they are all on a benzene, we might even look closer to 7 ppm in the spectrum. Also, both sets of hydrogens have just one neighbour that is different from themselves. These hydrogens should both show up as doublets.

That's not all of the hydrogens in the molecule. There is also a hydrogen on the carbonyl. Because of the double bond to the electronegative oxygen, this position will be strongly deshielded. We should look for it closer to 10 ppm. It does not have any hydrogen neighbors, though. We expect to see a singlet.

The spectrum we see has all of those features. Note that this spectrum is integrated (the area of each peak has been measured), and it shows the peak at 10 ppm corresponds to 1H, whereas the ones closer to 7 ppm correspond to 2H each. That information corresponds to what we see in the structure.

But we see other things, too. Maybe we know that the compound was once dissolved in TBME, (CH3)3COCH3. All of the TBME probably evaporated, but you can never be too sure.

Furthermore, there are only 3 hydrogens on the carbon next to the oxygen in TBME. There are 9 hydrogens on the methyl groups attached to the carbon. They are in a 1:3 ratio, so we should see that ratio reflected in the integration in the NMR.

There is one more peak in the spectrum, and it is an impurity of a sort, but it isn't part of the original sample. The singlet around 7 ppm is just chloroform, CHCl3.

Now, the NMR solvent used here is actually deuterochloroform, CDCl3. The heavy isotope of hydrogen, deuterium or 2H, is used in this solvent. That's because we don't want the protons in the solvent to get in the way. 2H shows up in a completely different area of the spectrum than 1H, so it's invisible in a regular 1H NMR spectrum. There is an awful lot of solvent in the NMR tube, and a tiny amount of the actual sample, and it has to be that way for the experiment to work. However, if we just used CHCl3 as the solvent, we would see only one peak in the NMR spectrum: the CHCl3 hydrogen. The sample we are interested in would show up, maybe, as tiny, tiny peaks. So instead we use CDCl3, which is invisible in the hydrogen spectrum.

Well, deuterated solvents are very, very expensive, and the cost to make sure all of the hydrogen atoms in chloroform are replaced by deuteria would be prohibitive. So there is always a little bit of CHCl3 still in the CDCl3, and it shows up in the 1H spectrum.

It's helpful to have a list of common solvent impurities on hand when you look at your spectrum. A few examples are provided in the following table, showing the data you would see from common solvents in an NMR spectrum taken in chloroform.

Note that these compounds would show up at slightly different places if they were dissolved in something other than chloroform. Gottlieb's table lists where they would be seen in other common NMR solvents as well.

Each of the following spectra contains a solvent impurity: acetone, ethyl acetate, methanol, TBME, or THF. Match the spectrum to the impurity. 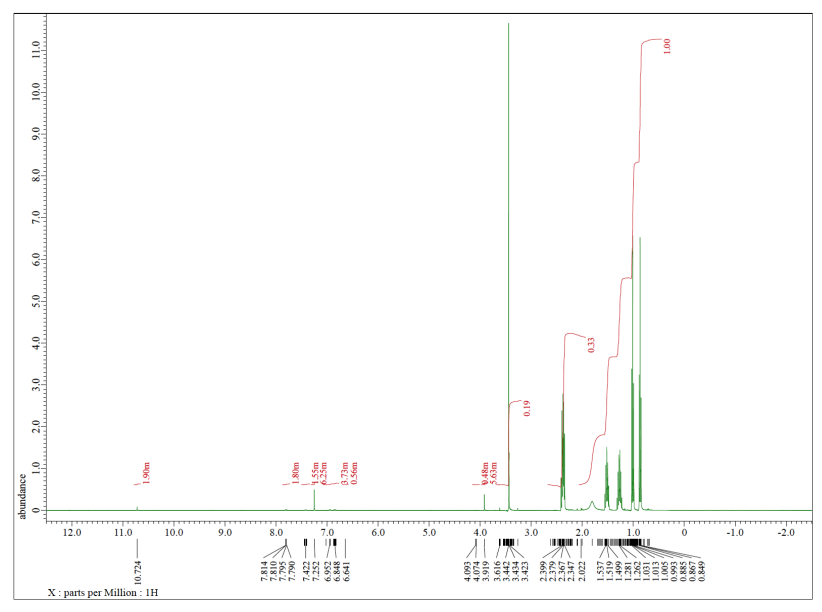