b) Place the gallium ions in half of the tetrahedral holes.

c) Shade one kind of atom in and add a legend to your diagram.

d) Calculate the total number of arsenic atoms in the unit cell.

e) Calculate the total number of gallium atoms in the unit cell.

f) What is the formula of gallium arsenide, based on that ratio?

g) What would be the charge on each ion, based on its location in the periodic table?

h) The melting point of gallium arsenide would be (higher / lower) than CsI.

i) In reality, both ions have much less charge than expected. Why isn’t gallium arsenide fully ionic? Arsenic is to the right of gallium in the periodic table, so arsenic must be more electronegative; it must be the anion, and gallium the cation.

Arsenic is three atoms from the right edge of the periodic table; as an ion, a 3- charge makes sense. To balance the charge, gallium must have a 3+ charge.

The atoms are so close together in the periodic table that it isn't likely that arsenic should completely steal three electrons away from gallium; the difference in electronegativity isn't great enough.

Electronic devices rely on an interface between copper, a conductor of electricity, and silicon, a semiconductor. However, copper atoms tend to diffuse through silicon, disrupting its semiconductor properties. A barrier layer is therefore used in between, usually magnesium oxide or titanium nitride. Let's take a look at the structure of these materials.

d) Add the atoms to the figure according to the legend.

e) Calculate how many atoms of each kind there are in the cell.

f) What is the electronic configuration of a Mg atom (you can use noble gas abbreviation)?

g) What is the electronic configuration of a Mg ion in magnesium oxide?

h) Which is bigger: magnesium, or magnesium ion? Why?

i) What is the electronic configuration of an oxide ion in magnesium oxide?

j) Which is bigger: oxide ion, or magnesium ion? Why?

Alternatively, sometimes titanium nitride (TiN) is used as the barrier layer instead of magnesium oxide.

k) Based on its position in the periodic table, what is the charge on nitride ion in titanium nitride?

l) Therefore, what is the charge on titanium in titanium nitride?

Titanium nitride, like magnesum oxide, adopts a rock salt structure. It has a melting point that is a little higher than that of magnesium oxide (2 930 oC vs. 2 852 oC).

In the structure of silicon, imagine a face-centered cubic cell, but with extra silicon atoms that occupy half of the tetrahedral holes.

n) Add the atoms to the figure to show the structure of silicon.

o) What is the coordination number of a silicon in a tetrahedral hole?

p) Add the atoms to the figure to form body-centered cubic copper.

r) Explain why copper is a good conductor of electricity. Add a picture to support your explanation.

s) Why isn’t silicon as good a conductor of electricity as copper? 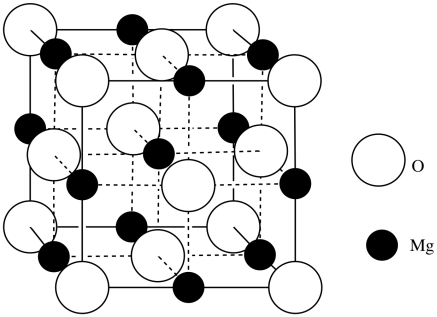 magnesium; the positive charge on the ion causes the remaining electrons to contract

oxide; they have the same electron configuration, but magnesium has more protons in its nucleus to attract the electrons.

The higher charge on the ions in TiN would lead to a higher force of attraction between the ions, and thus a higher lattice energy would be required to remove ions from the lattice. That attraction thus lowers the mobility of the ions, so the compound does not melt as easily. However, the fact that both Ti3+ and N3- are slightly larger than Mg2+ and O2- helps explain why the melting points are not extremely different; Coulomb's Law says that the increased attraction of the higher charges should be partly offset by the greater size of the ions. 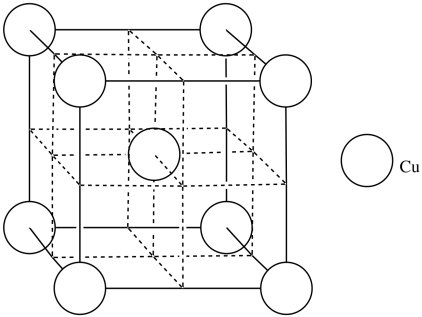 [Ar]4s13d10 (remember, this is one of those cases in which the 3d level is slightly below the 4s level)

Copper's low electronegativity allows it to form an electron sea model of metallic bonding. Copper ions are surrounded by the loosely-held electrons that are allowed to flow through the material.

Silicon is too electronegative to form an electron sea structure like a metal.