As shown in Figure \(\PageIndex{1}\), the individual water molecule consists of two hydrogen atoms bonded to an oxygen atom in a bent (V-shaped) structure. As is typical of group 16 elements, the oxygen atom in each O–H covalent bond attracts electrons more strongly than the hydrogen atom does. Consequently, the oxygen and hydrogen nuclei do not equally share electrons. Instead, hydrogen atoms are electron poor compared with a neutral hydrogen atom and have a partial positive charge, which is indicated by δ+. The oxygen atom, in contrast, is more electron rich than a neutral oxygen atom, so it has a partial negative charge. This charge must be twice as large as the partial positive charge on each hydrogen for the molecule to have a net charge of zero. Thus its charge is indicated by 2δ−. This unequal distribution of charge creates a polar bond(Figure \(\PageIndex{1}\) ). Because of the arrangement of polar bonds in a water molecule, water is described as a polar substance. Because of the asymmetric charge distribution in the water molecule, adjacent water molecules are held together by attractive electrostatic (δ+…δ−) interactions between the partially negatively charged oxygen atom of one molecule and the partially positively charged hydrogen atoms of adjacent molecules \(\PageIndex{2}\). Energy is needed to overcome these electrostatic attractions. In fact, without them, water would evaporate at a much lower temperature, and neither Earth’s oceans nor we would exist!

As you learned in Section 2.3, ionic compounds such as sodium chloride (NaCl) are also held together by electrostatic interactions—in this case, between oppositely charged ions in the highly ordered solid, where each ion is surrounded by ions of the opposite charge in a fixed arrangement. In contrast to an ionic solid, the structure of liquid water is not completely ordered because the interactions between molecules in a liquid are constantly breaking and reforming.

Figure \(\PageIndex{3}\) The Dissolution of Sodium Chloride in Water An electrolyte is any compound that can form ions when it dissolves in water. When strong electrolytes dissolve, the constituent ions dissociate completely due to strong electrostatic interactions with the solvent, producing aqueous solutions that conduct electricity very well (Figure \(\PageIndex{4}\)). Examples include ionic compounds such as barium chloride (BaCl2) and sodium hydroxide (NaOH), which are both strong electrolytes and dissociate as follows:

When weak electrolytes dissolve, they produce relatively few ions in solution. This does not mean that the compounds do not dissolve readily in water; many weak electrolytes contain polar bonds and are therefore very soluble in a polar solvent such as water. They do not completely dissociate to form ions, however, because of their weaker electrostatic interactions with the solvent. Because very few of the dissolved particles are ions, aqueous solutions of weak electrolytes do not conduct electricity as well as solutions of strong electrolytes. One such compound is acetic acid (CH3CO2H), which contains the –CO2H unit. Although it is soluble in water, it is a weak acid and therefore also a weak electrolyte. Similarly, ammonia (NH3) is a weak base and therefore a weak electrolyte. The behavior of weak acids and weak bases will be described in more detail when we discuss acid–base reactions in Section 8.6 .

Nonelectrolytes A substance that dissolves in water to form neutral molecules and has essentially no effect on electrical conductivity. that dissolve in water do so as neutral molecules and thus have essentially no effect on conductivity. Examples of nonelectrolytes that are very soluble in water but that are essentially nonconductive are ethanol, ethylene glycol, glucose, and sucrose, all of which contain the –OH group that is characteristic of alcohols. In Section 8.6, we will discuss why alcohols and carboxylic acids behave differently in aqueous solution; for now, however, you can simply look for the presence of the –OH and –CO2H groups when trying to predict whether a substance is a strong electrolyte, a weak electrolyte, or a nonelectrolyte. In addition to alcohols, two other classes of organic compounds that are nonelectrolytes are aldehydesA class of organic compounds that has the general form RCHO, in which the carbon atom of the carbonyl group is bonded to a hydrogen atom and an R group. The R group may be either another hydrogen atom or an alkyl group (c.f. ketone). and ketones). The alkyl groups may be the same or different., whose general structures are shown here. The distinctions between soluble and insoluble substances and between strong, weak, and nonelectrolytes are illustrated in Figure \(\PageIndex{5}\) . 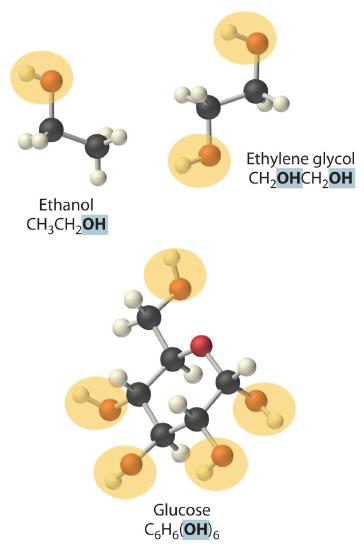 Figure \(\PageIndex{5}\) The Difference between Soluble and Insoluble Compounds (a) and Strong, Weak, and Nonelectrolytes (b)