Pure Covalent Bonds are those in which electrons are shared equally between the two atoms involved, as we saw earlier, where the iodine molecule was given as an example: Electrostatic surface map for I2

It was also shown that replacing an I atom with a group I metal decreased the covalent nature of the bond, while increasing its percent ionic character. The molecule is changed from a poisonous and bactericidal substance to salt-like white crystalline solids which may be more or less toxic depending on the particular metal chosen. IWC replica Réplica de reloj

But replacing one I atom in the purple solid I2 with another nonmetal also makes a significant difference. Replacing one of the iodine atoms with a hydrogen atom to make HI (hydrogen iodide) changes the chemistry significantly. HI is a colorless gas, and reacts with NaOH to give sodium iodide (used in iodized salt). Aqueous solution of HI are called hydroiodic acid, because HI dissolves extensively and readily in water to make acidic solutions by increasing the hydrogen ion (H+) concentration, while I2 is barely soluble in water. The polarity of the bond clearly has biological significance.

The Jmol model and electrostatic potential surfaces differ from those of I2 in several ways. Charge is no longer equally distributed between the atoms; the I atom has an excess of about 0.05 electrons, on the average, over the number of electrons in the neutral atom, so it has a charge of -0.05e. Even with electron shielding, the highly positive iodine nucleus pulls electrons toward itself more than the single proton of the hydrogen nucleus attracts electrons. The H atom has lost 0.05 of an electron, so it has an electrostatic charge of +0.05 e. The molecule has two electrical "poles", and is called a dipole. The bond, in which electrons are not equally shared, is called a polar covalent bond. 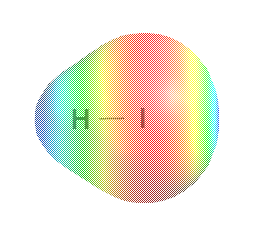 In the H—I bond the I has an excess of 0.05 electrons and hence has a negative charge. This situation is often indicated as follows:

The Greek letter δ (delta) is used here to indicate that electron transfer is not complete and that some sharing takes place. If the transfer had been complete, δ would have been 1.0. Because the Li—H bond is only partially negative at the one end and partially positive at the other, we often say that the bond is polar or polar covalent, rather than 100 percent ionic.

Elements in the upper right of the periodic table, which are small because the large nucleus contracts the valence shell, form much more polar bonds with H. For example, HF has a δ value of 0.43, compared with δ = 0.05 for HI.

Lets see how to calculate the δ value for HI. The data for this example could be obtained from the Jmol model above, but there are a number of different methods for calculating charges, and the one used here may not be appropriate for this calculation. Nonetheless, the bond distance in HI can be measured by right clicking one the Jmol model, choosing "measurements", then clicking on the atoms in sequence. We'll use empirically (from experiment) measured values here:

Solution Rearranging Eq. (1) from Polarizability, we have

It is worth noting in the above example that the dipole moment measures the electrical imbalance of the whole molecule and not just that of the H―I bonding pair. In the HI molecule there are four valence electron pairs, with the three lone pairs on the right of the I atom also contributing to the overall negative charge of I.