Marshmallow was originally used medicinally to soothe sore throats. It was made from the root of the marsh mallow plant, Althaea officinalis, sometimes mixed with sugars or other ingredients and whipped to make something like the modern marshmallow.[1] Modern Campfire® marshmallows contain Corn Syrup, Sugar, Modified Food Starch (Corn), Dextrose, Water, Gelatin, Natural and Artificial Flavor, Tetrasodium Pyprophosphate and Blue 1[2], and the gelatin protein made from bones and hides makes them off limits to strict vegetarians. We'll consider the marshmallow to be 7.5 g of pure sugar (sucrose) for the calculations below. 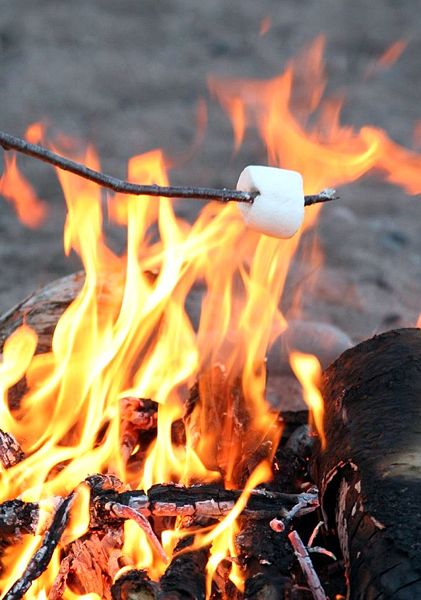 Let's investigate the fate of a marshmallow when you eat it, and explain in part where the food energy comes from.

We'll need the energy supplied by the overall reaction for the aerobic metabolism of sucrose, which occurs when plenty of oxygen is available:

But that reaction lumps together a lot of interesting processes. The hydrolysis (cleavage by water) of sucrose into the simple sugars glucose and fructose occurs in saliva, but not without the enzyme sucrase that catalyzes the reaction:

Lactobaccili in our mouth partially convert the simple sugars to lactic acid (which causes tooth decay), in the overall reaction for glycolysis plus fermentation:

This reaction provides energy to sustain the bacteria, but it also occurs in our bodies when sugar is metabolized anaerobically (with limited oxygen), and the lactic acid is responsible for muscle ache the day after we exert our muscles. Lactobaccilli are used in controlled recipes to create lactic acid that creates the tart or sour taste of yogurt and sauerkraut.

If bacteria don't metabolize the glucose, we do, using it to produce ATP in a process called glycolysis which involves about ten different reactions that end with the production of pyruvic acid (C3H4O3). If our muscles are well oxygenated, the pyruvic acid is converted to CO2 and H2O and we have overall reaction (1), yielding energy that we'll calculate below. During extended exercise, glycolysis comes to a halt when it runs out of oxygen to make an essential reactant, NAD+. Then anaerobic fermentation takes over, producing the NAD+ and converting the pyruvic acid to lactic acid (C3H6O3), which builds up in muscles as a result of reaction (3). This produces a lot less energy than aerobic metabolism, as we'll see below.

The process makes just 2 ATP instead of many more that would be produced if the pyruvic acid were metabolized aerobically by overall reaction (1).

How do food chemists calculate the energy produced in all these reactions?

By now you can imagine that there are innumerable reactions involved in just food metabolism, and it would be virtually impossible to list all the thermochemical equations, along with the corresponding enthalpy changes.

Fortunately Hess' law makes it possible to list just the standard enthalpy of formation ΔHf, for each compound, and use these ΔHf values to calculate the ΔHm for any reaction of interest.

The standard enthalpy of formation is the enthalpy change when 1 mol of a pure substance is formed from its elements. Each element must be in the physical and chemical form which is most stable at normal atmospheric pressure and a specified temperature (usually 25°C).

For example, since H2O(l) appears in Equation (1), we'll need its ΔHf to calculate the energy available from a marshmallow. If we know that ΔHf [H2O(l)] = –285.8 kJ mol–1, we can immediately write the thermochemical equation

The elements H and O appear as diatomic molecules and in gaseous form because these are their most stable chemical and physical states. Note also that 285.8 kJ are given off per mole of H2O(l) formed. Equation (1) must specify formation of 1 mol H2O(l), and so the coefficient of O2 must be ½.

In addition to (4), we'll need two other ΔHf, values to calculate the energy in a marshmallow. They are the ΔHf values for the other compounds in Equation (1), CO2 and C12H22O11. All the ΔHfmvalues can be found in standard tables like the one at the end of this section, and we can write the equations (5) and (6) knowing the definition of ΔHf:

We can then combine the enthalpies to get the needed ΔHm:

Notice that this value appears in the Table at the end of this section. With Hess' Law, we can always calculate an enthalpy of combustion from enthalpies of formation, or vice versa! Reaction (6) corresponding to ΔHfm of sucrose does not occur, but its enthalpy can be calculated from enthalpies of reactions that do occur.

Notice that our calculation simplifies to:

Calories in a Marshmallow

Recap of the Calculation of a Reaction Enthalpy

Again, this can he summarized by the important equation

One further point arises from the definition of ΔHf. The standard enthalpy of formation for an element in its most stable state must be zero. That's why ΔHf for O2 doesn't appear in the calculation above; it's value is zero, corresponding to the formation of O2 from its elements. There's no change in the reaction below, so ΔHf = 0:

Standard enthalpies of formation for some common compounds are given in the table below, and more are given in Table of Some Standard Enthalpies of Formation at 25°C. These values may be used to calculate ΔHm for any chemical reaction so long as all the compounds involved appear in the tables. To see how and why this may be done, consider the following example.

Energy of Sucrose Hydrolysis in Saliva

Use standard enthalpies of formation to calculate ΔHm for the reaction

The process is actually exothermic, releasing a small amount of heat energy. The measured energy for hydrolysis of maltose to 2 glucose units is only -4.02 kJ[3].

Energy in Glucose Metabolism and Anaerobic Formation of ATP

Use the table of standard enthalpies of formation at 25°C to calculate ΔHm for the reaction below (glycolysis + fermentation), which is associated with the production of 2 mol ATP (as well as NADH) in anaerobic metabolism in your body. The ΔHf for lactic acid and glucose are -687 and -1271 kJ mol–1 respectively.

This energy is used in part to make 2ATP molecules rather than being released entirely as heat. Note that -5643.8 kJ mol–1 resulted from the aerobic metabolism of sucrose (above) but only 2 (-103)kJ = -206 kJ would result from its anaerobic metabolism (since 1 mol of sucrose yields 2 mol of glucose).

1. Estimate, based on a theoretical calculation

From ChemPRIME: 3.9: Standard Enthalpies of Formation