To translate pharmacology research into patient care, potential drugs ultimately have to be tested in people. This multistage process is known as clinical trials, and it has led researchers to validate life-saving treatments for many diseases, such as childhood leukemia and Hodgkin's disease. Clinical trials, though costly and very time-consuming, are the only way researchers can know for sure whether experimental treatments work in humans.

Scientists conduct clinical trials in three phases (I, II, and III), each providing the answer to a different fundamental question about a potential new drug: Is it safe? Does it work? Is it better than the standard treatment? Typically, researchers do years of basic work in the lab and in animal models before they can even consider testing an experimental treatment in people. Importantly, scientists who wish to test drugs in people must follow strict rules that are designed to protect those who volunteer to participate in clinical trials. Special groups called Institutional Review Boards, or IRBs, evaluate all proposed research involving humans to determine the potential risks and anticipated benefits. The goal of an IRB is to make sure that the risks are minimized and that they are reasonable compared to the knowledge expected to be gained by performing the study. Clinical studies cannot go forward without IRB approval. In addition, people in clinical studies must agree to the terms of a trial by participating in a process called informed consent and signing a form, required by law, that says they understand the risks and benefits involved in the study. 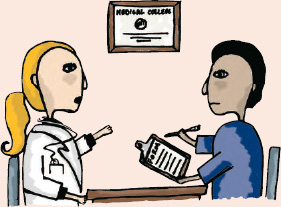 Phase I studies test a drug's safety in a few dozen to a hundred people and are designed to figure out what happens to a drug in the body—how it is absorbed, metabolized, and excreted. Phase I studies usually take several months. Phase II trials test whether or not a drug produces a desired effect. These studies take longer—from several months to a few years—and can involve up to several hundred patients. A phase III study further examines the effectiveness of a drug as well as whether the drug is better than current treatments. Phase III studies involve hundreds to thousands of patients, and these advanced trials typically last several years. Many phase II and phase III studies are randomized, meaning that one group of patients gets the experimental drug being tested while a second, control group gets either a standard treatment or placebo (that is, no treatment, often masked as a "dummy" pill or injection). Also, usually phase II and phase III studies are "blinded"—the patients and the researchers do not know who is getting the experimental drug. Finally, once a new drug has completed phase III testing, a pharmaceutical company can request approval from the Food and Drug Administration to market the drug.

Scientists are currently testing cone snail toxins for the treatment of which health problem?

How are people protected when they volunteer to participate in a clinical trial?

Why do plants and marine organisms have chemicals that could be used as medicines?