There are a large number of different cytokines that are released from immune cells. Some examples and their activities are shown in the diagram below and described in the text that follows. They are 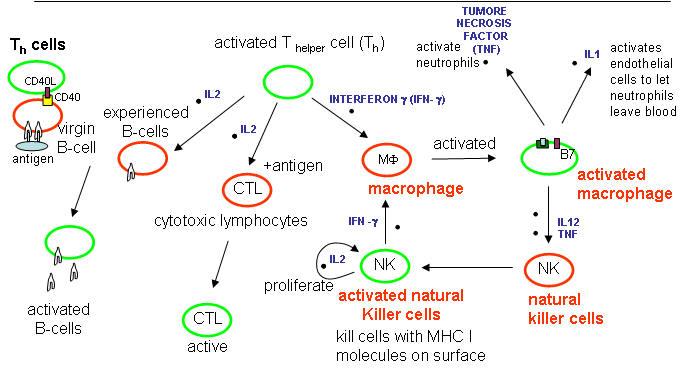 Cytokines released from cells such as macrophages in the innate IS:

Tumor Necrosis Factor: TNF - from activated macrophages and dendritic cells. Main mediator of acute inflammation. Induces fever and sleep by acting on sites in the brain. Promote scar formation (excessive wound healing). Too much can cause shock. Acts on

Interferon a, b, w : Are produced by virally-infected cells.

Cytokines released after antigen activation of T cells in the adaptive immune system:

Chemokines are chemotactic cytokines, or protein that recruit other cells towards the site of release. Some examples are listed below: