Living tissue contains large amounts of water and the light elements, hydrogen, carbon, nitrogen, and oxygen, with lesser quantities of phosphorus and sulfur. The abundance of these light nuclei affects the interaction of nuclear radiation with living tissue. Alpha and beta particles, protons, and fission products of sufficient energy, as well as photons (gamma and x-rays), can remove the valence electrons of the elements in living materials. This process, known as ionization, changes the chemical reactivity of the affected atoms. Molecules containing ionized atoms may react to form substances that are detrimental to life. The ionizing particles and fission products may undergo thousands of collisions with the atoms before stopping thus they may cause extensive ionization in the target material. The radiation produced by nuclear reactions interacts with living tissue in many ways depending on the type of radiation. This radiation includes high-energy, charged particles (alpha and beta), neutrons of various energies, and photons (gamma and x-rays). In addition to this primary radiation, fission also produces radioactive isotopes of many elements, which in turn can emit particles and photons, known as secondary radiation.

Many of these isotopes, such as strontium and iodine, can enter the body, where they replace nonradioactive elements and remain there emitting ionizing radiation. In many ways, the presence of these radioactive isotopes is more insidious than direct radiation from external sources that is more easily detected and reduced by proper shielding.

The interaction of a high-energy photon with matter is very different than that experienced by a charged particle. Instead of losing its energy through large numbers of collisions in a relatively short distance, a photon loses its energy in a single interaction with an atom of the target material. The outcome of this interaction depends on the energy of the photon; it can produce secondary electrons and photons that can continue the transfer of energy to nearby atoms.

Because gamma and x-ray photons, as well as neutrons, transfer energy to neighboring atoms by means of secondary electrons and photons, the radiation they produce is known as indirect ionizing radiation. Conversely, the radiation produced by alpha particles and protons is known as direct ionization because its energy is transferred directly to the target material.

Figure \(\PageIndex{3}\): Ionizing radiation can (a) directly damage a biomolecule by ionizing it or breaking its bonds, or (b) create an H2O+ ion, which reacts with H2O to form a hydroxyl radical, which in turn reacts with the biomolecule, causing damage indirectly. mage used with permission (CC BY; OpenStax).

Because neutrons have short half-lives (approximately 640 seconds) they do not exist in the absence of fission. In collisions with the light nuclei present in living material, fast neutrons produce indirect ionizing radiation. When slow neutrons are captured by target nuclei, most of their energy is dissipated as heat and thus little ionization is produced. Thus, the net effect is that neutrons damage tissue by causing both ionization and heating.

All the processes described so far are physical and occur within approximately 10-16 of a second of interacting with living tissue. After this, some energized atoms and molecules can dissipate their energy by becoming free radicals and other excited molecules. Free radicals are atoms or molecules that are electrically neutral and have an unpaired valence (outer) electron; they are extremely reactive chemical species. Because living tissue contains a large amount of water, the primary free radicals are H× and OH×; the former is a strong reducing agent and the latter, which predominates, is a strong oxidizing agent. These free radicals are known to cause abnormal chemical reactions in living substances.

There are at least three ways to measure the effect of radiation. Each method has specific units of measurement associated with it:

Figure \(\PageIndex{4}\): The ability of different types of radiation to pass through material is shown. From least to most penetrating, they are alpha < beta < neutron < gamma. mage used with permission (CC BY; OpenStax).

The ability to penetrate matter differs greatly among the various types of nuclear radiation. A sheet of paper, a layer of clothing, or an inch of air can stop relatively slow moving, heavy alpha particles. Thus, it is easy to shield against alpha radiation, unless the alpha-emitting substance enters the body. Beta particles are lighter and travel faster than alpha particles. They can penetrate a fraction of an inch in solids and liquids and several feet in air. Gamma rays and neutrons are electrically neutral and thus not slowed by collisions with the target materials. They do not interact strongly as the charged alpha and beta particles do and are therefore highly penetrating. Their ability to penetrate the target material depends upon their energy. High-energy gamma rays may require several feet of material for adequate shielding.

When radiation strikes complex biological molecules, such as proteins or nucleic acids, it may fracture the molecules and prevent their proper functioning. This can result in loss of cell vitality, decreased enzyme activity, initiation of cancer, and genetic mutations. The immediate effects of acute exposure to radiation are caused by free radicals rupturing the cell membranes. This rupturing causes the cells to lose their contents and die. If enough cells are killed, functions associated with the cells cease. Death occurs because of the direct loss of vital organs or because of secondary infections resulting from the breakdown of the immune system. The effect depends on the dose of radiation received.

High doses of more than 100 gray affect the central nervous system, resulting in loss of coordination (including breathing problems), with death occurring within 1 or 2 days. Doses from 9 to 100 grays damage the gastrointestinal tract, causing nausea, vomiting, and diarrhea. Progressive dehydration can result in death within several weeks. Lower doses (from 3 to 9 grays) damage the bone marrow and other haematopoietic tissues. This can lead to loss of appetite and hair, hemorrhaging, inflammation, and secondary infections such as pneumonia. These effects are also found in patients undergoing radiation therapy. Doses of less than 3 grays are rarely lethal, but cause symptoms that include loss of appetite and hair, hemorrhaging, and diarrhea.

Long-term risks of radiation exposure center on the incidence of cancer and genetic mutations. Both effects have proven difficult to determine since cigarette smoking, diet, and sunlight exposure are also known to cause cancer and possibly to promote genetic mutations. Analysis of approximately 100,000 survivors of Hiroshima and Nagasaki shows a slight increase in genetic mutations over what would be expected for a normal population, but this increase is so small that it may not be statistically significant. Hiroshima survivors who received more than 2 gray showed a slight increase in the instances of cancer over a normal population. There is a good deal of controversy over the contribution of natural background radiation and man-made radiation to the incidence of cancer in humans. The dosage threshold below which radiation has no effect is also controversial.

Background radiation comes from three sources: cosmic rays, naturally occurring radioactive elements such as radon-222, and solar radiation. The amount of exposure to this natural radiation depends on a number of factors, such as geographic location, house construction materials, medical treatments, and occupation. The average exposure for a U.S. resident is 0.36 rem per year.

The rapidly dividing cancer-producing cells are most susceptible to radiation damage. Thus radiation is used to treat many types of cancer. It has, however, proven most effective against individual tumors. Focused radiation beams can shrink or eliminate cancerous tumors while doing less damage to surrounding tissue. In most cases, the benefits of radiation therapy outweigh the risks to the patient’s health. Radiation is also used in medical diagnosis. X-ray imaging and radioactive tracer studies provide information useful in treating patients. 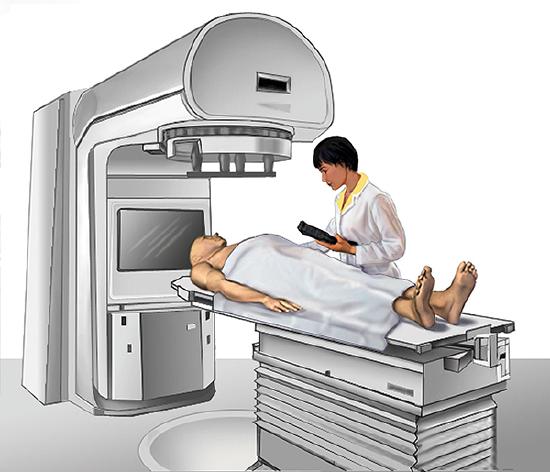 Radiation, like other aspects of nuclear science, can be both destructive and beneficial. The intelligent use of radiation for the treatment of cancer, medical diagnosis, food preservation, and other useful applications requires an informed public. Likewise, the solutions to the storage of nuclear waste also necessitate public understanding of the effects of nuclear radiation.