The discovery of fission led to two potential routes to the production of fissile material for the first nuclear weapons by the United States in the 1940s. The first involved separating uranium-235 from uranium-238 isotopes in natural uranium by gaseous diffusion. The second path produced plutonium-239 by bombarding fertile uranium-238 in a nuclear reactor. But both approaches began with mining of uranium ore. Today, the production of fissile fuel for nuclear power reactors uses many methods originally developed for producing nuclear weapons. This unit addresses the metallurgy of uranium, its conversion into gaseous uranium hexafluoride required for enrichment processes, and the fabrication of fuel rods from the enriched uranium hexafluoride. The enrichment processes are covered in a separate unit.

Uranium, the heaviest naturally occurring element, is about 500 times more prevalent than gold and about as abundant as tin. However, it is usually found in trace concentrations. The most common mineral containing uranium is pitchblend which is composed of \(UO_2\) in the presence of smaller amounts of \(UO_3\). If the concentration of pitchblend is great enough for it to be extracted economically, the material is known as an ore. Deposits containing more than 0.1% pitchblend are economically viable. Deposits containing more than 20% pitchblend are rare. In 2007, Canada, Australia, and Kazakhstan accounted for over half of the world’s uranium production. The cost of uranium is determined by the concentration of uranium in the ore: the higher the concentration, the lower the cost.

Mining and Preparation of Yellowcake

The objective of uranium extraction chemistry is the preparation of \(U_3O_8\), called yellowcake (Figure 1). Extraction of uranium is often difficult, and the metallurgical procedures vary with the geological environment of the ore. Traditional methods of open pit or underground mining are used to extract uranium ore. More recently, in situ leaching has also been used to extract and concentrate the ore. This technique circulates oxygenated groundwater through a porous ore body to dissolve the uranium-containing compounds and bring them to the surface. Figure 1: Drums of Yellowcake. Courtesy of the U.S. Department of Energy

The ore is first crushed and ground to liberate mineral particles (Figure 2). An amphoteric oxide is then leached with sulfuric acid. Two methods are used to concentrate and purify the uranium: ion exchange and solvent extraction. Solvent extraction, the more common method, uses tertiary amines in an organic kerosene solvent in a continuous process.

Then the amine sulfate extracts the uranyl ions into the organic phase while the impurities remain in the aqueous phase. In the case of the uranyl sulfate ion, the following reaction occurs

The solvents are removed by evaporation in a vacuum, and ammonium diuranate, (NH4)2U2O7, is precipitated by adding ammonia to neutralize the solution. The diuranate is then heated to yield solid U3O8.

At the refinery, the yellowcake is dissolved in nitric acid. The resulting solution of uranium nitrate, \(UO_2(NO_3)_2 \cdot 6H_2O\), is fed into a continuous solvent extraction process. The uranium is extracted into an organic phase (kerosene) with tributyl phosphate, and the impurities remain again in the aqueous phase. After this purification, the uranium is washed out of the kerosene with dilute nitric acid and concentrated by evaporation to pure \(UO_2(NO_3)_2 \cdot 6H_2O\). Heating yields pure \(UO_3\). The initial separation and refining processes generate large volumes of acid and organic waste.

Because the uranium isotopes have identical chemical properties, the processes employed for enrichment must use physical techniques which take advantage of the slight differences in their masses. The two enrichment methods used today, centrifugation and diffusion, require that the uranium be in a gaseous form, uranium hexafluoride, \(UF_{6\;(g)}\). Although enrichment involves physical processes, chemistry plays an important role in synthesizing UF6 gas and returning the \(UF_6\) enriched in U-235 to a solid, \(UO_2\).

Conversion to the hexafluoride involves the following sequence of reactions:

Production of solid fuel rods from uranium hexafluoride gas enriched in U-235 requires another series of chemical and metallurgical processes (Figure 3).

The uranium hexafluoride is first reduced to uranium tetrafluoride with hydrogen.

Uranium metal is then produced by reducing the uranium tetrafluoride with either calcium or magnesium, both active group IIA metals that are excellent reducing agents.

Production of uranium dioxide, often used as a reactor fuel, from uranium hexafluoride can be accomplished by the following reaction.

Reactor fuel consists of ceramic pellets formed from pressed uranium oxide, which is sintered (baked) at a high temperature (over 1400°C). The pellets are then placed in metal tubes made of a zirconium alloy or stainless steel and sealed in an atmosphere of helium to form fuel rods. The fuel rods are then grouped in clusters to form the fuel assemblies, which are placed into the reactor core (Figure 4). 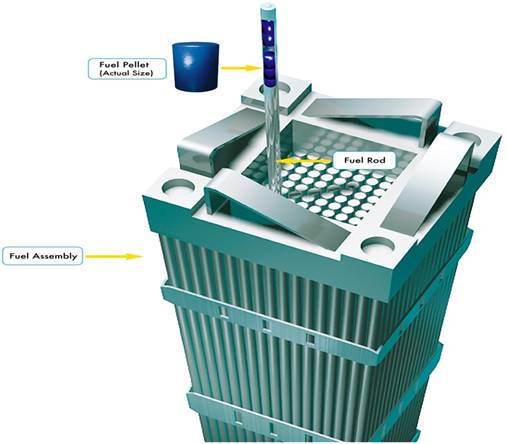