Peptide fragments produced in tandem MS experiments are named using a letter-number scheme that identifies which bond was broken and which side of the peptide (the N-terminus or the C-terminus) became the charged fragment (Figure 1). As noted above, CID typically results in cleavage of the peptide bond and therefore produces b and y ions. When the N-terminal side of the peptide is the charged fragment and the C-terminus is a neutral loss, the result is a b ion. When the C-terminal side is the charged fragment, the result is a y ion. In either case, the ions are numbered sequentially from the charged terminus, meaning that the first N-terminal residue gives the b1 fragment, and the first C-terminal residue gives the y1 ion. Other fragmentation methods, such as photodissociation, electron capture, and electron transfer dissociation can cleave other bonds within the peptide, giving rise to a, x, c, and z ions. In some cases, CID may also produce a ions, which differ from b ions by the absence of a carbonyl, making them 28 amu lighter than the corresponding b ion.

For appropriate CID conditions, it is often possible to obtain a series of b and y ions for a peptide (Figure 1). The mass differences between b ions (or between y ions) are characteristic of the amino acid residues which have been lost, and careful examination of the mass spectrum can yield the peptide sequence from the MS-MS data. For example, Figure 3 shows model data for fragmentation of the MRFA peptide. The mass difference between peaks from right to left are 71, 147, 156 amu, corresponding in mass to sequential losses of A, F, and R amino acid residues (Table 2), indicating that these amino acids form a series in the peptide backbone of the analyte. Figure 2. Structure of the tetrapeptide MRFA. 2. Sketch the a2, b2, and y2 ions for the tetrapeptide MRFA shown in Figure 2. What are the expected masses of these fragments? 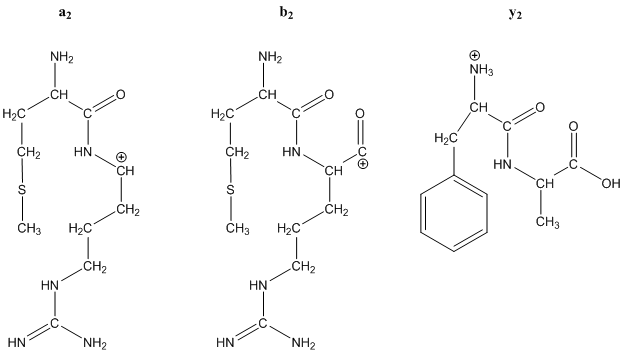 The a2 ion has an expected mass of 260. The b2 ion (MR) has a mass of 288; note that this is 28 amu heavier than the a2 fragment since the b2 fragment has an additional carbonyl group. The y2 ion (FA) has a mass of 237. These values are monoisotopic masses. Students may need to be reminded to use monoisotopic masses (from Table 2 below) rather than isotopic weighted averages for calculations of mass for mass spectrometry experiments.

3. What is the mass difference between the y3 and the y2 ion in Figure 3?

4. What amino acid residue corresponds to this mass difference? Does this make sense given the sequences of these two ions?

In practice, a complete b and y ion series may not be obtained, but it is often possible to deduce the peptide sequence from MS-MS data without referring to external databases or genomic data. This method of determining peptide structure is called de novo sequencing since the sequence is determined without reference to outside data. Because de novo sequencing does not rely on an external database, peptides can be identified even if they have unexpected post-translational modifications or arise from organisms with unsequenced genomes. Several research groups have developed algorithms to automate de novo sequencing from MS-MS data. These algorithms are designed to account for missing b and y ions, identify post-translational modifications, and address other challenges, including identification of oxidation and other chemical changes to proteins and peptides. Database searching is an alternative to de novo sequencing for longer peptides and proteins. Similarly to database searching for peptide mass fingerprinting, MS-MS database searching relies on genomic data to predict the expected spectra for MS-MS analysis. The experimental spectra are then matched to the predicted spectra to make peptide and protein assignments.

1. Consider the data in Table 2. By what value do the residue MW and the amino acid MW differ?

2. If needed, review the module introduction to peptides and proteins. Why is the MW of an amino acid residue in a peptide chain different from the mass of the full amino acid? Sketch a reaction to support your answer.

3. Are there any amino acids that could not be distinguished from one another using a mass analyzer with unit resolution (e.g., a quadrupole ion trap)?

4. Leu-enkephalin is a pentapeptide with the sequence YGGFL that is involved in neurotransmission. Tabulate the amino acid sequence and the expected monoisotopic MWs, and fragments of leu-enkephalin. Work in groups, dividing the required calculations among members.

A. Table 3. Expected precursor and fragment ions for CID MS-MS of leu-enkephalin.

Instructor note: If time is limited, you may also allow your students to calculate these masses using the Institute for Systems Biology’s peptide calculator.

5. Using your completed Table 3 above, identify as many of the peaks in the leu-enkephalin MS-MS spectrum shown in Figure 4 below as possible, remembering that CID can result in the small neutral losses that you noted in Table 1 in addition to retrosynthetic fragmentation. A. Note that the a4 fragment may also be correctly identified as the b4 fragment with the neutral loss of CO. Similarly, the a5 fragment is b5-CO. 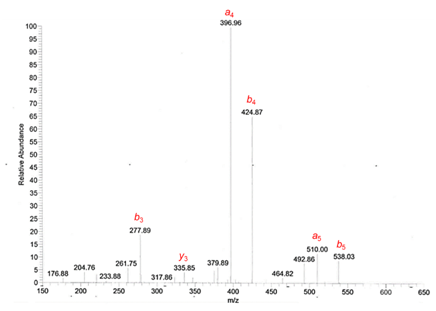 6. Imagine researchers take a sample of blood serum from a patient and perform a shotgun proteomics experiment with a trypsin digestion and tandem MS detection. Would you recommend a separation step in between the tryptic digest of the serum proteins and the mass spectrometric detection? Why or why not?

A. A separation step will be crucial in this application. Serum contains many different proteins, and without a separation step before the MS analysis each mass spectrum will contain peptides and fragments from multiple proteins, making data interpretation difficult and potentially impossible.

To the best of your ability, use the MS-MS spectrum in Figure 5 below to de novo sequence an unknown tetrapeptide. To support your proposed sequence, make a table showing the expected mass of each fragment and the actual mass you observe for the peak.

A. The plot below labels the b and y ion series along with the mass difference between fragments and corresponding amino acid residue. The peptide sequence is MYGAV, and the data is from F. Klink, “MS Solutions #10: Peptide Sequencing with Electrospray LC/MS Part 2: Interpretation of a Simple Spectrum,” Separation Science, http://www.sepscience.com/Information/Archive/All-Articles/246-/MS-Solutions-10-Peptide-Sequencing-with-Electrospray-LCMS-Part-2-Interpretation-of-a-Simple-Spectrum

Note to instructors: To determine this sequence from the raw data, one key is to identify which peaks are b ions and which are y ions. This is best done using a print-out to calculate mass differences between various combinations of peaks, looking for mass differences that correspond to an amino acid residue. In particular, identifying the C-terminal valine is difficult because there is no b5 ion. Instead, the difference between the [M+H]+ peak and the b4 ion corresponds to the mass of the entire valine residue. To make this assignment easier, you could identify which ions belong to which series (as in the figure shown below), provide a few of the peak assignments to start, or provide the sequence and ask students to identify the ions.

For those who are interested, a more detailed tutorial on de novo sequencing is available from Ion Sense.