Skip to main content
Matrix-assisted laser desorption ionization (MALDI) is a technique that generates gas-phase peptide and protein ions. Proteins are nonvolatile and cannot simply be heated to make the gaseous form. (Think about a steak on the grill. The steak chars but does not vaporize.) Instead proteins are desorbed (released from a surface) by mixing the protein with a matrix molecule and irradiating the mixture with a pulse from an ultraviolet laser. The following figure shows the structure of various molecules used as the MALDI matrix. 1. What structural features do these molecules have in common? Why are these common features important for a MALDI matrix?

A. They have aromatic rings so they have strong absorption in the ultraviolet region of the spectrum. The have a carboxylic acid group so they can transfer a proton to the biomolecule giving it a positive charge.

The α-cyano-4-hydroxcinnamic acid (CCA) molecule is a MALDI matrix used for peptide and protein analysis. The matrix is combined with a mixture of peptides and placed on a metal plate. A pulsed nitrogen laser with a wavelength of 337 nm is used to irradiate the peptides and matrix. The absorption spectrum for a peptide and the CCA matrix is shown. 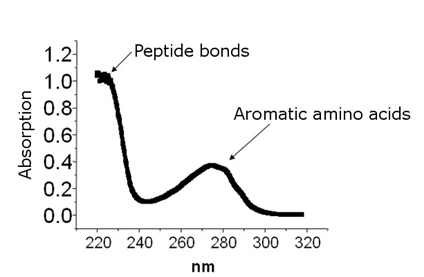 2. Propose a reason that the laser is matched to the absorption of the matrix (CCA) and not the peptide. What would happen to the peptide if it absorbed a high energy pulse of laser light?

A. It would break bonds in the peptide causing fragmentation.

In the MALDI process, the laser is directed at the mixture of CCA matrix and peptides. The matrix absorbs the laser light, but the peptides do not. The matrix heats up and “explodes” from the surface carrying the peptide with it. (It is similar to skydiving. The airplane (matrix) carries the people (peptides) into the air and when they jump, they are temporarily flying.) After absorbing light the matrix is in an excited state and transfers a proton (H+) to the peptide giving it a positive charge. The invention of MALDI enabled the mass spectrometric analysis of large nonvolatile biomolecules and was so important that its inventor Koichi Tanaka of Shimadzu Corporation was awarded one-third of the 2002 Nobel Prize in Chemistry. The MALDI process is depicted in the figure below. The purple color represents the MALDI matrix and the green color represents peptides. Energy from the laser is absorbed by the matrix, causing the matrix to desorb from the surface. The matrix carries the peptides into the gas phase and gives them a charge by donating a proton. Molecular ions of the peptides are created because peptides do not absorb laser light which would break bonds within the molecule.

An example of a typical mass spectrum of a mixture of proteins ionized by the MALDI method is shown below. The matrix is 2,5-dihydroxybenzoic acid (DHB) and the mixture contains three proteins; ubiquitin, cytochrome C and equine myoglobin. A. Soft ionization method. Fragmentation is not evident in this mass spectrum.

2. What is the identity of Peak 1 in the mass spectrum?