Solid phase extraction1 (SPE) is a sample preparation technique using a solid adsorbent contained most commonly in a cartridge device (Figure 1), or on a disk to adsorb select species from solution. SPE is used to isolate a species in a sample or to clean-up a sample before analysis. 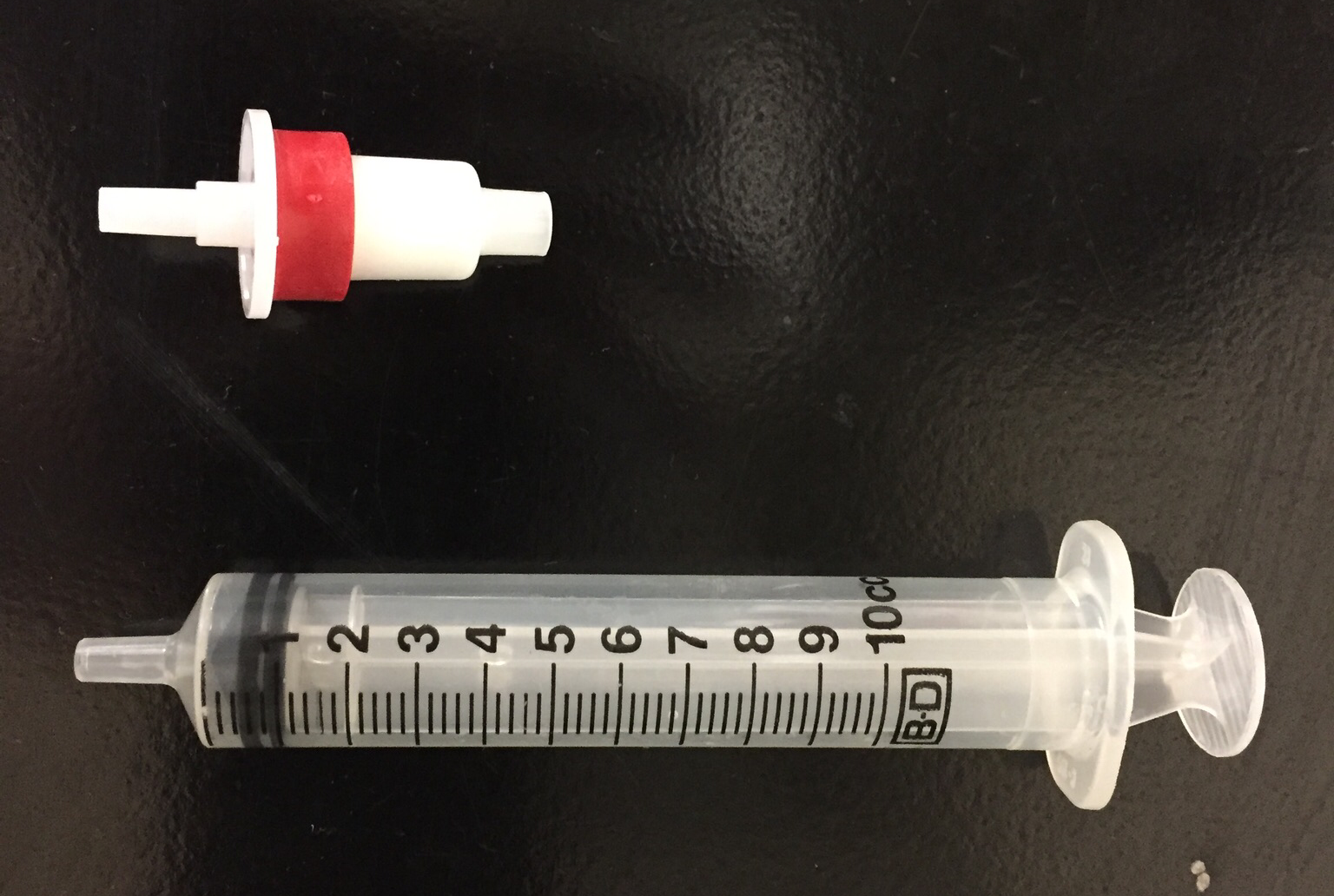 As the sample is slowly passed through the SPE cartridge or disk, the analyte and some of the sample matrix compounds may be retained on the SPE material. Depending on the properties of the analyte and the SPE sorbent, a wash solvent can be chosen to selectively remove (elute) components from the SPE sorbent while retaining others. The ultimate goal is to remove interferents present in the matrix from the analyte, producing a solution containing primarily analyte. The following different scenarios can be utilized to achieve this goal.

The captured analyte elution solvent can be further reduced in volume to concentrate the analyte prior to analysis.

SPE is used to: How does SPE compare to liquid-liquid extraction?

Liquid-liquid extraction (LLE) separates an analyte through partitioning between two immiscible solvents. LLE suffers from several disadvantages that can be overcome using SPE, including the need for expensive glassware (separatory funnels), the large and costly amount of organic solvents needed for separation, as well as the less than quantitative recoveries that can stem from low values of KP or incomplete phase separations. For a review of LLE, refer to Section 2 of this module.

The general steps involved in performing SPE are:

SPE methods start with a conditioning step (Step 2 above). This consists of rinsing the SPE cartridge with a solvent similar to the matrix of the sample you want to load. For an aqueous sample, we would choose an aqueous solvent such as water for conditioning. Once the cartridge has been conditioned, the sample is then loaded on the cartridge (Step 3; note Steps 3 and 4 can be viewed in Figure 3). The amount of sample loaded will vary depending on the purchased cartridge. The cartridges can be loaded on a vacuum manifold to apply a vacuum or centrifuged to speed up the separation process. This separation can also be done using gravity, but will take more time. Once the sample has been collected on the adsorbent, the cartridge can be rinsed with 100% H2O to remove un-retained compounds. More rinses can then be done with increasing percentages (ex.: 5%, 10%, 20%, 100%) of an organic solvent, such as isopropanol, to remove compounds in terms of decreasing polarity.

Q1. Explain the difference between liquid-liquid extraction and solid-phase extraction.

Figure 3 shows an SPE procedure on a grape Kool-Aid sample. In this example, a polar solvent is passed through a less polar adsorbent material. This is referred to as reversed-phase (RP) SPE. For this example, let’s say we are interested in determining the amount of red and blue dye in the sample. (Please note that the examples in this module involve separating dyes, as the separation can be easily visualized. However, SPE also can be used to extract and separate colorless species.)

Q2. List one or two species that you might find in the Kool-Aid matrix. Do you expect these species to be water soluble?

Q3. Consider Figure 3. In steps 1 and 2, grape Kool-Aid is passed through the cartridge, followed by water. Which species are retained on the adsorbent and which species are eluted with the water? If you said “decreasing” you are correct. This is termed making the solvent “stronger”, i.e. more like the adsorbent, which in this case is non-polar.

Q5. Consider the two scenarios at the beginning of this section for retaining and eluting analyte (dye molecules) and interferences. Which scenario is being used in Figure 3?

In the Kool-Aid example, we used a SPE cartridge where the adsorbent was less polar than the solvent. We called this reversed phase SPE. The first step in using SPE is to select the correct type of adsorbent for the type of separation that is needed. The type of SPE sorbent is chosen based on the chemical properties of the species we wish to separate. It is important to have an understanding of the sample matrix, and the analytes of interest, when selecting the type of SPE. For example, if the analyte of interest is charged or ionizable, you would select an ion exchange cartridge, either anion or cation depending on the charge of your analyte.

The types of SPE fall into several categories including, reversed phase, normal phase, ion exchange (anion/cation), as well as mixed-mode phases, which have the properties of more than one type of SPE material. Figure 4 describes the properties of these phases. Figure 4. Various types of SPE with details about their separation mechanisms.

Reversed phase SPE techniques are optimal for analytes with moderate to low polarity, and separate analytes based on hydrophobicity with the most polar compounds eluting first. Because many analyses involve analytes dissolved in an aqueous sample (e.g. surface waters, wastewater, urine or plasma), SPE using reversed phase sorbents are commonly employed. Let’s think back to the Kool-Aid example. Here we want to again separate the red and blue dyes that form the purple colored Kool-Aid solution. Figure 5 shows a cartoon similar to the process in Figure 3.

The process of separating the red and blue dyes within the purple Kool-Aid sample will start by loading an aliquot of sample onto a reversed phase cartridge that has been pre-conditioned with water. The first fraction collected will contain mostly water and compounds of high polarity and the dye will be retained in the adsorbent. Rinse steps with increasing concentrations of isopropyl alcohol (IPA) will be introduced to elute the red and blue dyes separately. Once the dyes have been collected, the IPA is increased to elute non-polar species within the sample.

Q6. Figure 5 depicts the separation of dyes within the Kool-Aid sample. The red dye appears to elute before the blue dye with only a small addition of IPA. Please explain why the red dye elutes first.

Normal phase SPE techniques are commonly used when the analyte of interest has low to high polarity, or is neutral.3 The cartridge contains a polar adsorbent, such as silica. This separation will be based on polarity, with the least polar components eluting first. The sample is usually in a non-aqueous matrix. For example, a researcher wishes to determine the concentration of polycyclic aromatic hydrocarbons (PAH) in coffee samples. Many PAH are carcinogenic and can be introduced during the roasting process. The coffee beans are ground up, dissolved and the oily residue extracted into the organic solvent 1-pentane. This extraction sample contains the PAH but also potential interferents. Next, SPE is used to clean up the sample and/or concentrate the PAH. A “bind and elute” (Figure 2A) sample cleanup strategy is employed. A PAH, such as benzo(k)fluoranthene shown in Figure 6, is dissolved in the 1-pentane phase, but the pi-electrons can interact with the polar functional group (e.g. silica) on the solid phase. When the sample is loaded onto the SPE cartridge, the PAH are retained onto the stationary phase. Next, the solvent is changed and the PAH are eluted from the cartridge.

Q7. In order to elute the PAH from the cartridge, how would you alter the polarity of the solvent?

Q8. A pesticide has been extracted from a soil sample. The pesticide is relatively non-polar and soluble in organic solvents. However, it contains a polar functional group. Describe a procedure to separate the pesticide from potential interferents (such as hydrocarbons) in the sample.

Q9. If we wanted to use SPE in the preparation of soda and tea samples, which type of adsorption would we use (Normal or Reversed phase) and why?

Ion exchange SPE lets us separate compounds based on charge. Let us look back to the example of 4-aminophenol and acetaminophen (Section 1 on liquid-liquid extraction). Notice that the 4-aminophenol has an –NH2 group that will be positively charged at an acidic pH, while the acetaminophen will not. We would conclude that the best way to separate these two compounds would be by charge using ion exchange.

Q10. Given the example of cation exchange, can you explain a scenario where anion exchange SPE would be necessary?

Q11. Assuming you have two analytes of interest (refer to Figure 7), using ion exchange SPE, please explain how you could isolate the two analytes separately. In a perfect example of bind and elute SPE, only the analyte of interest would be retained while all interferents would be rinsed off leaving a pure, concentrated sample with little to no loss. Unfortunately, this scenario is unlikely with the use of a single SPE cartridge. Many times, conditions strong enough to remove impurities will also remove some analyte, reducing the recovery. Mixed-mode SPE can enhance analyte retention and/or reduce matrix impurity contamination.

Mixed-mode SPE combines the capabilities of ion-exchange and reversed-phase SPE for an enhanced separation. Examples of mixed-mode SPE include:

The ion-exchange component of the cartridge allows the appropriately charged compounds to be retained for further extraction. Once the appropriately charged compounds are retained, the SPE can be rinsed to remove any impurities. The pH of the eluent can then be adjusted to reduce the charge on the analyte molecules, which will release them from the ion-exchange component of the cartridge causing them to elute. The mixed-mode SPE system also offers a reverse-phase mechanism. This will allow you to change the organic concentration of the eluent to achieve improved selective elution.

Mixed-mode is commonly used in the separation of basic, acidic, and neutral compounds in a mixture. This is widely used in the concentration, purification, and analysis of pharmaceutical compounds and antibacterial agents found in wastewater.

Use the table below to answer the following questions about an SPE method. Q12. Consider the various SPE modes we discussed. Choose and defend your choice for the most appropriate methods to extract punicalagin from pomegranate juice. Suggest both an adsorbent material and eluents.